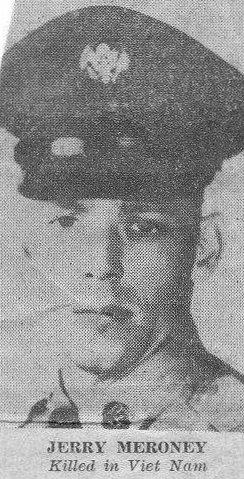 Sergeant Raphnell Jerry Meroney was born on March 5, 1942, and was originally from Chattanooga, Tennessee. He served his country in the Vietnam War as a four-year veteran of the United States Army in C Company, 2nd Battalion, 7th Cavalry Regiment, 1st Cavalry Division. His tour in Vietnam began on November 29, 1965. On January 29, 1966, Sgt. Meroney was killed amidst heavy fighting near Bong Son in Binh Dinh province, South Vietnam. The firefight in Bong Son over January 28-29 claimed the lives of 37 American soldiers; 20 were from 2nd Battalion, 7th Cavalry Regiment, and 14, including Sgt. Meroney, were from C Company, 2/7. Sgt. Meroney was 23 at the time of his death. He is memorialized on the Vietnam Veterans Memorial on Panel 04E, Line 112.

Sgt. MERONEY WAS AWARDED THE PURPLE HEART AND THE BRONZE STAR MEDAL FOR BRAVERY AND HEROISM POSTHUMOUSLY. I ACCEPTED FOR HIM.
–Carol Vaughan