The Erwin Record, December 3, 1942
A message was received last week from the War Department by Mr. and Mrs. Dolph Wilson that their son Ralph, 21, was killed in action, November 8th, in the western European area. Sergeant Wilson enlisted in the Army two years ago when he was only 19. Besides his parents he is survived by his wife and 15-months-old daughter, who live in Brooklyn, New York; four brothers, Corp. Ray Wilson, paratrooper in the Air Corps, Ford, Alvin and Bruce, of Ervin. 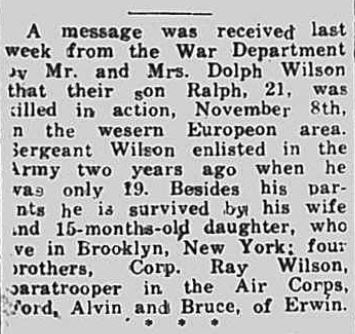