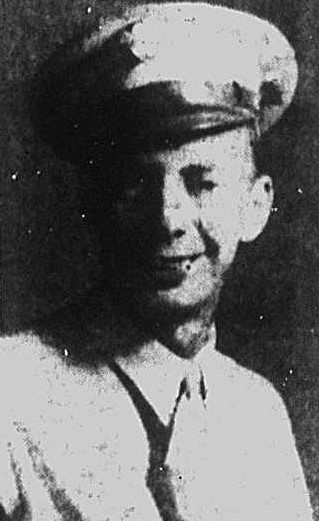 Ralph M. Wattenbarger was born in Baileyton, Tenn in 1914, son of Dorse Milard Wattenbarger and Ella Ruth Kite. He married with Dicie Jenkins in Washington County, Virginia on 29 May 1936. He enlisted on 12 April 1944 at Camp Shelby, Mississippi.
He died 23 January 1945 in France

News article the Kingsport Times News 25 February 1945
Mrs. Ralph Wattenbarger of Elizabethon has been notified by the War Department that her husband, PFC Ralph M. Wattenbarger was killed in action January 23 in France. PFC Wattenbarger, son of D.M. Wattenbarger of P54 Maple Street, entered the service in April 1944, and went overseas in September. He trained at Camp Blanding, Florida and was a member of the infantry. Before coming a member of the Armed Forces he worked with his father for the L.B. Price Mercantile Company, Kingsport.

News article the Kingsport Times 18 August 1948
Elizabethton – Funeral Services for PFC Ralph M. Wattenbarger, who was killed in Kayersburg, France, June 22, 1945 will be held at 2 p.m. Thursday at the Nazarene Church here, with Rev. T.N. Robinson officiating. The body will then be taken to the home of Mrs. Willie Barnett at Baileyton, an aunt of the deceased. A short service will be held at Zion Church on Friday afternoon at 2:00 o’clock. Burial will be made in the Zion Cemetery where the V.F.W. of Greeneville will render full military honors at the grave. The body of PFC Wattenbarger is due to arrive in Elizabethton Wednesdaymorning at 9:52 and will be taken to the Roy Hathaway Funeral Home Chapel, where it will remain until time for the funeral. Survivors include his father, D.M. Wattenbarger of Kingsport, his mother, Mrs. Ruth Kite Broscoe of Chicago, Illinois. Buried at Zion United Methodist Church Cemetery, Baileyton, Greene County, Tennessee Son of Dorsey Milard and Ruth Kite Broscoe Wattenbarger Brother of Alice Gaynell Wattenbarger and Grover Kite Wattenbarger Husband of Dixie J. Wattenbarger Stepfather of Dana Wattenbarger.

The Greeneville Sun, August 18, 1948
Funeral services for Pfc.  Ralph M. Wattenbarger, whose body will arrive in Elizabethton this morning from overseas will be held at the Nazarene Church in that city on Thursday, August 19. The body will then be taken to the home of an aunt, Mrs. Willie Barnett at Baileyton in Greene County. Burial will be made in Zion Cemetery where the VFW of Greeneville will render full military honor at the grave.
Pfc. Wattenbarger was killed in Kayesburg, France on Jan. 22, 1945. He entered the service on May, 1944. Survivors include his father D.M. Wattenbarger of Kingsport and his mother, Mrs. Ruth Kite Briscoe, of Chicago, Ill. 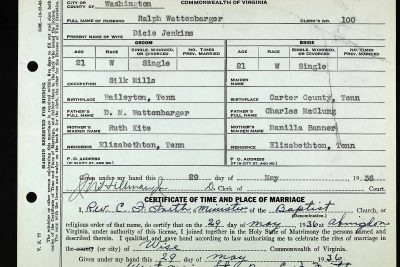 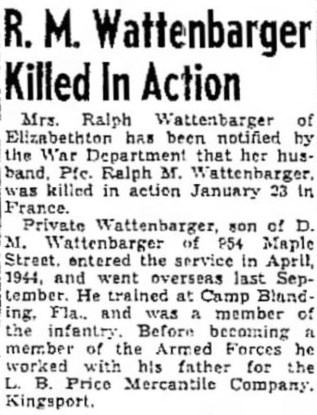 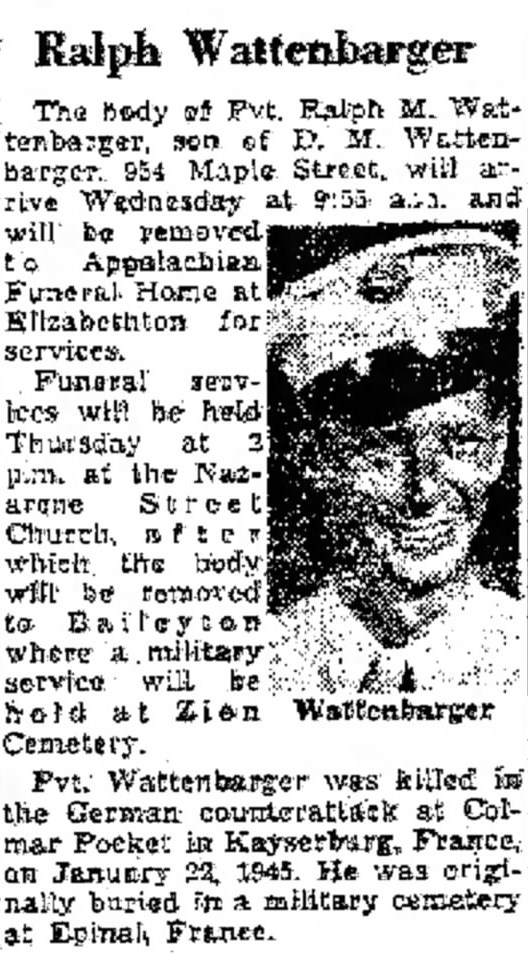 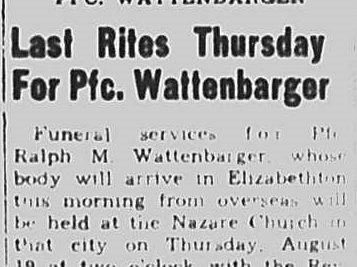