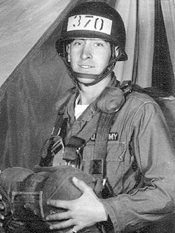 On that day, SP4 Byrd was killed in action when he sustained wounds from small arms fire.