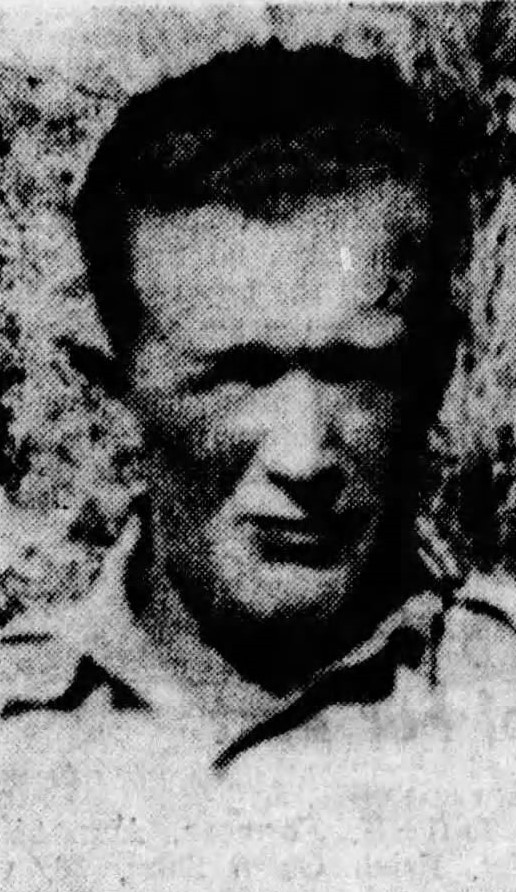 Raymond Stanley Rines, born 1919. He was a medic with the Medical Company, 9th Infantry Regiment, 2nd Infantry Division. He was taken Prisoner of War while tending his wounded comrades in North Korea on November 30, 1950 and died while a prisoner. His remains were not recovered. His name is inscribed on the Courts of the Missing at the Honolulu Memorial.

The Knoxville News-Sentinel, August 21, 1953
Mr. and Mrs. Frank Lyke and daughteer Margaret sit in front of their home waiting to tell another daughter that her husband, Pfc. Raymond Stanley Rines, died in a Communist prison camp. They accepted news of his death calmly, having already decided he must be dead. Mr. Lyle had just slipped his Shoes off after finishing his farm work.

Mrs. Edith Rines and her four children returned to their humble Mt. Horeb community home, after a pleasant visit with friends, to dreaded news that the husband-father had died in a Communist prison camp. Last night on their return, there was no need for the usual vigil by the radio to see if Pfc. Raymond Stanley Rines might be among those prisoners released by the Communists. For shortly before their arrival home, a News-Sentinel reporter had told Mrs. Rines’ parents, Mr. and Mrs. Frank Lyle, that the 35-year-old career soldier was among 43 American prisoners of war the Communists say died in Korean prison camps.
The Lyle family accepted the news with little show of emotion – as if it were the mere repeating of a truth that had been known for months. “But it will be a shock to her (Mrs. Rines),” said Mrs. Lyle “for she’s very nervous already, she’s been dreading but still hoping.”
Mrs. Lyle said she had accepted her son-in-law’s death as a certainty about a year ago after dreaming that he had died in a prison camp.
For Mrs. Rines and Anna Mae, 14, Raymond, 12, Carolyn, 9 and Betty Sue, 5, the news ends more than 30 months of hope for the soldier was captured Nov. 30, 1950. “The last she ever heard from him was a letter she received in 1951,” said Mrs. Lyle. “That was just before he started into a battle in November – the night before Thanksgiving.” The mother in law explained that Mrs. Rines had waited until the following March, hoping for another letter. But none came. Then she wrote to the Defense Department asking about he soldier-husband. “Then they came back with a telegram that he had been missing in action since Nov. 30,” siad Mrs. Lyle. “It was some time after that when she was informed that his name had been heard on a propaganda broadcast as being a prisoner.”
But repeated letters to Pfc. Rines brought no answer. “But she had never given up hope,” said Mrs. Rines’ sister, Margaret Lyle. “She’s been listening to the radio nightly hoping to hear that Stanley was among those released. “But she told me the other day that she had the dreads about his being safe and alive.” Pfc. Rines (his family say they received a letter prior to his capture saying he had just made sergeant) enlisted in the Army, planning it as a career, in May, 1948. That was after a tour of duty during World War II in the Navy during which he was seriously injured as one of few survivors from a torpedoed tanker. “Stanley came back home after the war but never seemed satisfied,” said Mrs. Lyle, “for he seemed to want to be back in service. He worked aournd here as a carpenter and painter.”
His enlistment in the Army followed shortly and he was sent to Korea as a medical corpsman in Aug. 1950. The Defense Department in releasing the list last night, sixth of its kind, emphasized that the Communist report have not been verified. Mrs. Lyle cautioned The News-Sentinel against going to friends’ home to see the wife, canning firm employe here, and children.” I’d like to tell her here,” she said, “so we can take care of her.”
Mrs. Lyle said she had been attempting to prepare her daughter and older grandchildren for “Stanley’s death” fors ome time, for she knew news of it was to come. 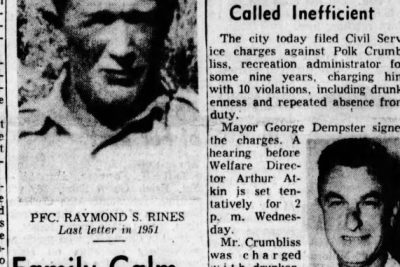 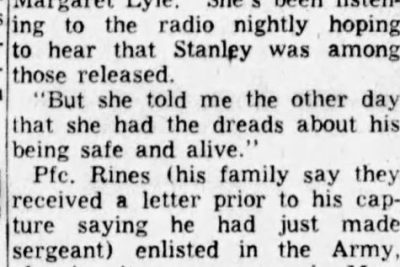