Porter Lee St. John was born at Bluff City, Tennessee on July 2, 1897 to William Berry St. John and Hattie Williams St. John. Both of his parents died before Porter was ten years old and he remained in the home with his five brothers and sisters.

He died February 17, 1919 at Grand Island, New York in Erie County. He is buried at the Saint John Cemetery in Sullivan County, Tennessee.

Porter L. St. John served on the U.S.S. Winchester.
While the ship was near City Island, New York City, he was serving with the starboard wire crew. The wire which they were handling became fouled in the rail and carried away a section about 4 or 5 feet long. In attempting to free the wire, he lost his footing and fell through the opening in the rail, went overboard and was drowned. 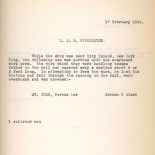 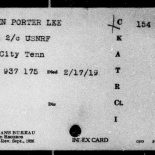 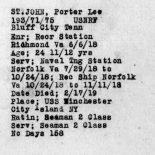