Peter Tom Zecchini was born in 1922 in Tennessee, the son of Peter and Odessa Zecchini. He had two younger brothers, John Joseph Zecchini and James Anthony Zecchini.
His father was born in Anfo, Italy on 16 July 1871 as Pietro Thomas Zechini. He had a twinbrother, Thomas Peter Zecchini, the father of Julia Zecchini who died in active service in 1944.

Petty Officer Zecchini (also spelled Zechini) was lost in the sinking of the USS Dorchester on 3 February 1943. He was officially declared dead on 4 Feb 1944. Per the USCG Historian Office, personnel listed as missing at sea are declared dead after one year. The Dorchester is most known for the four chaplains who gave their life jackets to save others and went down with the ship.
–Submitted by William Terry

The sinking of the Dorchester is well known; among its passengers and crew lost at sea were four Army chaplains– Methodist minister the Rev. George L. Fox, Reform-Rabbi Alexander D. Goode (Ph.D.), Roman Catholic priest Father John P. Washington, and Reformed Church in America minister the Rev. Clark V. Poling. Known as the “Four Chaplains” or the “Immortal Chaplains,” their loss has been commemorated in several books and documentaries; a unique medal awarded by Congress in 1960; and with a stamp, and each February 3 is “Four Chaplains Day,” by act of Congress. 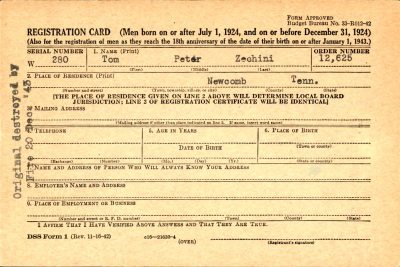