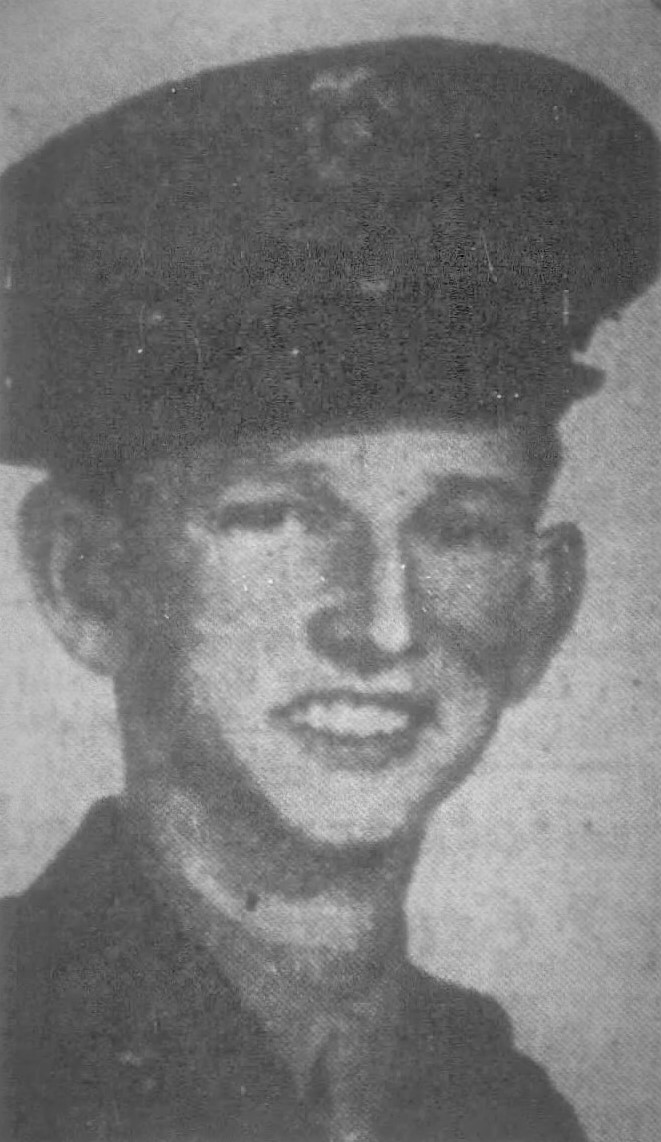 Paul Tipton Baker
Corporal Baker was a member of Company F, 2nd Battalion, 5th Marines, 1st Marine Division. He was killed in action while treating a comrade for wounds near Seoul, South Korea.

Note: He died ten days after his unit, the 2nd Battalion, 5th Marines, had come ashore during the famous Inchon landing.

THE SEARCH FOR PFC PAUL TIPTON BAKER, KIA. WHERE IS HE LAID TO REST? MISSION ACCOMPLISHED

Comments: Our search was twofold. First, we were looking for family who might still be alive, who were related to Pfc. Baker, and second, find where he was layed to rest.

With our Tennessee friends assistance, we found Pfc. Baker’s obithuary in the Chattanooga Newspaper. Our friend Ed tracked down the cemetery where Pfc. Baker was buried. Ed also found Paul’s oldest sister, Mrs. Crisp, who resides in Chattanooga.

My Parents were planning a trip to Atlanta, and took a day trip over to Chattanooga. They met with Ed, visited with Mrs. Crisp, who unfortunately is suffering from senility or Alzheimers. She remembered very little and could only find a picture of Paul, when he was six years old.

My parents, then went to Greenwood Cemetery. There, they found the bronze plaque bearing Paul’s name, along with his new rank. Cpl. Paul Tipton Baker. My father placed a bronze flag holder with an American Flag and red, white, and blue flower arrangement. He said his prayers to this brave man, thanking him for his life.

The story does not end there. Since my Father’s visit to Chattanooga, we have done more searching, including what happened after September 24, 1950.

My Father knows that Paul died, not on Sept. 25, 1950, as his records with the military say, but September 24, 1950. My Father said, they were just outside of Seoul, when he awoke, stood beside his foxhole, and reached for his weapon. He was instantly shot, the bullet going through his right leg, shattering bone, before entering into his left leg. He said a Marine he vaguely knew, ran over to his side and pulled him into the foxhole. That Marine was Pfc. Baker. My Father said he heard another shot, and Pfc. Baker did not move.

A Medic came to check on Pfc. Baker, pulled him off from my Father, and assisted my father with dressings for his wounds and pain medication. When my Father asked about Pfc. Baker, the Medic shook his head. They were unable to evac my Father for several hours. When they did, they couldn’t remove Pfc. Baker’s body until the next day.

Also, since the visit to Chattanooga, my Father has talked more about that day. He is receiving counseling for Post Traumatic Stress Disorder. Through other information from the military, we also found out that Paul’s family did not know the circumstances of his death. He is listed as Killed In Action.

The Journey, my Father and I started last fall does not have a Happy Ending. It never will. There is no such thing as closure. There never will be, especially when it comes to War. There is only a search for inner peace, and that can be accomplished with your loved ones.

We continue to search for more of Paul’s family, to let them know of Paul’s heroic act. We know he had five sisters, who live around the Chattanooga area.

In the meantime, with our help my Father will continue to heal and put his demons to rest.

Pfc. Paul Tipton Baker saved my Fathers life almost 55 years ago, at the risk of his own. Through new friends, including Sid Shown, TNMOPH and Ed Tankesley, from Chattanooga, TN, we were able to accomplish our mission.

The Chattanooga Sunday Times, October 8, 1950
Cpl. Paul T. Baker of Tyner has been killed in action in the fighting in Korea. Baker was with the Fifth Marine Division. He enlisted in the marine corps at 17, four years ago after attending Tyner High School. He was killed Sept. 25. Survivors are his parents, Mr. and Mrs. J.W. Baker of Battery Heights, and five sisters, Misses Annabelle, Joyce and Imogene Baker, Mrs. W.T. Crisp, Lima, Ohio, and Mrs. J.D. Hampton, Georgetown. 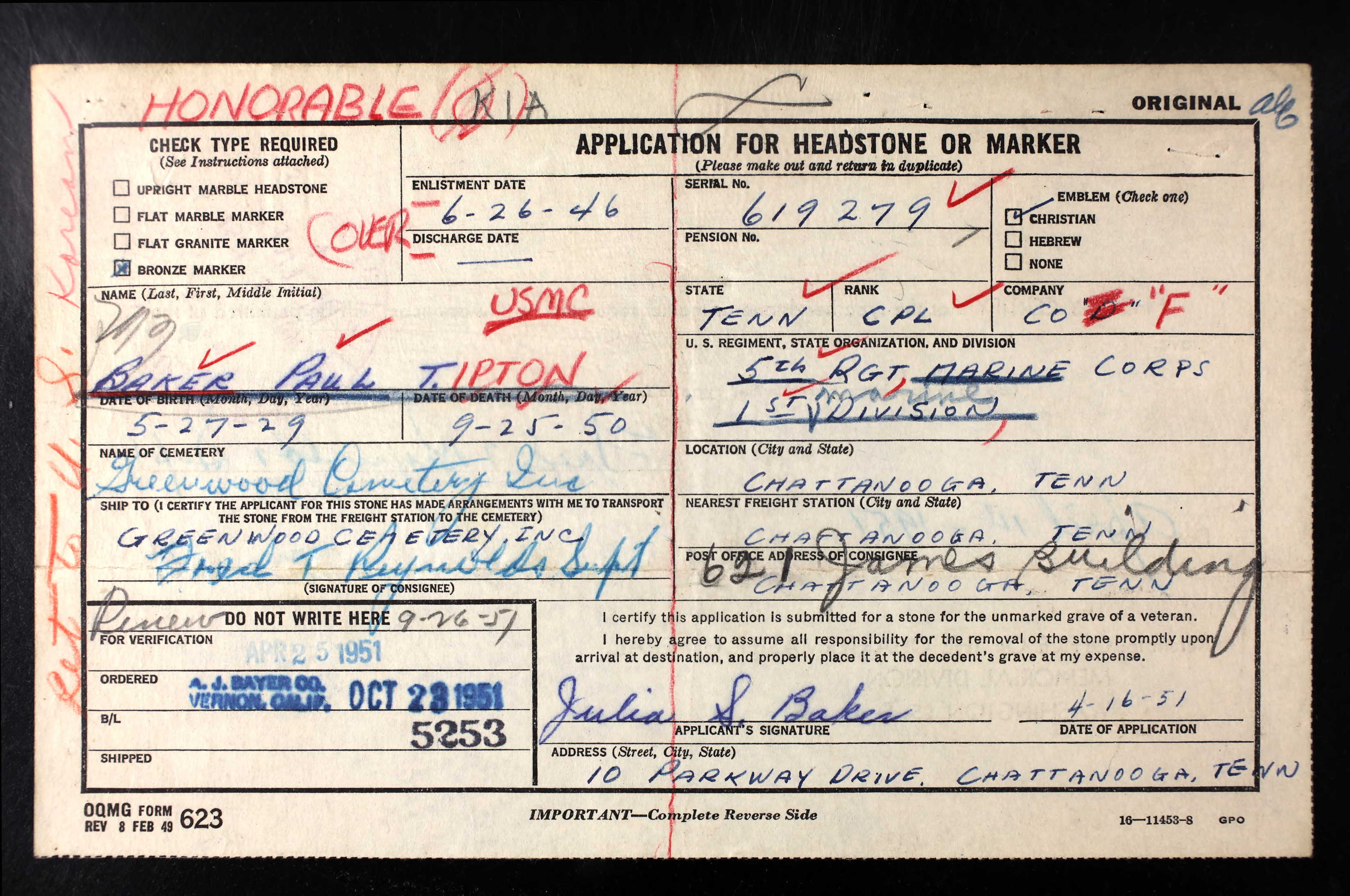 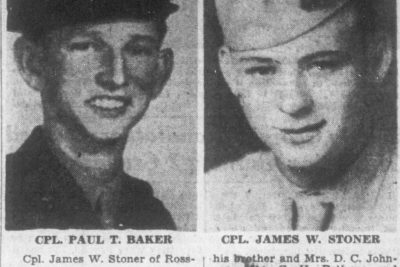