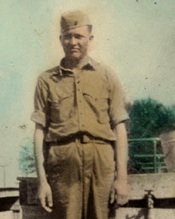 According to the book Hell in the Pacific by Jim McEnery, Private Gunter died during a bayonet charge that successfully cleared a ditch of hundreds of Japanese riflemen who along with 75-millimeter field pieces and a dozen machine guns had the battalion pinned down in the afternoon with temperatures approaching 100 degrees. Lt. Charles Kimmel decided to at least attempt a charge instead of just taking it from the Japanese and he organized a wave of about 100 marines with fixed bayonets to charge the Japanese who were caught off guard. Japanese casualties were about 400 killed – those wounded refused to be captured and fought to the death or used grenades to kill themselves.
-Submitted by Tom Stallings