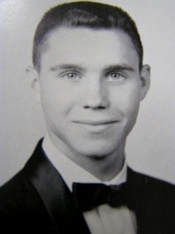 Senior Master Sergeant Paul Leonard Foster was born on November 20, 1945 and was a graduate of Young High School Class of 1963, Knoxville. He served with the 606th Air Commando Squadron, 56th Air Commando Wing, 7th Air Force. He died on December 29, 1967 at the age of twenty-nine in Laos.

On December 29, 1967, Captain Carlos Cruz, pilot; then-Captain William Potter, navigator; and Staff Sergeant Paul Foster, aerial gunner, comprised the crew of an A-26A Invader that departed Nakhon Phanom Airfield on an operational mission to interdict NVA activity in an area of Laos adjacent to the demilitarized zone (DMZ) separating North and South Vietnam. The twin-engine A26 Douglas Invader is the attack version of the venerable B26, which was one of the first aircraft to arrive in Vietnam with the 1st Air Commando Squadron in October 1961 as part of the “Farm Gate” detachment. Powered by two Pratt and Whitney radial engines with three-bladed reversible propellers, the A26 first began life during World War II with that original designation at times resurrected during Vietnam. It could carry eight forward-firing 12.7mm machine guns plus various combinations of bombs and rockets exceeding 10,000 pounds. While assigned to the South Vietnamese Air Force, the Invaders were flown by American aircrews. They repeatedly proved themselves as a valuable air asset against the Viet Cong throughout South Vietnam and Laos.

At 1:58 p.m., as the Invader made an attack pass on its target, it was struck by enemy ground fire and seen to crash on the east side of a mountain with a jungle-covered valley continuing on to the east. This location also placed the crash site approximately three miles southeast of Ban Namm, twenty-three miles northwest of Muang Xepon, Savannakhet Province, Laos; as well as twenty-five miles west of the Lao/South Vietnamese border and fourteen miles south of the DMZ.

Within days before this flight, Premier Souvanna Phouma of Laos reported the incursion of North Vietnamese troops into his country. Further, he stated that the communists launched a general offensive against his Royal Lao forces in southern Laos. While the North Vietnamese denied fielding troops against the Lao, there was ample intelligence to refute their claims.

Likewise, this area of eastern Laos was considered a major artery of the infamous Ho Chi Minh Trail. When North Vietnam began to increase its military strength in South Vietnam, NVA and Viet Cong troops again intruded on neutral Laos for sanctuary, as the Viet Minh had done during the war with the French some years before. This border road was used by the Communists to transport weapons, supplies and troops from North Vietnam into South Vietnam, and was frequently no more than a path cut through the jungle-covered mountains. US forces used all assets available to them to stop this flow of men and supplies from moving south into the war zone.

Carlos Cruz, William Potter, and Paul Foster were among nearly 600 Americans who disappeared in Laos. Many of these men were known to be alive on the ground. The Laotians admitted holding “tens of tens” of American Prisoners of War, but these men were never negotiated for either by direct negotiation between our countries or through the Paris Peace Accords, which ended the War in Vietnam since Laos was not a party to that agreement. In early 1993, a joint American/Lao field team excavated the Invader’s crash site. In addition to aircraft wreckage and personal effects, the team recovered bone fragments later identified as the mortal remains of Carlos Cruz, William Potter, and Paul Foster. All three are buried together in Arlington National Cemetery, Arlington, Virginia.

“Paul and I were friends and were on the same mission, different aircraft. He was on the A-26 and I was kicking flares on a UC-123. The downing was at 0158 and not 1358 on 29 Dec 67. Thank you. Would like to have contact info of daughter that he talked about.”
–Submitted by friend and veteran, K. Burton

“I am wanting to know if you have contact information for family members of the soldiers on your memorial. I have worn the name of one of these soldiers on my wrist since July of 1988. I have worn this bracelet every day, with the only exceptions being when it had to be removed for medical procedures. I fought to wear it in uniform, (by finding a loophole), before the regulations were changed to specifically allow MIA/POW bracelets.

I just recently, (within the last few days), found out that his remains had been found and repatriated in 1993.

I would like to give the bracelet to a surviving family member if at all possible. The soldier is: SMSGT Paul L Foster, USAF. Any assistance would be greatly appreciated.