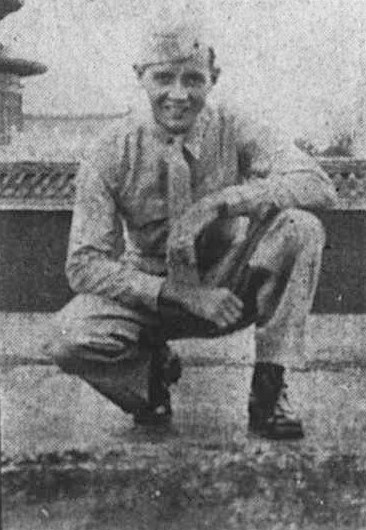 Paul Edward “Tommy” Armstrong was born in Rogersville, Hawkins County, TN, son of Winfield Scott Armstrong and Cora Penelope Vaughn. Enlisting in the Marines in 1939, Sgt. Armstrong served one enlistment and joined up for further service in Shanghai, China. When the storm broke over the Philippines he was rushed to the scene of action and died gallantly fighting the Japanese.
He is memorialized at Manila American Cemetery in the Philippines and at the McKinney Cemetery in Rogersville, TN

Rogersville Review, July 8, 1943
Word came to Mr. and Mrs. Wint S. Armstrong on July 1st that their son, Paul E. (Tommy) had been killed in action in the Philippine Islands. Tommy, who was in the Marine Corps, had previously been reported missing. The telegram from T. Holcomb, Lieut-Gen. U.S. Marine Corps, read as follows:
“Deeply regret to inform you, cablegram from International Red Cross Tokyo, Japan reports that according to American officer held prisoner of war your son Sergeant Paul E. Armstrong, U.S. Marine Corps, has been carried on the records of his headquarters as missing in action was killed in action in the Philippine Islands. Date nog given. Please accept my heartfelt sympathy. Letter follows.”
Mr. Armstrong still refuses to believe that his son is dead, and that there is a possibility that he is in a Jap prison camp. He was first notified that the boy was missing when the Philippines fell. Tommy was believed to have been on Corregidor when that bastion of U.S. defense went down before the overwhelming number of Japs.
Tommy joined the Marines several years ago. His weight at first prevented him from enlisting but he came home, ate lots of bananas and finally was accepted. He worked at the Sweet Shippe at the time of his enlistment. Mr. Armstrong said Tommy’s enlistment ran out while he was in the Far East and that he re-enlisted. He had not been home in several years.