Private Paul C. Coile was born on February 22, 1925. He served in Company B, 163rd Combat Engineering Battalion. He died on July 11, 1943. His death is listed as died non-battle. He is buried in Lynnhurst Cemetery in Knoxville.

The Knoxville News-Sentinel, July 12, 1943
Pvt. Paul C. Coile, 18, was drowned while swimming in a lake near Camp Van Dorn, Miss., yesterday, his parents, Mr. and Mrs. H.L. Coile, 2016 Linden Avenue, were notified. “His platoon was out in the middle of the lake. He swam out to them and had started back to the shore when he apparently got a cramp and was drowned,” a brother, Boyd T. Coile, said. “He was a good swimmer.”
Pvt. Coile was inducted last February. He attended Park Junior High School. The body probably will reach Knoxville Wednesday. Survivors in addition to the parents are three brothers, Boyd, Claude E. and Bruce H. Coile, and a sister, Mrs. N.S. Dougherty. 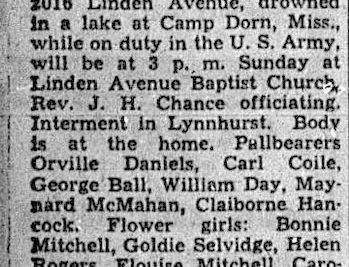 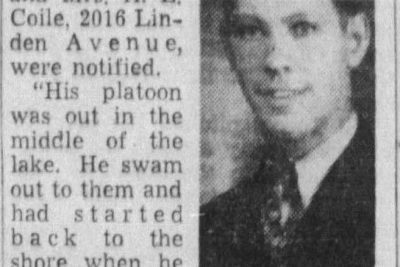