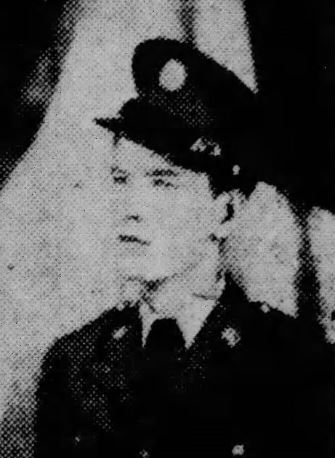 Paul Fansler died at Strawberry Plains Pike, Knox County, Tennessee due to a fracture of the skull caused by an auto accident. He was a passenger of a car which collided with a truck.

The Kingsport Times, 9 November 1941
Four dead in highway accident. Three of victims from Kingsport; Five are injured.
Four persons are dead and five others are in hospitals, three in a serious condition, as the result of highway accidents in this area and Knoxville Saturday. Three of the dead were Kingsport residents.
The dead are:
John Jones Jr., 21, Old Kingsport; Pvt Paul Fansler, 18, Old Kingsport; George Keener Hutchins, 22, Fordtown; Shelton Chandler, 22, Chilhowie, Va.
Injured were: Howard Davis, 19, Old Kingsport; John Hartgrove Jr., 19, Old Kingsport; Eldon Chandler, Childhowie, Va.; Mattie Gilley, 73, Bloomingdale road; George Cutsinger, Johnson City.
Hutchins and Mrs. Gilley were struck by automobiles while walking along highways near Kingsport and Chandler was involved in an auto collision near Johnson City. The other four were in a collision near Knoxville.
Jones and Fansler were instantly killed Saturday afternoon and Davis and Hartgrove injured when the car in which they were riding plowed into a heavily laden truck two miles east of Knoxville on the Lee highway.
Jones is son of Mr. and Mrs. John Jones of Old Kingsport and Fansler is the son of Mr. and Mrs. Lige Fansler, also of Old Kingsport.

Davis was reported in the Knoxville General hospital in a serious condition last night. He received a badly cut tongue and possible head injuries, attendants said, Hartgrove, also of Old Kingsport, was treated for cuts and bruises.
According to Chief Ed Tayloe of the State Highway Patrol, the machine driven by Fansler was traveling at a high rate of speed when it struck the truck loaded with tile. Tayloe said that the men were headed west toward Knoxville, and the truck was leaving the city. The car was demolished. Tayloe said that the young men were enroute from Kingsport to Camp Forrest where Fansler was a private in the 191st Field Artillery. He had visited his family in Kingsport. The other three men were said to have been taking him to the camp. 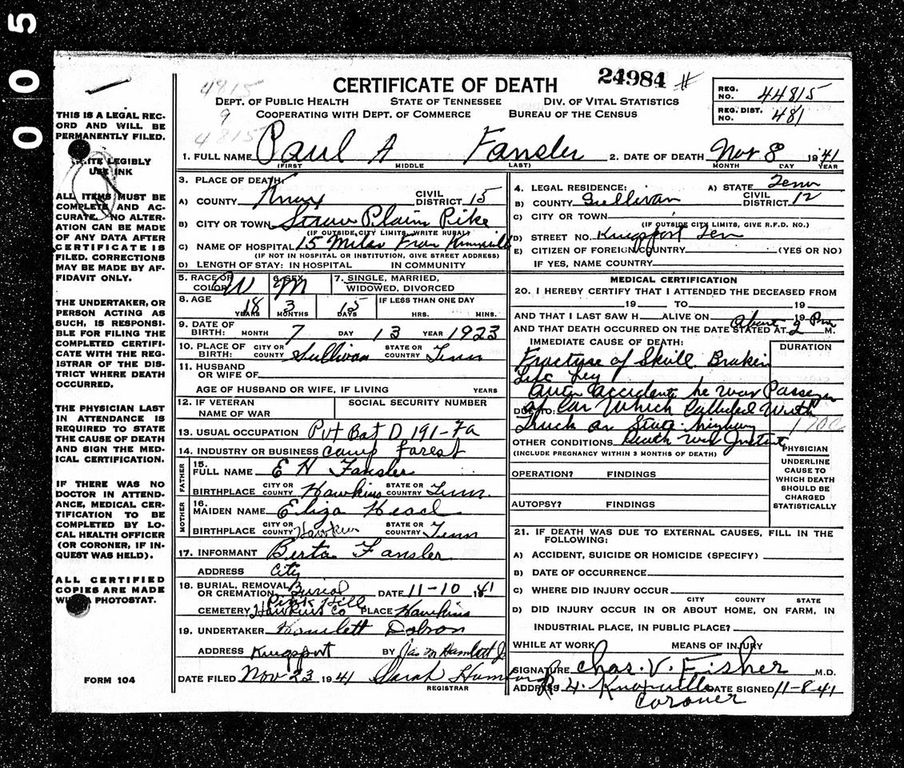 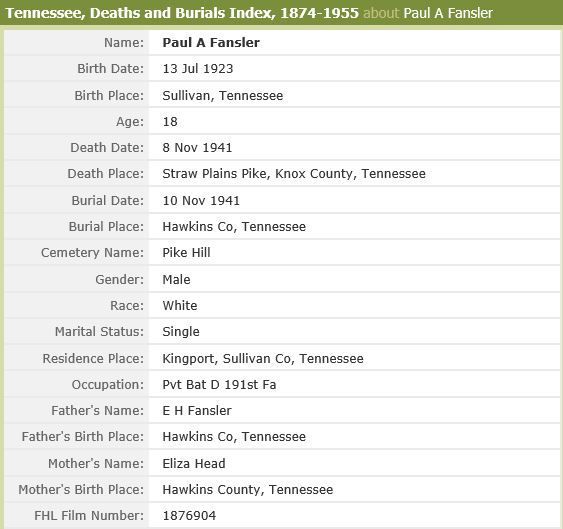