A leukemia victim, Sgt. Anderson was returned to the United States from the Southwest Pacific Jan. 20 and placed in an Army Hospital. He was never able to come to Knoxville to see his parents. However, they were able to visit him twice before his death.

He attended Rose Avenue Grammar School and was a graduate of Bearden High School. Had served 3 years in Army Medical Corps, 2 and one half years in West Pacific. Member of Middlebrook Pike Baptist Church. 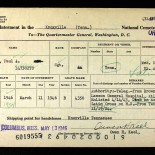