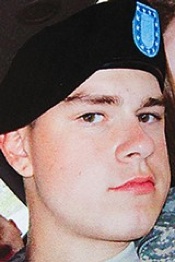 Patrick S. Fitzgibbon, “St. Patty” of Knoxville, TN. The eldest of six children, Patrick was funny, a bit of a rebel, and a huge practical joker. Making other people laugh was a big part of Patrick’s life, and he especially enjoyed making comedy videos, some of which are posted on You Tube. He was attending South Doyle High School when in his senior year he decided to drop out and get his GED. A member of the JROTC in school, he decided to get his life together and following in the footsteps of a cousin, he enlisted in the Army in December of 2008. He graduated from basic training at Fort Benning, Georgia, and is remembered by his fellow soldiers there as a crack-up, always finding a way to break up the tension. Transferred to Fort Carson, Colorado, he deployed to Afghanistan in May of 2009, assigned to the 1st Battalion, 12th Infantry Regiment, 4th Brigade Combat Team, 4th Infantry Division. He was one of three soldiers killed when insurgents attacked their patrol with improvised explosive devices and rocket-propelled grenades. Patrick was very proud to be serving in the Army, and felt this was his duty. His medals include National Defense Service Medal, Afghanistan Campaign Medal with Campaign Star, Global War on Terrorism Service Medal and the Army Service Ribbon.