Rogersville Review, March 1, 1945
All of Rogersville and Hawkins county were plunged into grief on Thursday morning of last week when word got around that Mr. and Mrs. Pat Davis had received a telegram from the War Department stating that their son, Lt. Pat Davis Jr., had been killed in an airplane crash on Oahu, Hawaii. “Young Pat”,  as he was known in and around Rogersville, was 22 years old and had been in the armed forces since September 1941 when he volunteered for service in the army air forces reserves. He was a Rogersville high school graduate and had just been graduated from the University of Tennessee in June before he entered service. He received his basic training at Keesler Field, Miss., and spent five months as a cadet at Tennessee Polytechnic Institute, Cookeville. He received his wings at Selma Field, Ala., in June, 1943, and did extra training at Lincoln, Nebr. And Goven Field, Boise, Idaho. His last traning was in radar at Langley Field and while there he got home three days, just before Christmas. He shipped out from Sacremento, Calif.on the night of the 13th. The last communication the Davises had from him was a letter date don the 15th in which he said he had been in Hawaii about 20 hours. The family thinks from that he was probably on his way somewhere else when the plane crashed. So far, no other details are known.
He is survived by his parents, two sisters, Minnie and Irene; and two brothers, Burleigh, in boot training at Great Lakes, Ill., and Joe at home. 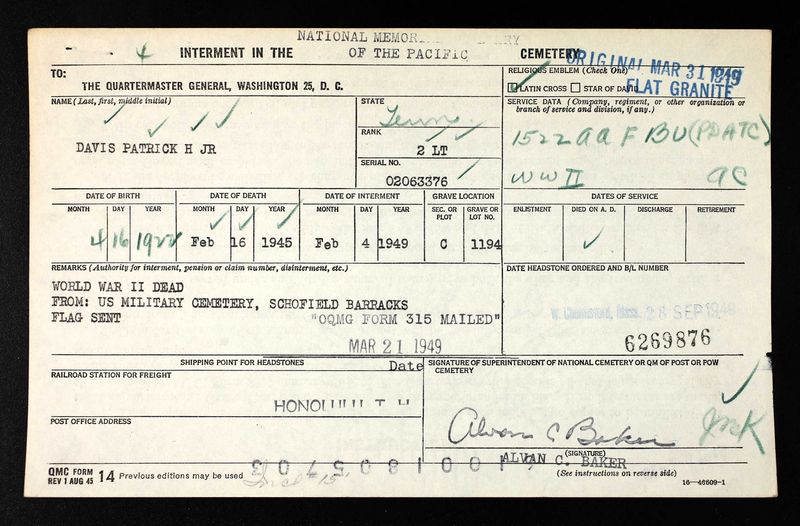