He entered the service from Virginia and also last resided there.  His name is spelled as Overbey as well as Overby.

Remains of World War II Soldier to Return to Tennessee

NASHVILLE – Tennessee Gov. Bill Haslam and Department of Veterans Services Commissioner Many-Bears Grinder recognize the service and sacrifice of United States Army Air Forces Private Evans Overbey of Elizabethton was serving with the 93rd Bombardment Squadron, 19th Bombardment Group during World War II.  Overbey was reported to be captured in the fall of Corregidor.  Nearly 2,800 prisoners of war died in the Japanese-operated camp at Cabanatuan on the island of Luzon, Philippines.  Overbey along with 12 other servicemen and one American civilian died on November 19, 1942 from malnutrition and medical neglect while in the camp hospital.  He was buried in a common grave in the camp cemetery.  He was 25 years old.

“More than seven decades have passed since Evans Overbey left home to serve his country in World War II,” Haslam said.  “There is reverent closure in finally bringing him back to his home state to be buried among our fallen heroes where his family will be joined by his community to offer an appropriate farewell.”

“It is an honor to be able to finally lay this soldier to rest in a field of honor on his home soil,”  Grinder said.  “Although I am grieved that his parents were not able to live to see this day, his nieces and nephews will now have confirmation that their Uncle Evans is home and Tennessee is grateful for his valiant sacrifice.”

Overbey’s remains will arrive at the Tri-Cities Regional Airport at 2525 TN-25 in Blountville on Tuesday, July 12 at 8:10 p.m. (EDT).  Media planning to attend the dignified transfer of remains at the airport will need to meet the Tri-Cities Regional Airport Public Safety Officer at the Air Services Counter between 7:45 p.m. and 7:50 p.m. (EDT).  Further instructions will be provided at the Air Services Counter.  Interviews with family members will not be provided during the dignified transfer of remains.

Overbey is survived by his niece and nephews Grace Erwin and Phillip Erwin of Erwin, Tennessee.  Other surviving nieces and nephews include Vernon Rose, Vernon Rose, Jr., Kenneth Sanger, Jeannette Spiesman, Phyllis Ann Willoughby of Ohio as well as Delorse McCauley of North Carolina and Wanda Murray of Colorado.

The remains of a World War II soldier with upper East Tennessee ties who was reported captured in the fall of Corregidor and who died in 1942 will be buried at a cemetery in his home state this week.

Pvt. Overbey grew up in Coeburn, Va., but his, parents were from Elizabethton, Tenn., and has remaining family in Erwin, Tenn.

On Dec. 8, 1914, Japanese bombers attacked American forces at Clark Field in the Philippines, killing 55 and wounding 150. After a surrender by troops in April 1942, Pvt. Overbey and other survivors were forced to march in the infamous 65-mile Bataan Death March northward to prison camps in Luzon. Reports indicated that Pvt. Overbey survived the march, but of died of malnourishment and medical neglect. He was buried in a common grave in the camp cemetery.

He received a hero’s welcome Tuesday at Tri-Cities Airport. As hundreds looked on, Pvt. Overbey’s casket, draped in a U.S. flag, was transferred from a Delta MD88 aircraft to a waiting black hearse.

Burial will be 2:30 p.m. Friday at Mountain Home National Cemetery in Johnson City. Attendees are asked to meet at the cemetery by 2:05 p.m.

At the ceremony, U.S. Rep. Phil Roe, R-Johnson City, will provide medals and a POW/MIA flag, along with medals for the family. A fly over will also occur during the service.

Gov. Bill Haslam has declared a day of mourning and ordered flags flown at half-staff on Friday in honor of Pvt. Overbey’s sacrifice.

This is my great uncle whom I am proud of for his service of our country.
–Submitted by his great-niece, Lillian Yemma 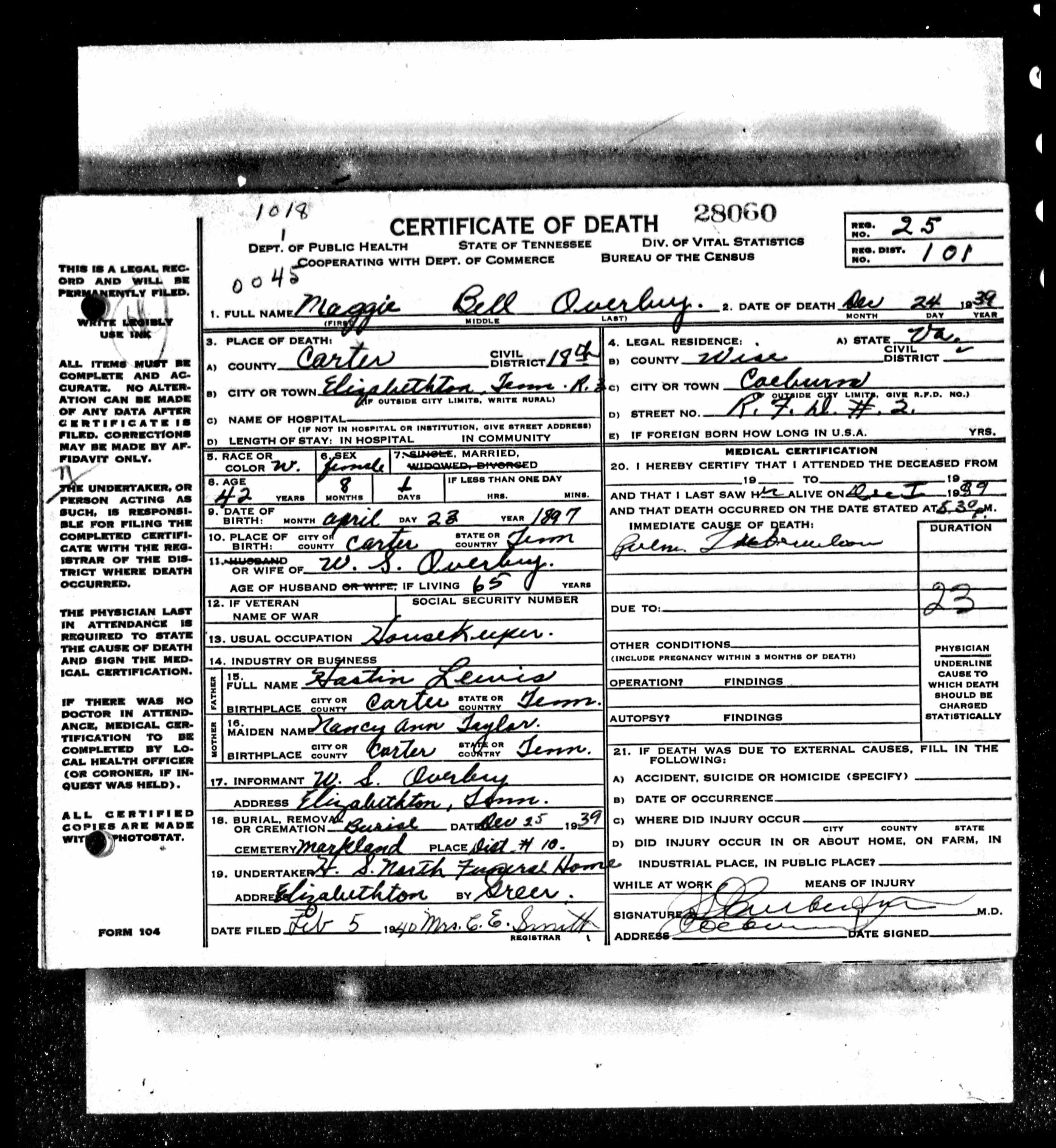 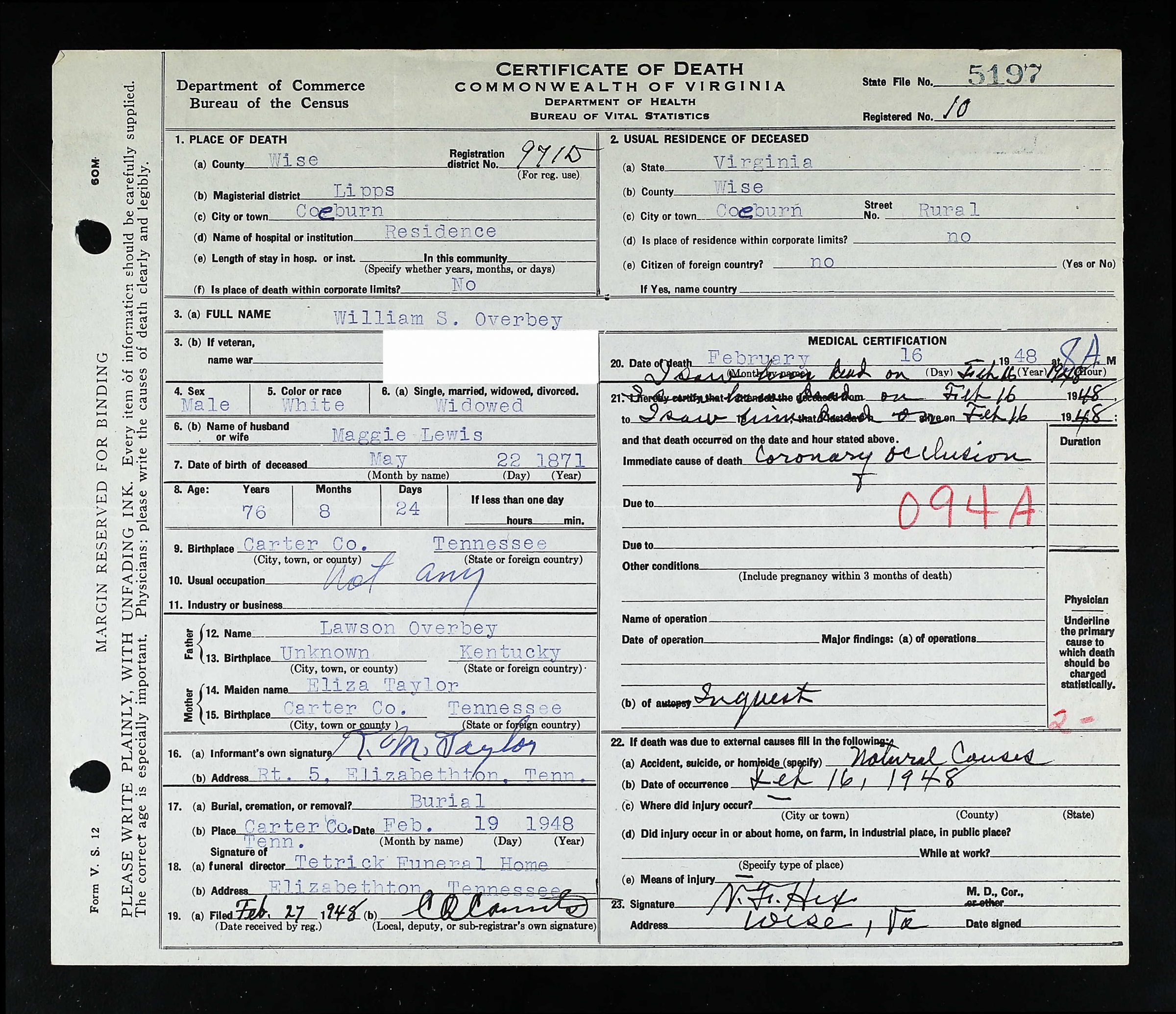