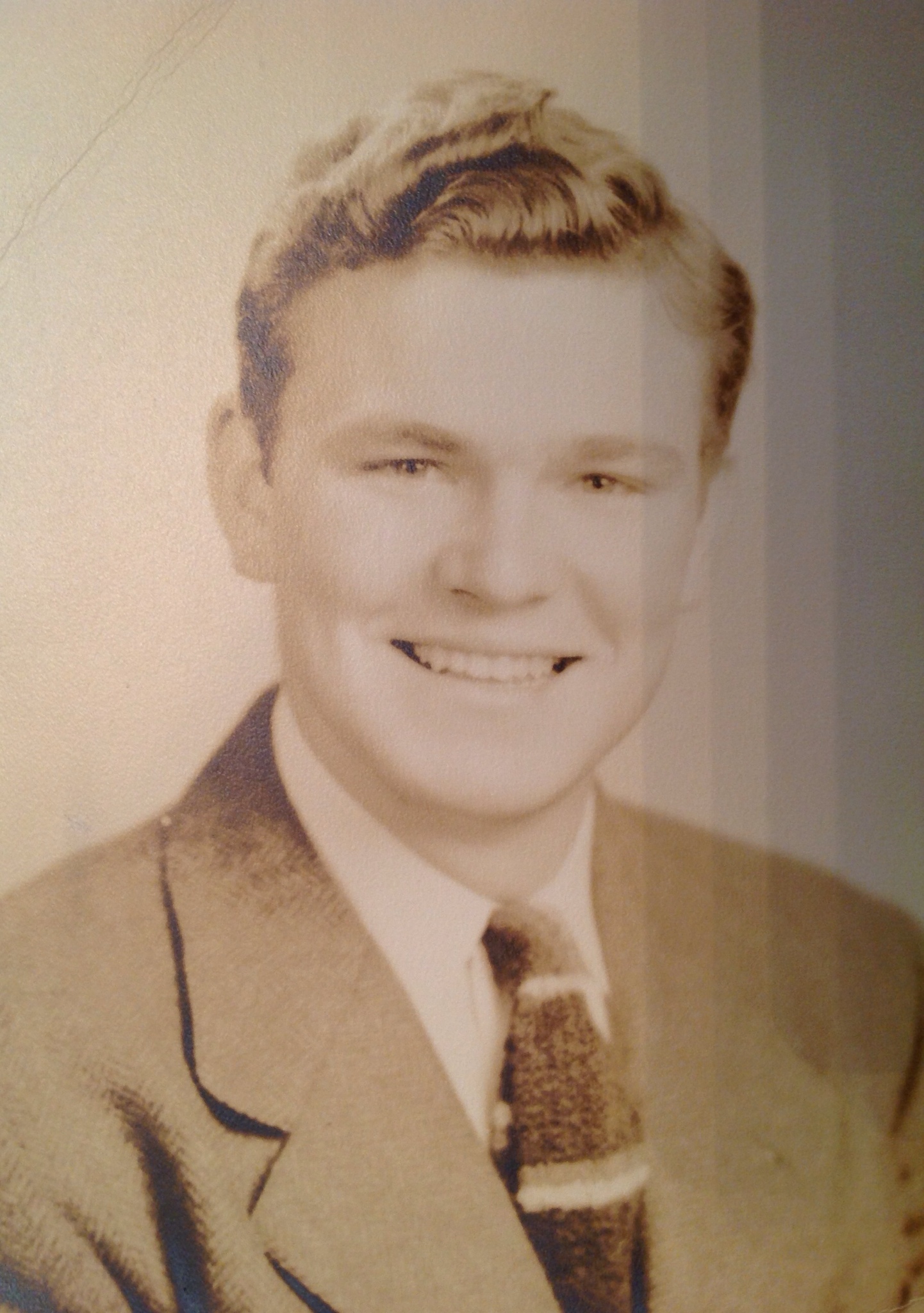 Aircraft B-17G with serialnumber 44-6430 departed from Tortorella Landing Ground in Italy on an operational bombing mission to the Marshalling Yards at Maribor, Yugoslavia. The aircraft crashed near Marburg (Maribor) on the river Drau (Drazska) in Yugoslavia. According to the Engineer, Sgt. Proffitt bailed out after the aircraft got her first hit which was after they hit the I.P. It is believed that Sgt. Proffitt could have been shot at while coming down, like some of the other crewmembers.

Statement from 1st Lt. Edward M. Grey
Within a few seconds before bombs were away I happened to see an object come spinning downward from the above plane. As it approched, I made it out as a complete three-bladed propeller intact and surmised the fore part of number 1 engine received a direct hit. About the same time, I noticed this engine burning from the fore part with flames extending the length of the nacelle which definitely looked as if his cylinders were hit.
Shortly after, the plane started to veer back and in towards the rear element which caused considerable confusion. Then, the pilot seemed to start a very slow turn to the right, losing considerable altitude. All this time while the plane was in sight, it appeared to me as if the fire was an engine fire and not a wing gasoline fire, but its intensity was growing.
After the plane went out of sight of the cock-pit and was a good two-thousand feet below us, my crew began to call off chutes coming out. In all, they counted seven, but said there might have been more as the plane was rapidly going out of sight.

Statement from 2nd Lt. Dean C. Kuhn, Bombardier
I was flying lead, and plane number 430 was on our right wing. As we went on the run, our indicated altitude was 15,700 feet, or a true altitude of 14,720 feet. Flak was not intense, but very accurate. WE had several very close bursts and when I turned around to observe whether we were hit, I noticed a very close burst at the engine of number 430; a moment later the waist gunner said it was going down in flames. The tail gunner said six chutes were seen, but he did nog see it crash. Just a little later, another ship from a following squadron went down in flames also. All the ships were hit quite a lot, and although there probably weren’t many guns there, the altitude was the main cause for so much damage. I also think the flak was more intense than anticipated due probably the mobile and uncharted gun batteries. 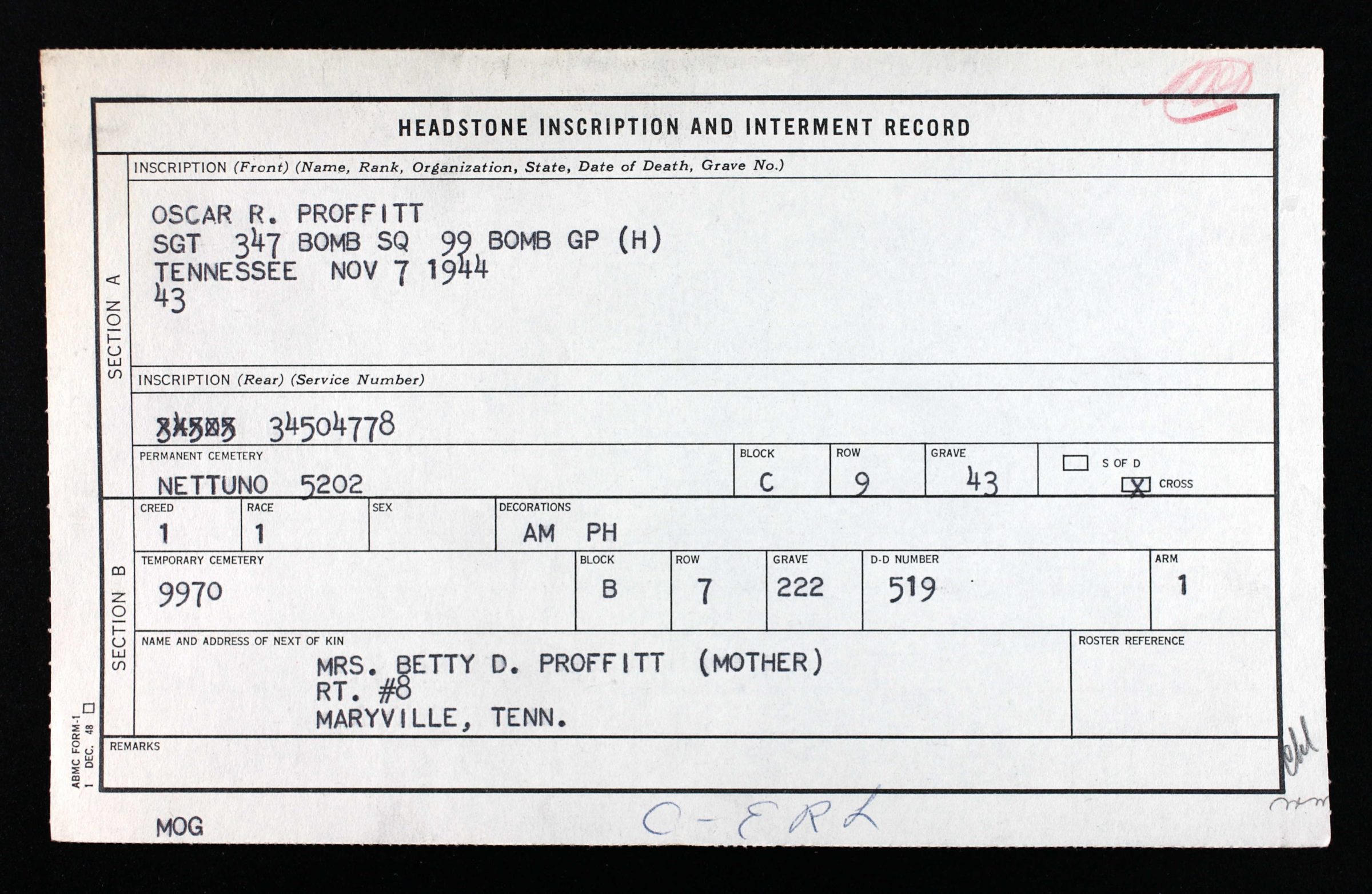 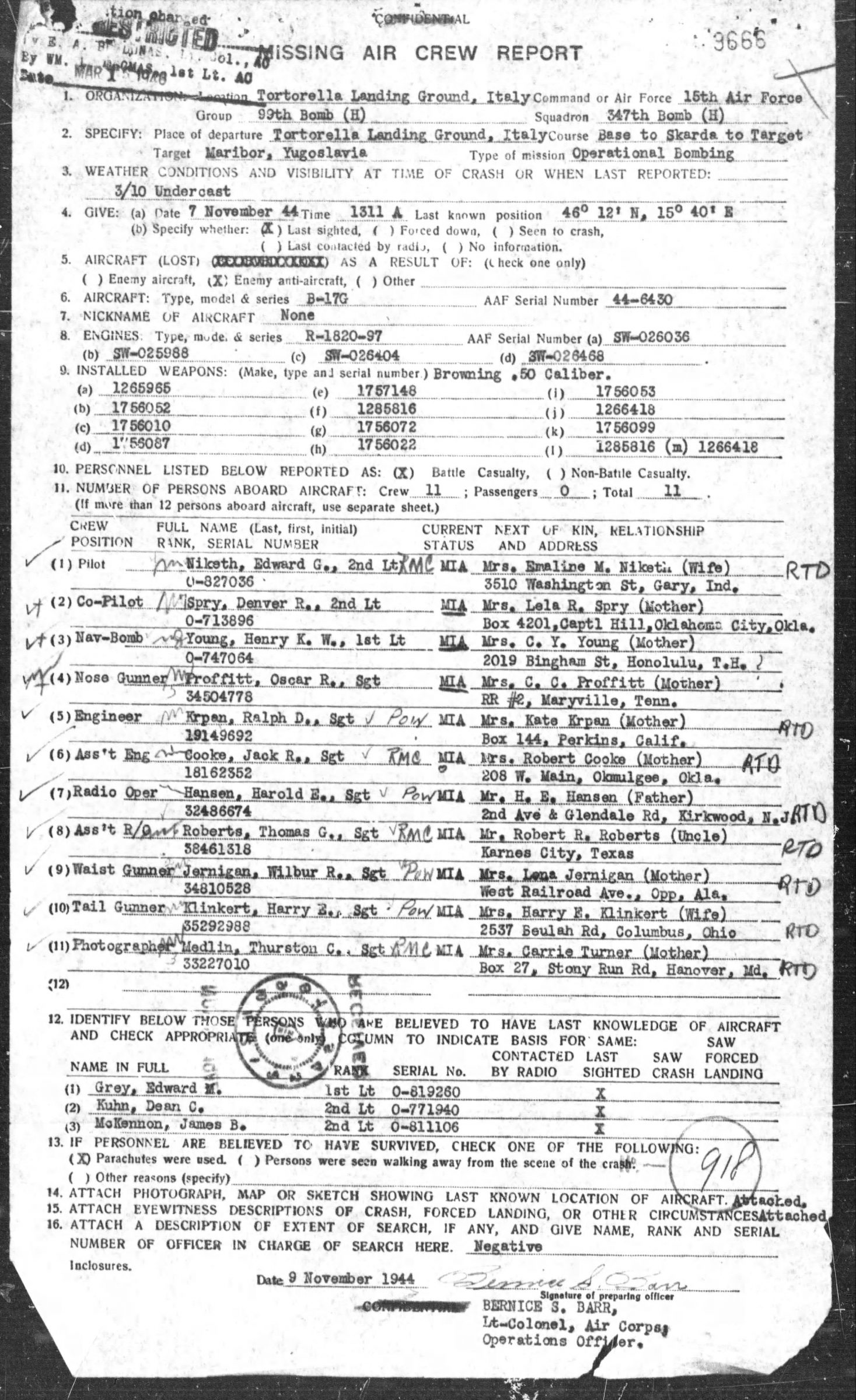 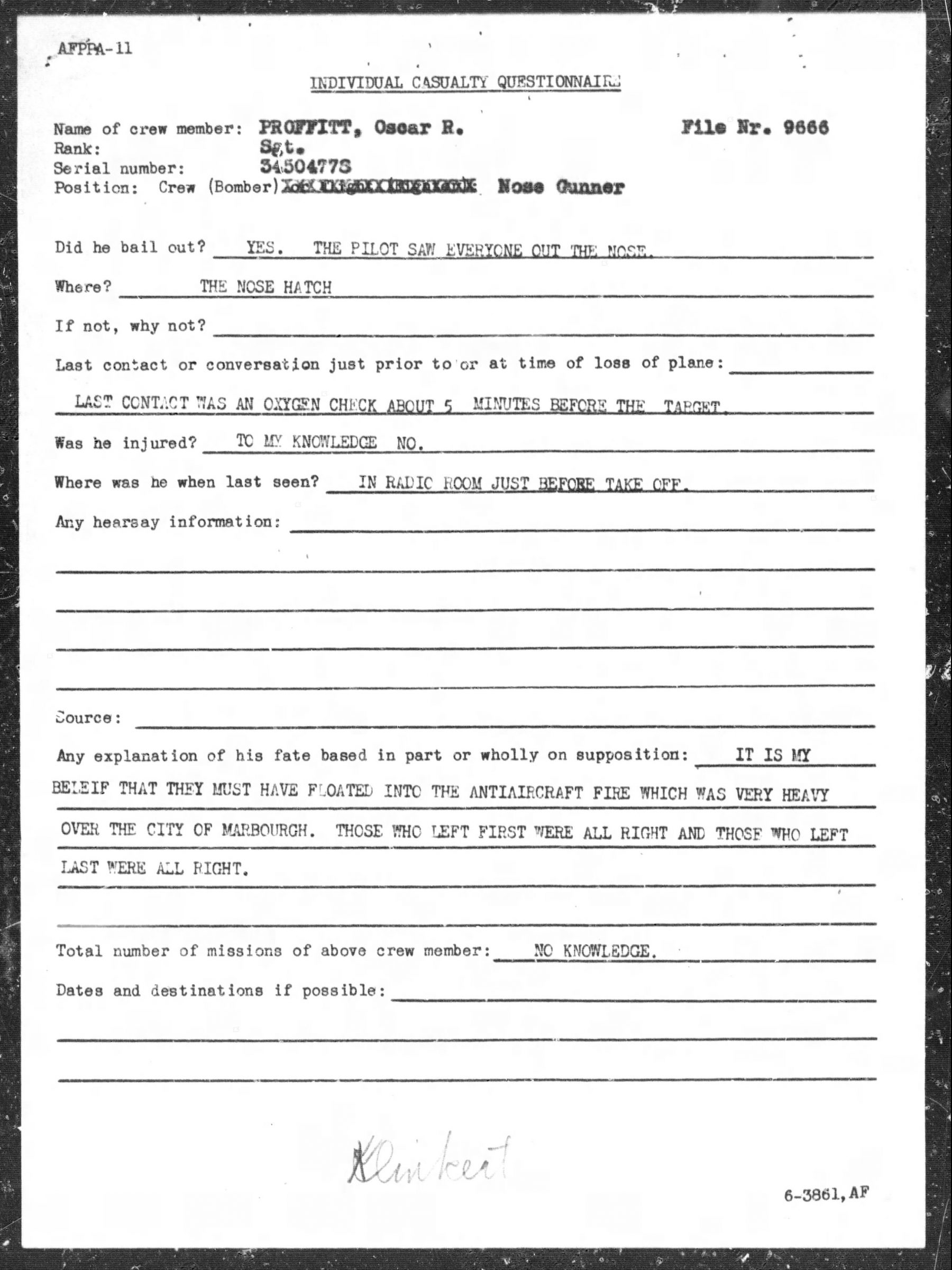 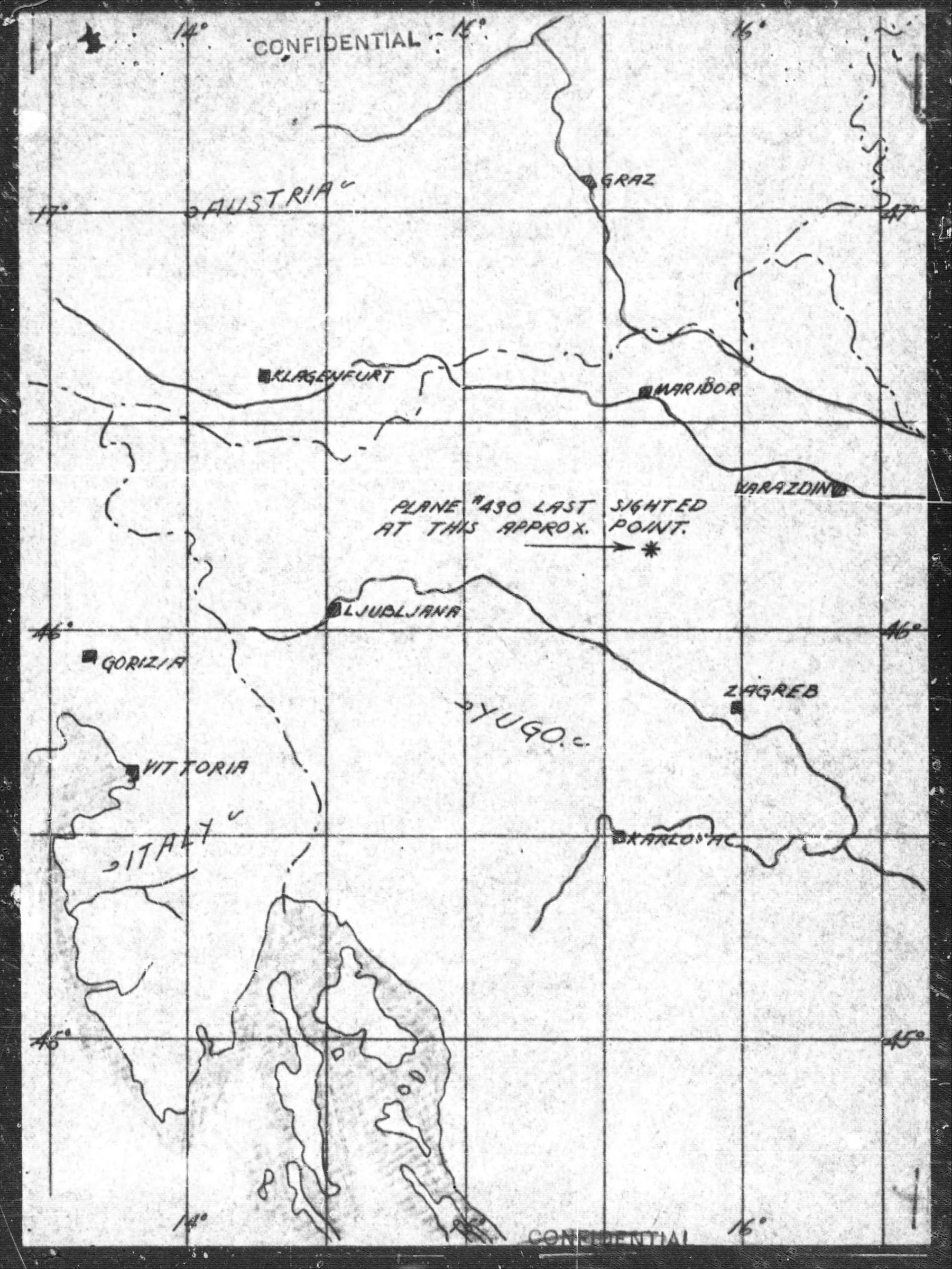 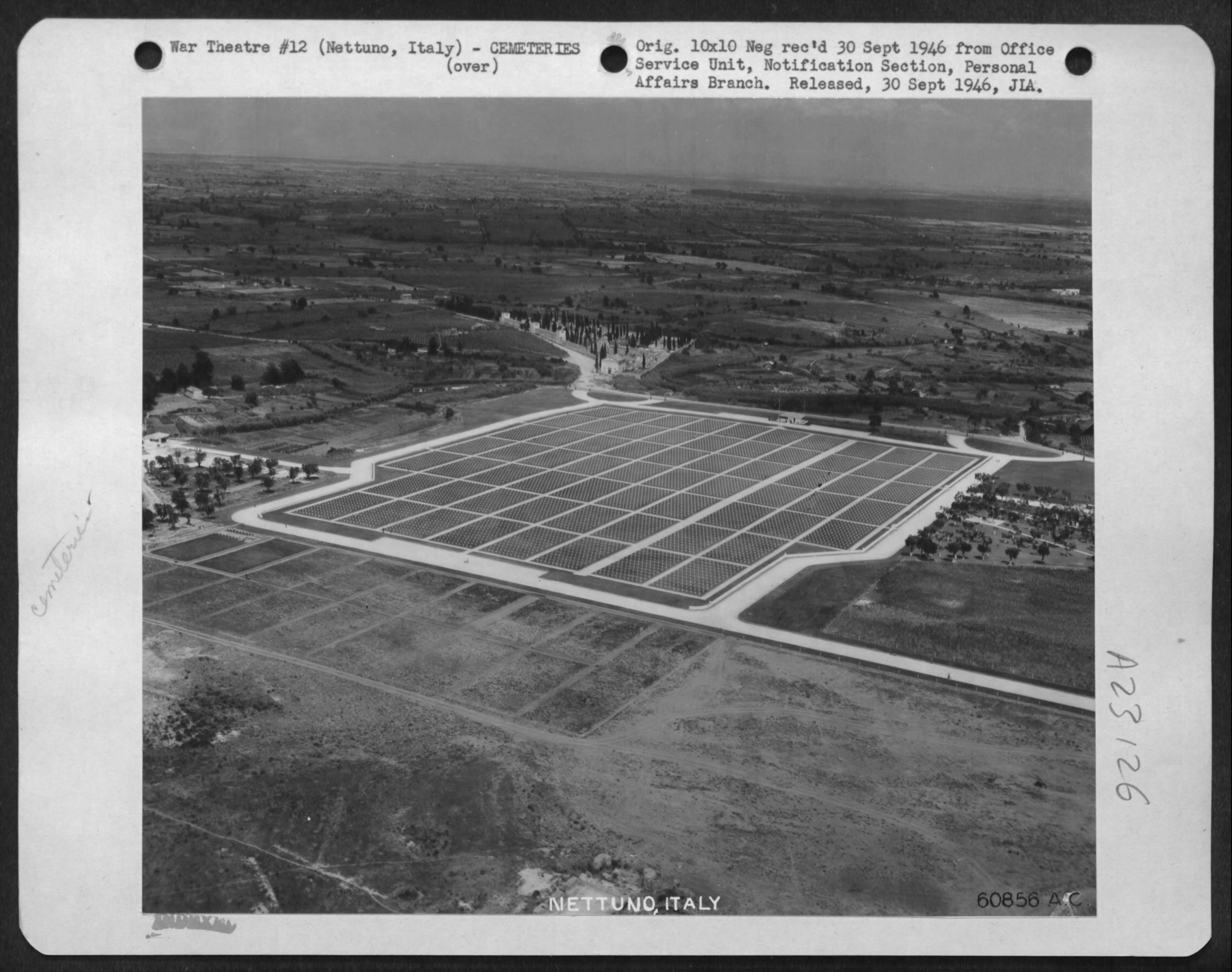