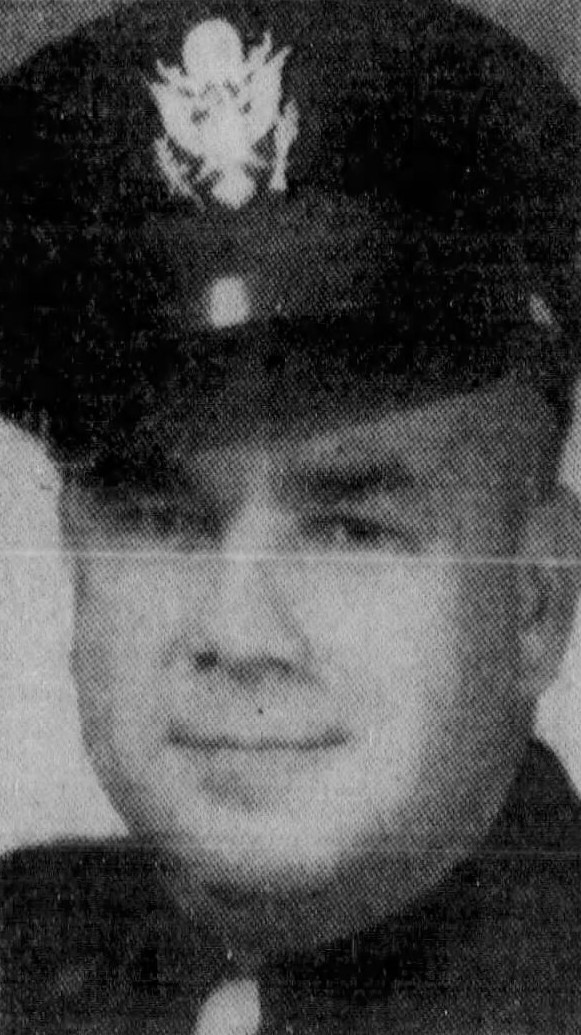 The Knoxville News-Sentinel, August 18, 1943
Oscar Handly Jr., son of the late Knoxville department store executive and Mrs. Handly, died Aug. 14 in the South Pacific where he was stationed with the Glider Corps. News of the death of Mr. Handly, a flight officer, was received yesterday from the War Department by his wife in Chattanooga, where he was manager of Miller Brothers Co. department store until entering service 18 months ago. The wire to the flier’s wife gave no details, simply reporting that he died on Aug. 14 and that a letter would follow. The late Oscar Handly Sr., secretary of Miller’s store here, died last December. The mothere, and a sister, Miss Gertrude Handly, were visiting in Fort Lauderdale, Fla., when news of the flight officer’s death was received here. He was a graduate of Sewanee Military Academy and of Dartmouth College. In February of this year he was graduated among a class of airmen trained in cargo and troop-carrying glider planes at Lubbock Field, Tex.
Surviving are the widow, Mrs. Laura Hutcheson Handly; one daughter, Laura Franklin Handly; the mother, Mrs. Oscar Handly Sr.; one brother, Gustave Handly, vice president and secretary of Miller’s; three sisters, Mrs. Tom Pace Jr., Miss Gertrude Handly, all of Knoxville, and Mrs. Shirley Spence of Louisville, Tenn., and grandmother, Mrs. G.H. Miller, of Chattanooga.

The Knoxville Journal, August 19, 1943
Flight Officer Oscar Handley Jr., 35-year-od son of the late Oscar Handly and Mrs. Handly, was killed in the South Pacific August 14, according to a message received by his wife in Chattanooga yesterday. No details of how Mr. Handly met his death were given in the War Department announcement. Handly, a member of the Glider Corps, voluntered for foreign service 18 months ago and left his position as manager of Miller Brothers Co., Chattanooga department store.
His father, the late Oscar Handly Sr., secretary and one of the principal owners of Miller, Inc., of Knoxville, died last December. Flight Officer handly was graduated from the University of the Southat Sewanee and attended Dartmouth College. He went to Chattanooga shortly after attending Dartmouth, where he went into business with an uncle, Felix Miller, at the family department store there. Mrs. Handly, mother of the officer, and a sister, Miss Gertrude Handly were in Ft. Lauderdale, Fla., when the news of the death was announced. Survivors include the widow, Mrs. Laura Hutcheson Handly; one daughter, Laura Franklin, six years of age, of Chattanooga, mother Mrs. Oscar Handly Sr.; one brother, Gustave Handly, vice-president and secretary of Miller’s Inc., Miss Gertrude Handly, all of Knoxville, and Mrs. Shirley Spence of Louisville, Tenn., and grandmother, Mrs. G.H. Miller of Chattanooga. 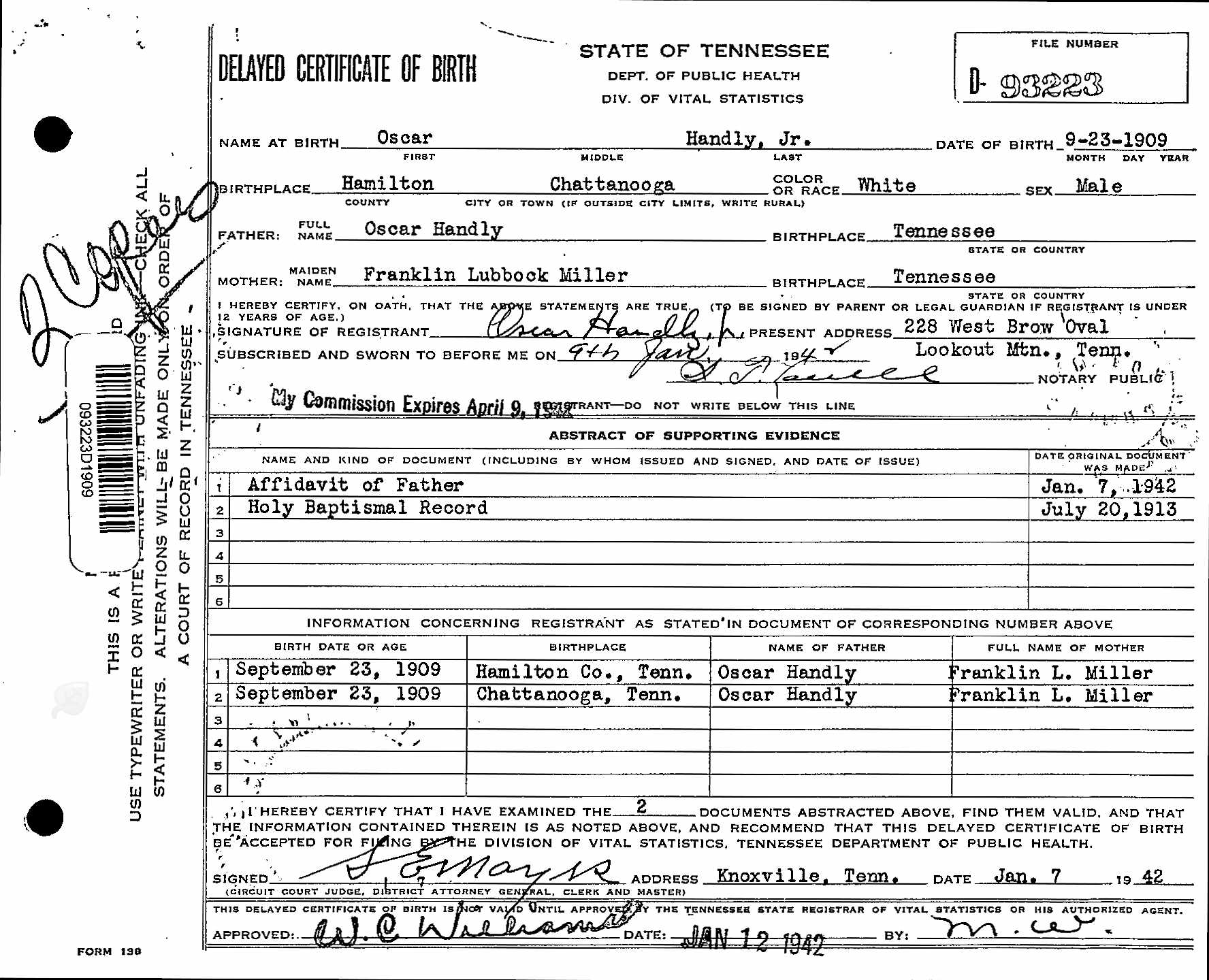 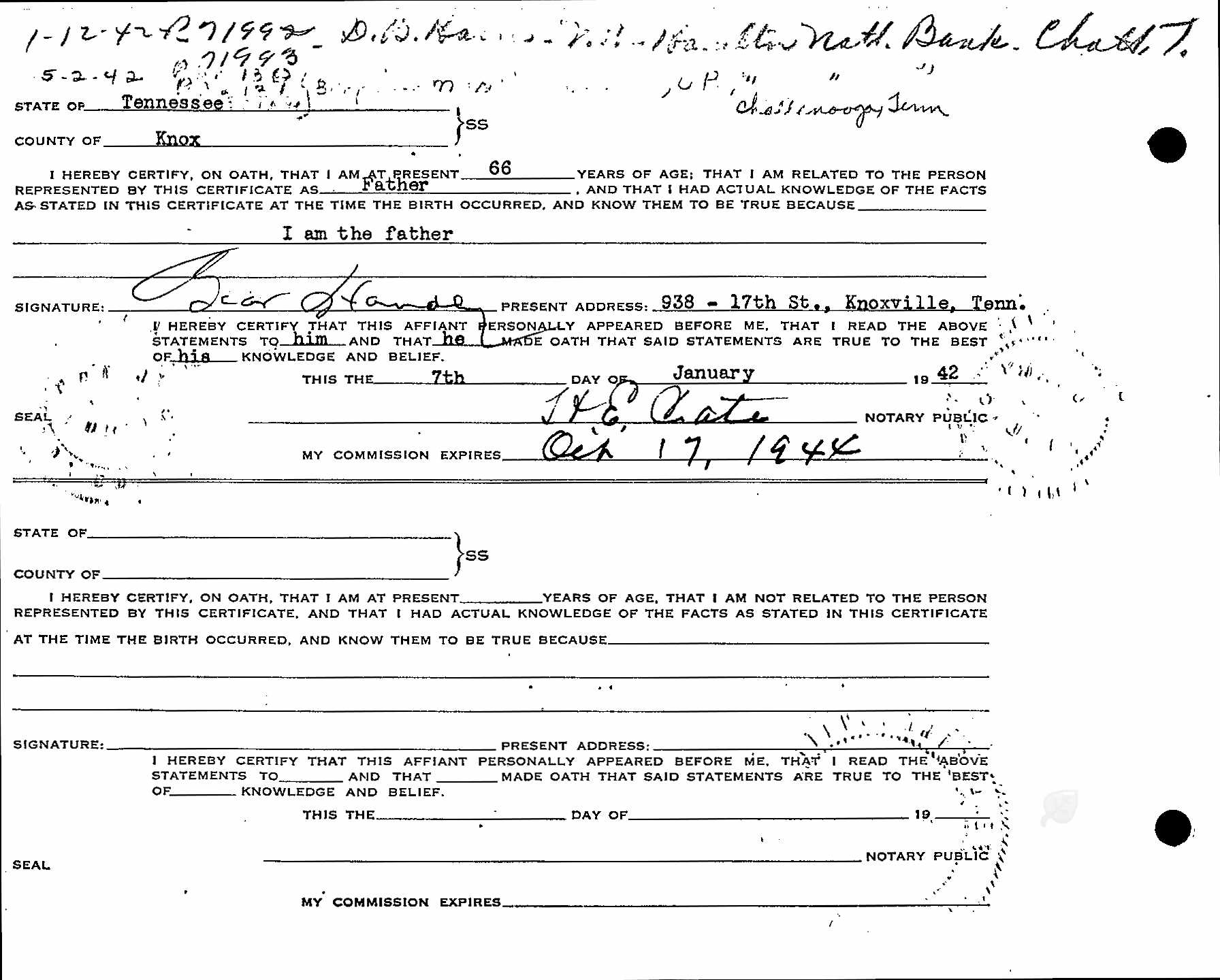 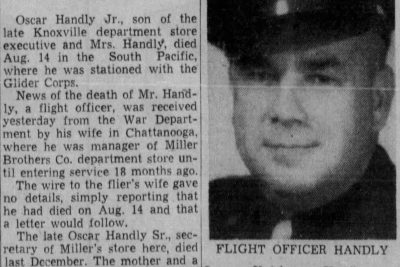