Obey L. Allen was born 8 September 1895 at Birch Cross Roads, Tennessee, possibly Bird Crossroad. First name alternate spelling: Oby. He was the son of Moses and Amanda Allen. He entered the service September 5, 1918 in Newport, Tennessee. He sailed to Europe September 15, 1918, arriving October 13. When he arrived in Brest, France he was very ill and died the same day of broncho pneumonia. He was initially buried at Brest, France. His body was brought to Newport in 1921.  Pvt Allen is buried at Union Cemetery, Newport, Cocke County, Tennesse. 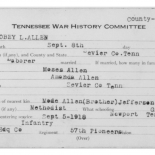 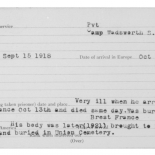 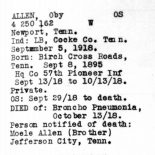