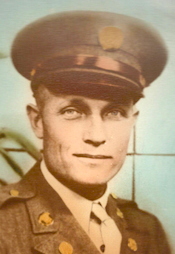 Niles was born on 1 November 1908 in Jonesborough, Washington County, Tennessee. He enlisted in the United States Army in 1926 at the age of 17. Niles served three enlistments for a total of 12 years prior to his honorable discharge. His tours of duty included the United States, Territory of Hawaii and Panama mostly with the Headquarters Company, 19th Infantry Regiment. Upon his discharge on 23 January 1939, Niles entered the Army Reserves and returned home to work on his father’s farm.

Niles was recalled to active service on 10 February 1941 and assigned to the Headquarters & Service Company, 85th Engineer Battalion. He was later reassigned in early January 1943 to Company C, 82nd Engineer Regiment at Camp Swift near Bastrop, Texas. Their training began on 2 February and on 29 March the 82nd was redesignated the 82nd Engineer Combat Battalion and attached to the 1115th Engineer Combat Group, VIII Corps for training. Basic training was completed on 22 May 1943 and Unit training began on 24 May. This training would stress working together as a unit to execute and accomplish daily engineer missions and was completed on 14 August.

Niles participated in the Louisiana Maneuvers near Many, Sabine Parish, Louisiana on 23 August 1943 until 15 September when they redeployed back to Camp Swift. They were now assigned to III Armored Corps and began training on minefields and the construction of floating (pontoon) bridges. On 29 September, Niles and the 82nd received Movement Order #6991-G to be ready to deploy overseas by 1 November. All their equipment moved to the Port of Los Angeles, California on 25 October and sailed on 3 November with one Officer and one NCO as escort. Niles and the rest of 82nd proceeded by train to Camp Patrick Henry in Newport News, Virginia and arrived on 16 November. On the 20th they moved to Hampton Roads, Virginia and boarded two Liberty Ships. Niles along with Company B and C boarded the SS Conrad Weiser (Hull #990) and the rest of the battalion onto SS John Banvard (Hull #962) and departed for Oran, Algeria, North Africa on 25 November and arrived there on 2 December 1943. The 82nd was sent to a tent camp about eight miles east of Oran. Very little training was accomplished due to the fact they didn’t have any of their equipment and it was rainy and very cold. So, they mainly did housekeeping duties in attempts to stay dry and warm and awaited their next orders.

Those orders came on 5 January 1944 when Niles and the entire 82nd were alerted that they were being shipped to England. They moved to Camp Don B. Passage near Casablanca, French Morocco. Afterwards they boarded the HMS Andes, a British Troop Carrier and departed for the United Kingdom on 12 January. They arrived Liverpool, England on 20 January and were split into two groups. Niles along with the Headquarters Company and Company C took a train to Frome, Somerset, England and Company A and B a train to Tidworth Barracks in Tidworth, Wiltshire, England where training continued. 22 January again saw the 82nd attached to the 1115th Engineer Combat Group and relieved from them on 8 February and assigned to the XIX Corps. The XIX Corps promptly attached them back to the 1115th. 12 February 1944 saw the rejoining of the entire 82nd at Frome. Their first anniversary as a unit came on 29 March and the 82nd held a formal parade and review at Frome’s Central Park in front of the Mayor and other dignitaries both civilian and military.

2 April found the 82nd on the move again, this time to a Tent Camp at Longbridge Deverill, Wiltshire for more training and then onto Hindon, Wiltshire on 22 May to prepare for the invasion of France and Fortress Europe.

The 82nd moved in three echelons to France. The first echelon with Niles and the bulk of the 82nd moved to Hursley, Hampshire on 13 June 1944 and on the 17th boarded Liberty Ship SS J.D. Ross (Hull #2049) and departed for Omaha Beach. They arrived at 1800 hours (6pm), but stayed on the ship until 25 June. The second echelon departed on 19 Jun from Southampton, Hampshire on a Landing Ship Tank (LST) and off loaded some men, but mostly equipment onto Omaha Beach on 24 June. They proceeded to Govin, France and secured a bivouac area for the rest of the battalion. The next day Niles and the first echelon joined them at Govin. 28 June, they were placed in close support of the 3rd Armored Division that was engaged in reducing the Villiers Fossard Salient. This action was unsuccessful and after two days the battalion returned back to Govin. The third echelon moved to Weymouth, Dorset on 2 July and boarded another LST, they off loaded at Omaha Beach the next day with the remaining men and equipment.

Our Independence Day of July 4th, 1944 saw the 82nd as a whole unit once again at Govin, France and were attached to the 29th Infantry Division relieving the 112th Engineer Combat Battalion and their job began. They started by clearing hedgerows, roadways and minefields, repairing and improving roads and bridges along with other Engineer units. The 82nd Engineer Combat Battalion suffered its first battle casualty on 15 July from Company B.

They were relieved from the 29th Infantry Division on 24 July after the Battle of St. Lo, France and reassigned to support the 35th Infantry Division. The 35th was then to move into St. Lo and relieve the 29th, but first bridges had to be repaired or built and minefields cleared to get them there, so Niles and the 82nd sprang into action to do just that across the Vire River. On 28 July 1944 at 0120 hours (1:20am), Niles and Company C left their bivouac area to sweep and clear the access road to and from a bridge site. While on this task they were attacked by German aircraft and didn’t arrive St. Lo until 0330 hours (3:30am). Niles didn’t make it to St. Lo this day; he was killed in action by those attacking aircraft. He was 35 years old and participated in two Unit Campaigns: Normandy and Northern France. Niles was awarded the Purple Heart Medal and is interred in the Cherokee Baptist Community Church Cemetery, Section A, Row 26, Grave 14 in Jonesborough, Tennessee.

Niles was the son of William R. Vaughn and Margaret “Maggie” F. Bailey. William died just 10 days prior to Niles on 18 July 1944. Niles’ brother Howard served in the Pacific with the United States Army during World War II. 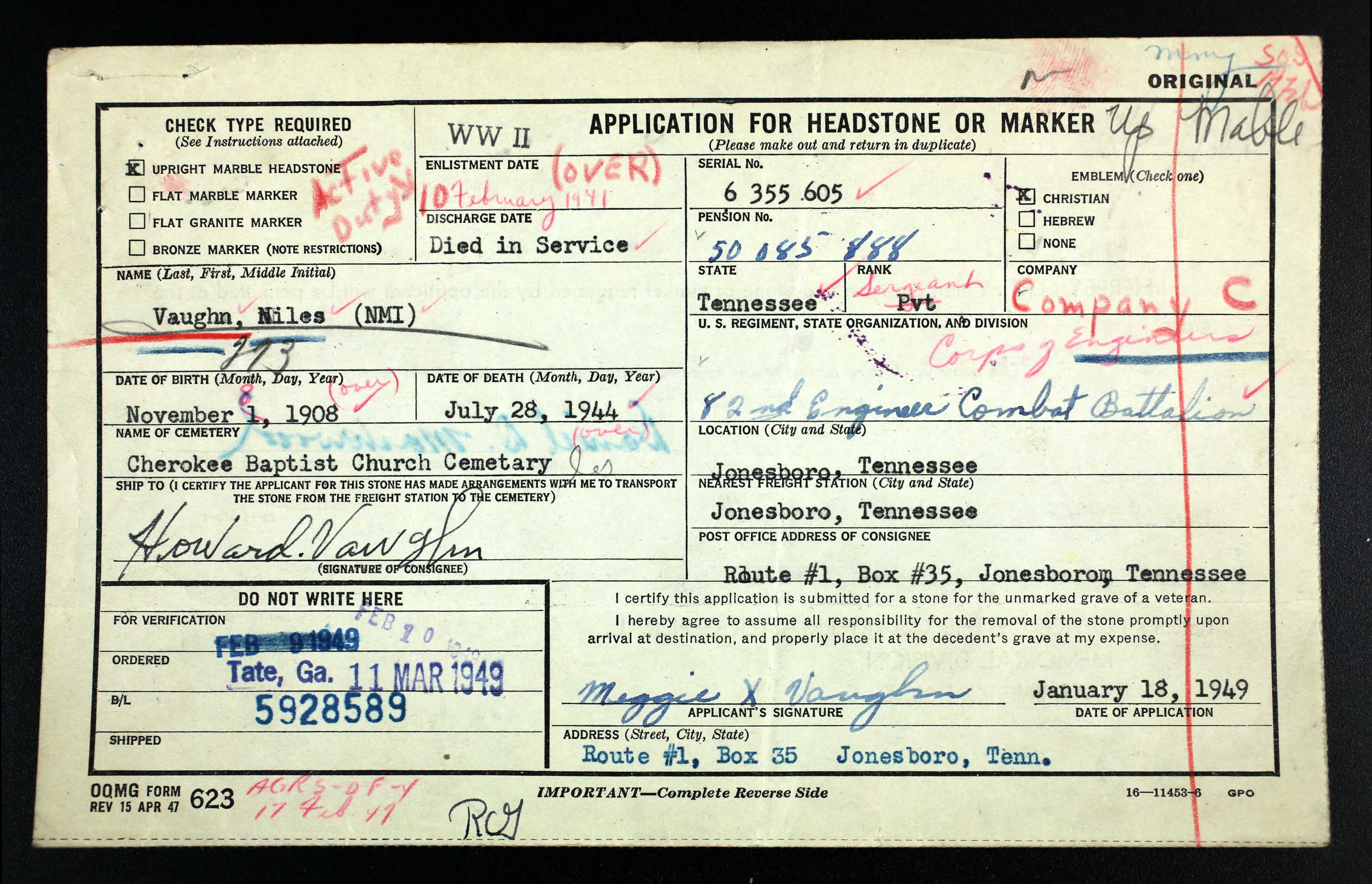 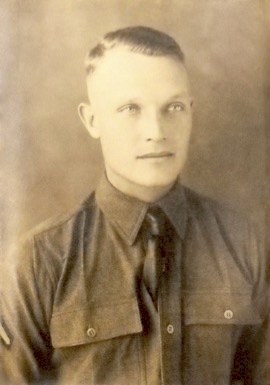 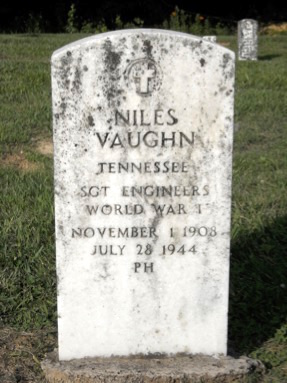