Neal Junior Trotter served on the U.S.S. Hammann (DD412).
On 4 June 1942 the Hammann was operating with Task Force 17 about 120 miles northeast of Midway Island. The final action of the Hamman occurred at about 1530 on June 6, 1942. The Hammann was moored portside to the Yorktown. At this time four torpedoes were reported on the starboard beam. The ship sank so quickly that there was little opportunity for direction or supervision by officers in the process of abandoning ship. 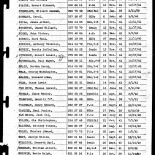