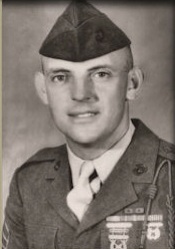 Staff Sergeant Moses Clark Tabor was born on April 10, 1934, and was originally from Crossville, Tennessee. He served his country in the Vietnam War in the United States Marine Corps, as an infantry unit leader in D Company, 1st Battalion, 3rd Marines, 3rd Marine Division. He was a sixteen-year veteran of the Marines when his tour began in Vietnam. On November 22, 1965, SSgt. Tabor was killed in a vehicle crash in Quang Nam province, South Vietnam; he was 31 years old at the time of his death. SSgt. Tabor is memorialized on the Vietnam Veterans Memorial on Panel 3E, Line 108.