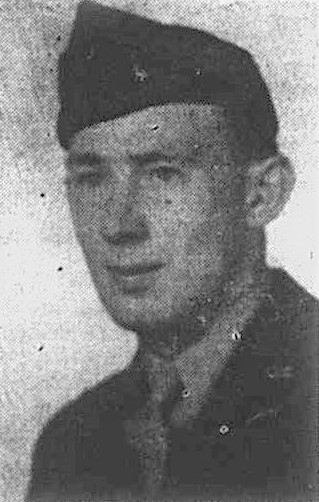 Scott County news, July 13, 1945
First Lieutenant Miljard Crross lost his life in northern Italy in fighting for his country. Lt. Cross was the son of Mr. and Mrs. M. Cross of Route 1, Oneida, and had been in the service for approximately three years. Lt. Cross, who was formerly a teacher in the schools of the county, leaves a wife, Mrs. Edna Posey Cross. We publish a letter received by his wife from the Chaplain of the 361st Infantry, APO 91, care Postmaster, New York.
My Dear Mrs. Cross,
By this time you have received the offical War Department notification that your husband, First Lieutenant Milalrd Cross, O1311123, was killed in action in Northern Italy on April 17, 1945. This word must have been a severe shock to you, and we, his comrades, want to express these words of sympathy. Perhaps a brief account of the circumstances surrounding his death may be of some comfort to you. On Arpil 17th your husband was with Company K, 361st Infantry which was part of the Fifth Army attacking heavily fortified German positions on the front in Northern Italy. The company’s mission was to advance to high ground about 500 yards to its front. Miljard was leading his platoon forward up steep rugged terrain. While he was advancing he was severely wounde by an enemy rifleman. He passed away shortly after while he was being carried to the Battalion Aid Station. His body was laid to rest in a United States Military cemetery in Northern Italy. A funeral service was conducted at his grave by a Protestant Chaplain. More definite information regarding place of burial will be sent to you by the War Department when security reasons permit. Any words of sympathy we might express seem feeble at this your hour of separation, God alone can give that peace which passes all human understanding. Perhaps there is a additional comfort to you to know that your husband was a fine leader of men and one held in high esteem by all of us who had come to know him. He never failed to complete a task at hand no matter how difficult it might be. As a result of such heroic and unselfish action our Regiment was able to capture this high ground and move on against the enemy. Your husband died in pursuit of his sacred duty, giving his life that other might live free from tyranny and oppression. Recall those beautiful words of Holy Scripture, “Greater love hath no man than this, that a man lay down his life for his friends.” May God’s blessing be upon you. Sincerely, Dean T. Stevenson, Chaplain (Capt.) 361st In. 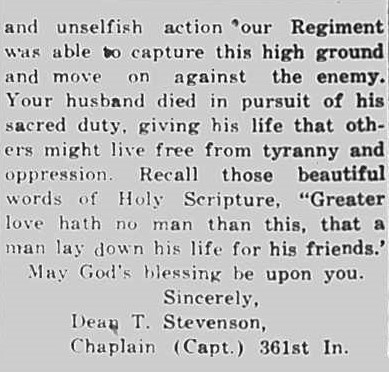