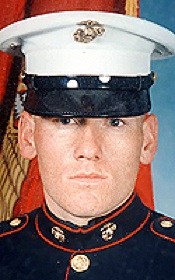 Cpl. Michael R. Speer of Davenport, Iowa grew up in southeast Kansas, in Redfield, a small town with a population of 140 people. He graduated from Uniontown High School in 1997 where he was a member of the football team. He wasn’t one of the loud kids, but that didn’t keep him from being a leader. Soon after he moved to Davenport, Iowa, where he entered the Marine Corps in January 2001. Michael planned to leave the service and spend more time with his new wife, Eliza. They married on August 16th and he planned to leave the Marines in January to start a family and buy a house. The couple had yet to celebrate his first marriage anniversary. Michael was a great storyteller and had a way of telling them that made them come to life. And he was a strong man who didn’t fold in the face of adversity. He never showed weakness in front of his Marines and many believe it’s because he didn’t have any. Speer was the first person from the area to be killed in the Iraq war. Michael was killed at age 24 by hostile fire in Anbar province, Iraq while on his second tour of duty in Iraq. 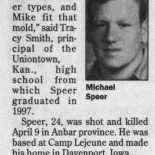 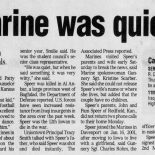