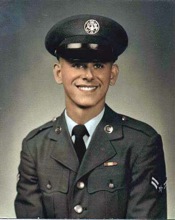 “Our crew consisted of Lt George M. Wall Pilot, Lt Nasipak co-pilot Capt Carl Lemon Navigator, SSgt Edward J. Mosely Flight Engineer all with 362nd TEWS and Ron Lawlor was our 203, Phil was in charge of the back end crew consisting of SSGT Michael R. Conner and myself.

Mike and I were in charge of scheduling and we were really excited about flying together and we had made it a point to hand pick this crew to fly with.

Mike had just recovered from a broken finger and I had just come off DNIF due to hernia surgery. Speaking of that, about 6 hours after I had surgery they had a rocket attack near the hospital in Siagon where I went to be cut on and I had to climb under the bed. OOOOHHHH the gas had worn off too fast and that tile floor was cold.. As with most rockets, they landed and didn’t go off and they weren’t even close to the hospital.

We took off after our normal routine, and flew an uneventful mission. I think we took off about 3:30 AM with a 6 hr mission. It was the kind that you knew who you were after and where he was supposed to be, but he just didn’t come up. We joked back and forth saying he knew WHO was up here and he was afraid to come up with all the EXPERTS up here ready to copy.

About 10 minutes B4 time to RTB he came up and we asked the AC for permission to stay on site to get him. Permission, so we dug in and did our thing. Capt Lemon got on him and directed the plane into position, I think we had a fix on him when KABOOM. Reports say we got hit with 37MM but I looked down and saw at least a 4 inch hole right next to the Doppler set. Capt Lemon was the only one hit.. I think a piece of shrapnel went through close to his elbow– not too much blood and he did an excellent job. He hung right there and between him and Phil, they got out the MAYDAY and gave our exact position.

Rescue was johnny on the spot and other than me trying to clean my pants I think everyone did a fine professional job. Our first intent was to get to sea because the damage was to the rear end control and the front end crew didn’t have alot of options.

We lost one engine immediately and the other one was smoking pretty bad, so going over the mountains was out. Next I think they tried for a landing strip, but rescue said it was VC controlled.

Next option was to bail out so Mike and I went to the jump door and tried to open it.. Jammed due to the concussion. We tried and tried and finally the door just fell off!!!!!! We looked at each other and both agreed we were way too low to jump, and about that time Lt Wall looked back at us expecting the back end to be clean and ordered us to strap in and prepare for crash landing.

As we went forward, Mike was ahead of me and he automatically went to my seat so I took his rear seat. I had just buckled in and looked out the left window to see the wing hit a tree and break loose.

I honestly don’t know if I was knocked out or not, I did realize that something very heavy was on me when I tried to move, one of the consoles had broken loose and had landed on me. As I got free , I started hearing moans and groans so I knew someone else had made it also.

As we slowly started to unpile each other I discovered my good friend Mike, who had gone forward and had taken my seat was killed. To this day I still ask GOD why. This man was married and all he could do is talk about his wife and the baby they were about to have.

Upon reaching the hospital I learned that Capt Wall has also been killed in the crash. Ron , Phil and Capt Lemon were all accounted for and visually seen. I never saw Lt Nasipak or SSGT Mosely.

After returning to base and starting to work we learned that Mike’s widow had given birth to a son one month to the day after the crash. Mike Jr. was born 22 May 1970. WE took up a collection and started a college fund for him, and I must say 63 guys gave til it hurt. I’M so proud of them.

Upon returning stateside Phil and I and Alan Brack and his wife went to Tennessee to visit the widow and son who never got to see DADDY. Mike’s parents and his widows parents also attended. I do not use their names only for their privacy.

25 years later we all went to THE WALL for a gathering. The little baby I held in 70 was now a married man. We went to the wall at exactly at 9:35AM the time of our shoot down. We held each other and cried. After about an hour we started moving towards the Lincoln Memorial, Mike and I were kinda dragging up the rear and we passed a t-shirt stand. A t-shirt with a hologram of a soldier looking out of the wall towards a little 5 year old caught our attention. The shirt said “Here Daddy I Brought you a present.” We both lost it again !!!!

I have never cried as much as I did that vacation.”

“What a great guy my friend Mike was , a funny, happy always a joke and a smile kinda man. I’m thinking of him today, Veterans Day 2014, and it is a sad day indeed. He spent more than one holiday meal with us when my wife came over to Germany and played with my baby daughter that I still remember it like it was yesterday. Life isn’t very fair when the good are taken so early.” –Submitted by Mike Belli