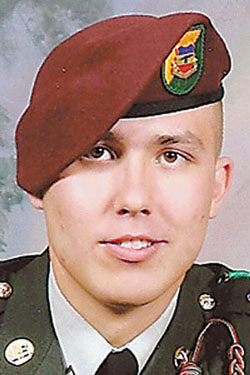 “He always set very high standards for himself, but he was also very shy,” said his father, George. “He never wanted to get out in the limelight. I think Michael would have been very embarrassed to hear his name mentioned by the president.”

The fallen soldier’s name rang out over the radio Saturday when President Bush singled his family and two others out for praise in his weekly address.

“This Christmas, we hold them in our hearts,” the president said. “We lift them up in our prayers. And we are inspired by the example that many of these families have set by turning their grief into extraordinary acts of compassion and love.”

The paratrooper’s letters always mentioned the children of Iraq. After his death, his family looked for a way to help the children he’d written about. The students of Dur-Mandali Primary School for Girls in Balad-Ruz, part of the area Rodriguez patrolled, got that gift last month – donated school supplies for all the children, along with a photo of the fallen soldier.

“I actually have a picture of him there in Balad-Ruz,” said the father, who now lives near Baltimore. “I was using it as the wallpaper on my computer for the longest time. For this to go to an all-girls school was very heart-warming for us, especially after hearing how some of the insurgents have been targeting schools over there.”

Rodriguez’s father and birth mother, Lori Southerland, put together the donations as a way to keep their son’s memory alive. They’ll think of him this Christmas, as well as all the troops still serving overseas and the families waiting for them at home. “That was us last year,” the father said. “We went through it last year with Michael not being here for Christmas, and it was very hard on us.”

The president also praised the work of Bob Lehmiller, who lost a son, Sgt. Mike Lehmiller, in Afghanistan two years ago, and Kirsten Yuhl-Torres, who lost her son, Sgt. Joseph Perry, in Iraq last year. Lehmiller, of Clearfield, Utah, organized Mike’s Guardian Eagle Foundation, which offers financial help to families of the deployed and the fallen. Yuhl-Torres, of San Diego, began sending care packages and letters of support to soldiers she never met. “All these families have already given so much to America, and yet they have found a way to give even more,” Bush said.

The president’s words bring George Rodriguez pride, but they won’t make Christmas easier. “It’s a double-edged sword,” he said. “It’s wonderful for Michael to be honored by the president. But it’s still a holiday, he’s not here, and it’s hard.” The father, a former soldier, said he takes some comfort in knowing that his son’s name will live on in the place where he fought. “I think there’s ways of supporting the process, and not just through the military side,” he said. “There is a human side of this that needs to be addressed, and this was a way to do that.”