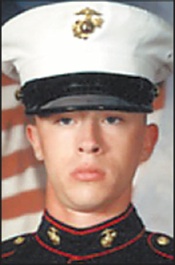 Michael H. Ferschke Jr. was born in Woonsocket, Rhode Island, November 13, 1985, and enlisted in the Marine Corps October 7, 2003, from his hometown of Maryville, TN. Upon completion of recruit training at MCRD Parris Island, SC, Private Ferschke reported to School of Infantry, Camp Lejeune, NC, where he was assigned the primary MOS of 0311, Basic Rifleman.

In March 2005 he was reassigned to 3rd Reconnaissance Battalion, Okinawa, Japan. While there he participated in two rigorous training cycles and deployments with 31st MEU (SCC) as a member of both the Amphibious Reconnaissance and the Deep Reconnaissance Platoons, as well as attending the Marine Combatant Diver Course.

Sgt. Ferschke served in billets as radio operator and assistant team leader before being assigned to his current billet as Team Leader, Team One, 1st Platoon, Company A.

Sgt. Ferschke is survived by his wife Hotaru Ferschke of Okinawa, Japan, and their first child.