Michael Elias Amar was born January 23, 1921. He was the son of Elias M. Amar and Rose Sophia Amar of 615 West 9th Street, Chattanooga, TN. The Amar family emigrated from Turkey in 1901.

Corporal Michael Elias Amar was killed in action on August 16, 1944. He was with the United States Marine Corp, Company H. He was awarded the Silver Star for gallantry in action at Guam, Marianas Islands on July 22-23, 1944 and the Purple Heart. Corporal Amar was repatriated and buried January 25, 1949 at the National Memorial Cemetery of the Pacific, Honolulu, Hawaii. 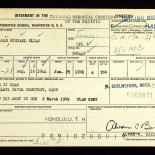 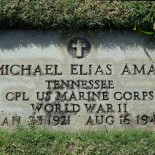