Meredieth Leoda Carter was born on 3 October 1923 to Henderson Carter and Susie Jane Ward. His father died in 1929 and his mother remarried in 1931 with Horance Granville Duncan. He had two half-brothers, Horace Robert Duncan and Lewis Lowe Duncan. Merediet married Nannie Freels in 1943.

Private First Class Meredieth L. Carter worked as a miner before enlisting in the Field Artillery on January 17, 1941 in Fort Bragg, North Carolina. He was killed in action 19 March 1945.

The Knoxville News-Sentinel, 10 February 1944
Mrs. Horace Duncan, of Wind Rock, Tenn., hung two blue Service Stars in her window for her two sons, Pvt. Louis Lowe and Pfc. Meredith L. Cater. Pfc. Carter was at Fort Sill, Okla., at the time. When he was transferred to Camp Jackson his star began changing from blue to silver. He now is overseas, and the star is completely silver. Mrs. Duncan and Pfc. Carter’s wife, Mrs. Nannie Carter are proud of the star and show it to all who come. 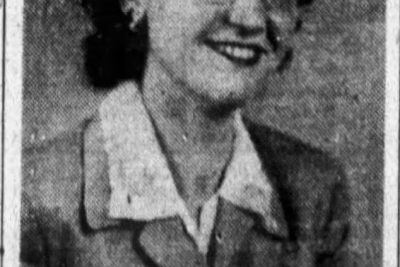 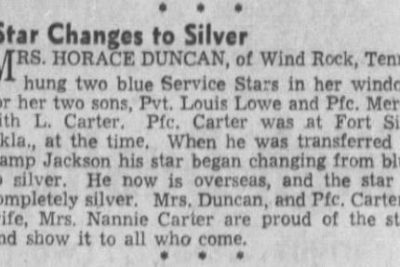