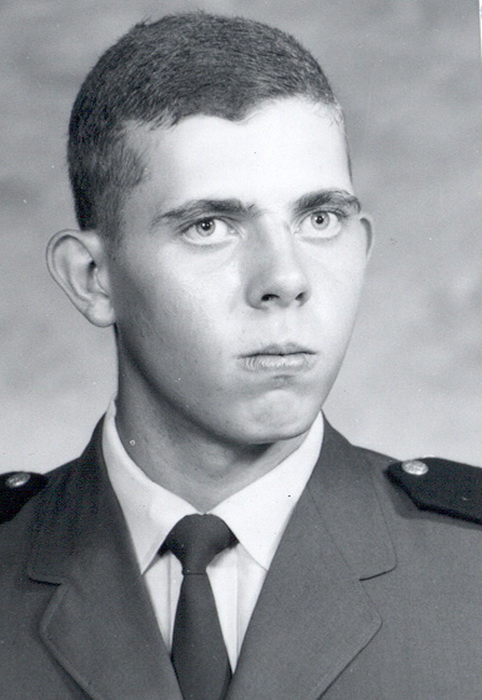 His Memorial Page at the Air Force Academy:

Captain Charles T. McMillan II, was born on 4 October 1951 in Boise, ID. He graduated from Norte Vista High School, Riverside, CA, in 1969. While at the Air Force Academy, Charles was assigned to Cadet Squadron 03 and participated in bowling activities. Captain McMillan received a Bachelor of Science Degree in History and was commissioned a Second Lieutenant on 6 June 1973. He attended Undergraduate Pilot Training in 1973 at Moody AFB and completed Navigator Training at Mather AFB in 1974. Additional assignments included Pope AFB, NC, Rhein Main AB, Germany. His final assignment was with the 8th Special-Operations Squadron, Hurlburt Field, FL, where he served as a MC-130E Instructor Navigator. During his tour of active duty, Charles received the Air Force Commendation Medal, expert Marksmanship Ribbon, Combat Readiness Medal, Longevity Service Medal, National Defense Service Medal, and the Air Force Outstanding Unit Award. He is survived by his wife, Janis Ann, and his parents, Charles and Nora McMillan of Corryton, TN.

The tragic death of one of our Academy and Air Force family brings us immeasurable pain. We pray today for Charles, his Wife, Jan, his family and loved ones. Captain McMillan is interred at the Air Force Academy Cemetery. He is memorialized with a marker in the wall of the Old Knox County Court House.

The Helicopters were to meet up with the transports approximately 100 miles from Tehran and refuel from the transports. Then continue to the next landing site a stadium next to the Embassy and Special Forces troops would storm the compound and make their withdrawal. On the way to Desert one two of the helicopters were lost to mechanical breakdown. The Army decided it did not have enough assets to complete the mission and choose to withdraw. The helicopters were low on fuel and they were being refueled to return to their carrier.

“Fuel consumption calculations showed that the extra 90 minutes idling on the ground had made fuel critical for one of the EC-130s. When it became clear that only six helicopters would arrive at Desert One, Kyle had authorized the EC-130s to transfer 1,000 U.S. gallons from the bladders to their own main fuel tanks, but Republic 4 had already expended all of its bladder fuel refueling three of the helicopters and had none to transfer. To make it to the tanker refueling track without running out of fuel, it had to leave immediately, and was already loaded with part of the Delta team. In addition, RH-53 Bluebeard 4 needed additional fuel, requiring it be moved to the opposite side of the road.

To accomplish both actions, Bluebeard 3 had to be moved from directly behind the EC-130. The aircraft couldn’t be moved by ground taxi and had to be moved by hover taxi (flying a short distance at low speed and altitude).  A USAF Combat Controller attempted to direct the maneuver from in front of the aircraft, but was blasted by desert sand churned up by the rotor. As the Controller attempted to back away, Bluebeard 3‘s pilot perceived he was drifting backward (engulfed in a dust cloud, the pilot only had the Controller as a point of reference) and thus attempted to “correct” this situation by applying forward stick in order to maintain the same distance from the rearward moving marshaller. The RH-53 struck the EC-130’s vertical stabilizer with its main rotor and crashed into the EC-130’s wing root. “

Eight Service Men, 3 Marines and 5 Air Force lost their lives in the crash and fire that followed.