Sergeant Maynard F. Greene #6886743 US Army was assigned to the 31st Infantry Regiment based in the Philippines, prior to the attack and invasion by the Japanese.

The Japanese attack began on the 8th of December 1941, and the 31st fought the Japanese to a stand stiil for approximately 4 months. The Regiment was surrendered on the 9th of April 1942. Of the 1600 soldiers of the 31st, approximately half died in action or in captivity. Maynard Greene was a prisoner of war at PW Camp #4 – O’Donnel Tarlac Luzon Philippines 15-120.

Sergeant Greene died on 29th of May 1942. He is interred at the Manila American Cemetery, L,10,86, Philippines. 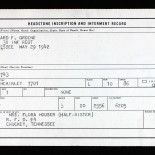