Born 8 August 1927
Sergeant Cole was a member of the 32nd Infantry Regiment, 7th Infantry Division. He was wounded by the enemy in North Korea and returned to duty on November 24, 1952. He was Killed in Action while fighting the enemy on “Pork Chop Hill.”
Buried at Happy Valley Memorial Park, Elizabethton, TN

The Elizabethton Star, July 15, 1953
A Carter County soldier in Korea, Scheduled to return home before the end of the month, was killed in action last week, presumably in the savage fighting on Porkchop Hill. He was Sgt. Mathey G. Cole, 25-year-old son of Mr. and Mrs. C.D. Cole of Route 7, Elizabethton. Sgt. Cole was a member of the 32nd Infantry, 7th Division. The 7th was pulled off of Porkchop last Saturday, in a “command decision” to end bitter hand-to-hand combat that had raged for five previous days.
Sgt. Cole was killed July 8 – last Wednesday – according to a Defense Department telegram addressed to his wife, the former Mahale Tolley of Simerly Creek community. The couple had been married last August; there weren no children.
The infantry sergeant had been twice wounded in Korean fighting since going overseas last September, his family told the STAR today. He had served at overseas stations twice previously, first at Guam shortly after World War II and more recently in Iceland. The Iceland duty was during his service with the local National Guard unit which entered Federal Service in September, 1950. Sgt. Cole later re-enlisted int he regular Army. 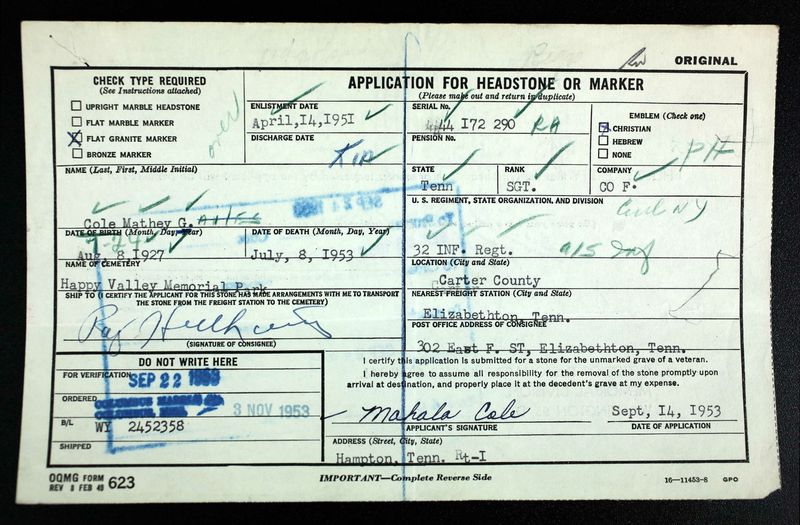 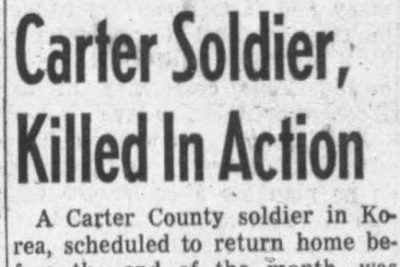