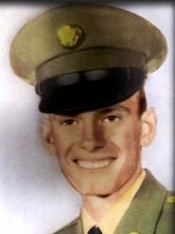 Specialist 4 Lynn C. Hayes was born on August 18, 1947, and was originally from Crossville, Tennessee. He served his country in the Vietnam War in the United States Army, as an infantryman in B Company, 2nd Battalion, 22nd Infantry, 4th Infantry Division. His tour in viet began on November 9, 1966. On May 17, 1967, SP4 Hayes was killed while under hostile conditions from burns sustained during fighting in Binh Duong province, South Vietnam; he was 19 years old at the time of his death. SP4 Hayes is buried at Grassy Cove Methodist Church Cemetery in Cumberland County, Tennessee, and is memorialized on the Vietnam Veterans Memorial on Panel 20E, Line 16.