Robert was born in Johnson City, Washington County, Tennessee on 30 May 1918 to Fred and Edith Elizabeth Hopper Lusk. He moved with his family to Knoxville, Knox County, Tennessee in 1938. Fred was a pipe fitter/plumber and moved there for a better paying position and resided at 113 Silver Place.

Robert enlisted in the United States Marine Corps in Knoxville on 19 June 1941. He completed Basic Training (Boot Camp) at the Marine Corps Recruit Depot, Marine Corps Base (MCB) Parris Island, South Carolina. After boot, he was selected to be a Military Policeman (MP). Upon completing the MP course of instruction, Robert was assigned back to Parris Island to the Military Police Company, Post Troops.

He had just transferred to Marine Corps Air Station New River located in Jacksonville, Onslow County, North Carolina, but hadn’t reported in, so he still belonged to MCB Parris Island. When on 16 January 1943 at around 2345 hours (11:45pm), Robert was walking along a public highway in Jacksonville when he was struck by a passing automobile. The accident fractured his skull and broke his lower left leg. He was taken to the United States Naval Hospital on Camp Lejeune, a Marine Corps Base also located in Jacksonville near New River. Robert was admitted at 0010 hours (12:10 am) on the 17th. He held on for nearly 18 hours before passing away that same day on the 17th at 1750 hours (5:50pm), he never regained consciousness.

Robert was 24 years old and participated in the Defense of the Americas Campaign. His remains were released to his mother on the 18th and she instructed that he be sent to the Appalachian Funeral Home in Johnson City. Robert was interred at 3pm on the 21st at Oak Hill Cemetery in the North Corner Lot #3, now Section L, Row 3, Grave 49 in Johnson City. Reverend William H. Harrison, pastor of Munsey Memorial Methodist Church officiated and full military honors were rendered.

Robert’s father Fred passed away from a heart attack the next year on 18 September 1944. His older brother Clyde Browning Lusk served in the United States Army during World War I in France as a Sergeant with Company F, 117th Infantry Regiment, 30th Division and is interred across from Robert.
–Submitted by Allen D. Jackson, USAF, Ret. 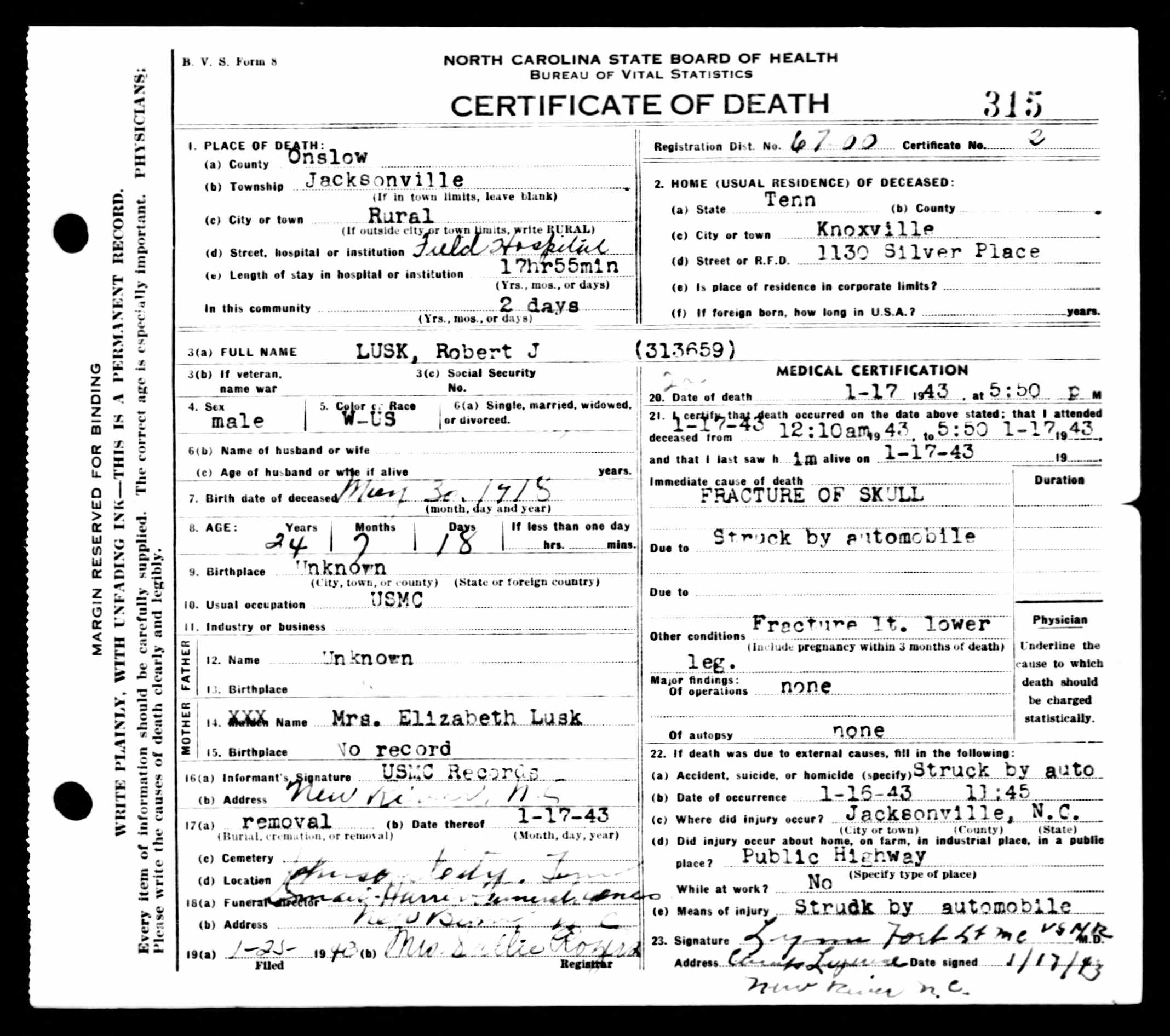 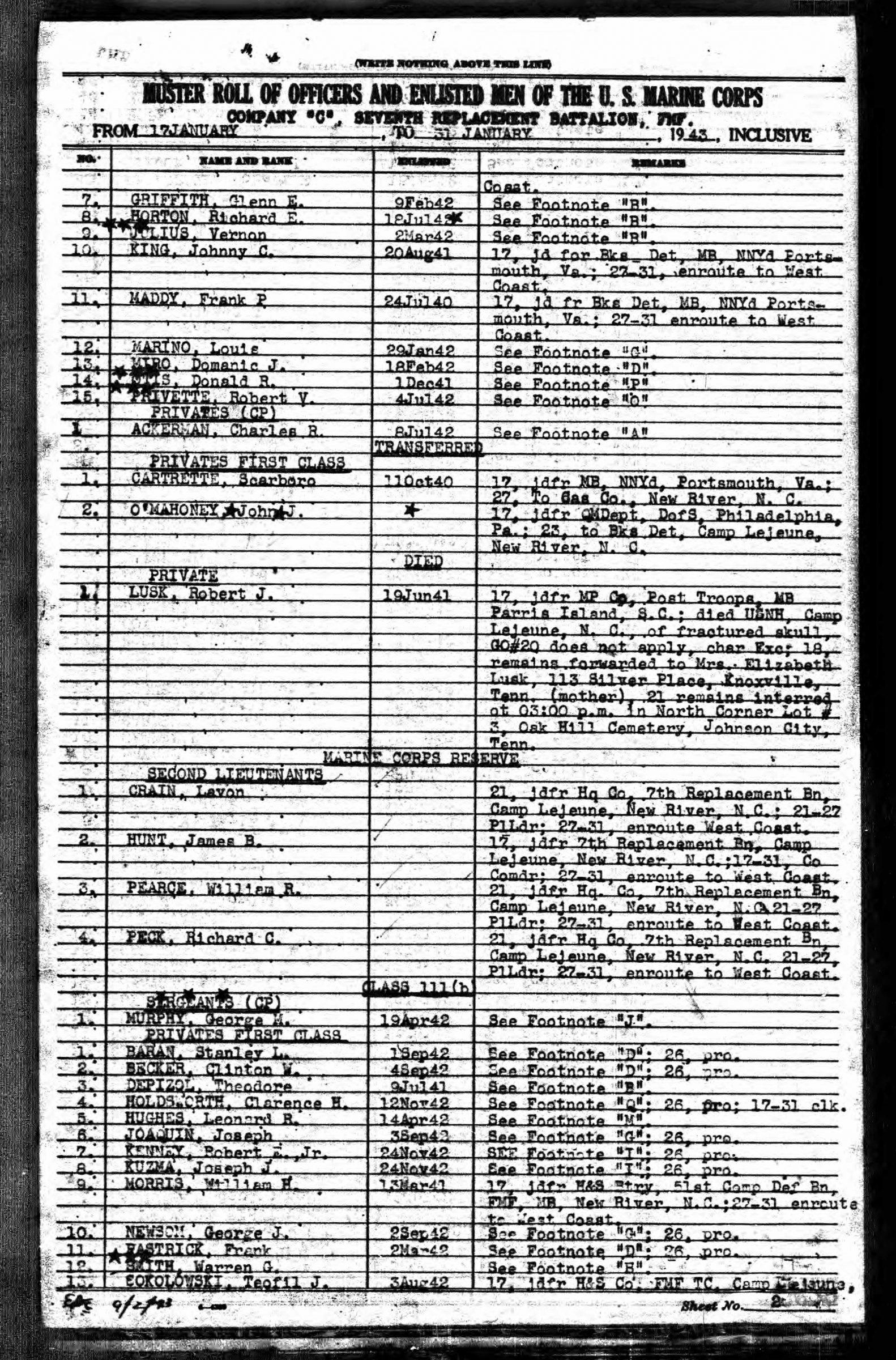 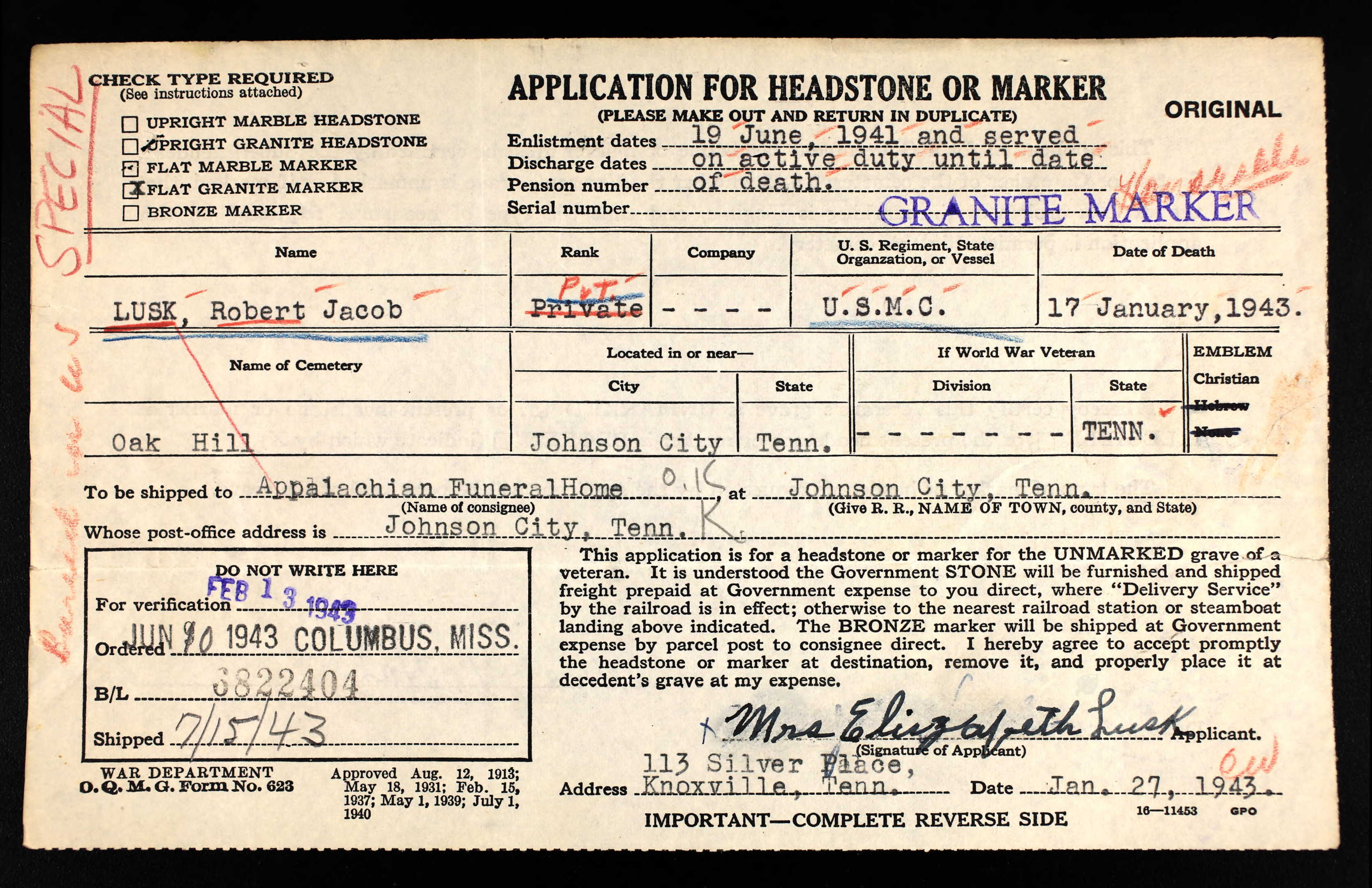