Private Loyd Goins #34377973 US Army was assigned to the 39th Infantry Regiment, 9th Infantry Division. On 30th of July 1943 the 39th Regiment was temporarily placed under the command of the 1st Infantry Division. Both Divisions were engaged in the battle for Siciliy in the central portion at the town of Troina. The Battle of Troina was the first serious reversal suffered by the 39th, as it attempted to clear out heavily entrenched German and Italian troops.

Private Goins was killed in action on 1st of August 1943. He is interred at the Sicily-Rome American Cemetery, D,11,43, Nettuno, Italy. 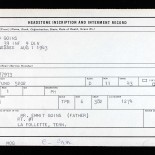