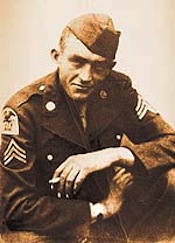 Lloyd Robertson participated in D-Day but was killed soon after on 10 June 1944 near Ste-Marie-Du-Mont, France. He is buried at Red Bank Cemetery, Richardson Cove, Sevier County, Tennessee.

“A Fallen Tennessean” The Knoxville News Sentinel 4th June 2000, by Bryan Mitchell:
Sevierville – Hundreds of miles from the highly traveled President Kennedy Avenue in downtown Paris, French farmers make a daily cruise down a rural road named for a lesser-known American – Lloyd Murphy Robertson Jr. Fifty-six years ago, on June 6, 1944, the Sevier County native was a 24 year old forward observer when Allied forces stormed the beaches of Normandy in the D-Day battle that shifted momentum towards the Allied side during the World War II. Four days later, while patrolling the Utah Beach area with fellow 24 year-old Marion L. Hill Jr. Sgt. Robertson was killed by a German sniper. The road, which runs from Ravenoville to Ravenoville Beach, is named in honor of the fallen Tennessean.
Until recently, however Robertson’s family knew little about his final days. “All we had was sort of a verbal thing, a family story,” said Robertson’s cousin, Vivian Miner. “We didn’t even know what beach he went in on.” All of that changed, though, when more than two years’ worth of research conducted by Miner’s husband, Jim Miner, culminated two weeks ago in a meeting between Hill and Robertson’s family.
For Hill, now a 78 – year old retired train operator, the trip from his Waynesboro, Ga., home was a manifestation of years of desire to meet the family of his fallen comrade. “We have been married for 15 years, and he has always said that he would like to meet Lloyd’s family,” said Hill’s wife, Janice Hill.
For Ralph Robertson, Lloyd’s stepbrother, the meeting was an emotional reminder of tougher times gone by. “We were at an ice cream supper at the local church, and I remember Vivian’s dad came in and we knew something was wrong,” Ralph Robertson said recalling how he heard of his brother’s fate. “After that many years, you don’t expect to hear from anyone. It’s kind of surprising because we really had no information.”
However due to Jim Miner’s tireless hours of research, Lloyd Robertson’s family was able to meet and query the last man to speak with him. Hill, who was awarded the Bronze Star for establishing a line of communication across the Rhine River, spoke candidly with Robertson’s family from the Miner’s home.”
“We were trying to avoid the snipers who were firing at us, but one hit Robertson right between the eyes,” Hill said. “He got hit, so I had to get out of there so he (the sniper) did not hit me.” Hill continued with the tale of the battle’s opening stanza. “They put that (landing craft) pad down, and it was each man for himself,” Hill said. “If you ain’t scared to die, then it’s not scary.”
For Hill, reminiscing in the Miners’ living room as Lloyd Robertson’s family listened intently, the memory of the battle also evoked some laughter. “Teddy Roosevelt Jr. led our division, and we landed two miles north of our destination, and that is when he said, ‘We’ll start the war here,’” Marion hill said with a cackle.
According to Ralph Robertson, Lloyd was in Normandy by choice, as he elected to leave his post training new recruits in New Jersey for the battle.“Basically he made some tough choices,” Ralph Robertson said. “He had the opportunity to stay in America and train soldiers, but he wanted to go over there and join the invasion. He had lots of pride you know – loyalty.”
For Lloyd Robertson’s family the meeting helped shed some light on a half-century’s worth of cloudy details. “It’s really upsetting how little they tell you and how mixed up everything gets afterward.” Vivian Miner said of the family’s inability to receive factual information concerning Lloyd’s death. ”There has been precious little information.” Hill’s visit proved to be a worthwhile experience for Ralph Robertson, who was an adolescent at the time of Lloyd’s death. “I was just 12 years old during D-Day,” he said. “We just never heard too much.” But after Marion Hill made the trip from his Georgia home to Sevierville, many of those blanks became vivid images from an unforgettable experience.
“It was just a war, and I wasn’t over there by myself. I was very fortunate to make it through,” said Hill. Who is the last living forward observe of the 15 he accompanied on the historic raid. “You don’t forget something like this.” Of the 15 members of his unit, only 5 survived the D-Day mission.
Later, Hill was stationed in Belgium, where he fought the Battle of the Bulge. “After the Battle of the Bulge, it was just a rat race,” Hill said with a smile. “(The Germans) were retreating so fast we couldn’t keep up with them.”
The meeting, the first Robertson’s family shared with someone Lloyd knew from the military, came out of Miner’s research on the road bearing Lloyd’s name. “I’m glad I met them. It feels good,” Hill said. I’m glad I got to tell him about Lloyd.”
For Jim Miner, the meeting proved to be a success and yet another reason to pay homage to America’s veterans on the anniversary of the invasion. “It’s a time when we reflect on not only the tremendous sacrifice of those who went in at Utah or Omaha Beach, but of all those who paid the supreme sacrifice in either Europe or the Pacific.”

“One Man’s Research Results in Uncovering Hero’s Story” by Bryan Mitchell, News Sentinel June 4, 2000.
SEVIERVILLE – Every family has its legends. For members of East Tennessee’s Robertson’s family, that legend was of a street in Normandy which they heard carried the name of Lloyd M. Robertson Jr. killed four days after the Allied invasion of Normandy. “The family didn’t have any information except for what was passed down verbally,” Said Robertson’s cousin, Vivian Miner. “We knew he got a Purple Heart, and we were told that there was a street named in his honor somewhere in Normandy.”
But as the years became decades, memories faded and family members passed. “You lose a lot of people, and interest starts to wane,” Miner said. That is, except for Vivian’s husband, Jim Miner. A retired businessman and World War II veteran, Miner first learned of the street bearing Robertson’s name a little over two years ago when he visited Robertson grave site.
“The family was saying that he was a forward observer, but his tombstone said he was in a signal company,” Miner said. “And that didn’t make sense.” So with the tenacity he learned playing football under General Robert Neyland at the University of Tennessee, the knowledge of a fellow veteran and the patience of a concerned family member, Miner began an arduous process of research that came to a zenith two weeks ago when the Robertson family met Marion L. Hill Jr., the last man to see Robertson alive. “It was nice to bring some closure to the family,” Miner said of the family gathering. However the path to the meeting was a long and littered with obstacles.
The first major detour Miner faced was when he learned a military records building in St. Louis had burned in 1973. “The government has been very helpful except that so many records are missing,” Miner said. He then confronted the problem of gathering his research. “All of this stuff is not in one location and all of them tell you to write to someone else,” he explained.
And that is just what Miner did. First to contacts in America and then to unknown sources in France, he just kept on writing. “I wrote letters to just about every mayor in the Normandy area looking for information,” he said. The language barrier proved to be another difficulty until a phone call to the French museum Ste. Marie DuMont turned the legend into fact. A young French woman, Barbey Agnes confirmed the existence of the street named after Vivian’s cousin and then sent the Miner’s a photograph of the plaque honoring Robertson. “Most of the people over there aren’t very helpful, But Barbey was extremely helpful, “Vivian said.
From that point, Jim Miner’s research began to accelerate as specific facts fell into place. The street which runs from Ravenoville Beach and is designated as highway 15 is one of 40 named after Americans who lost their lives during the invasion. “The plaques were constructed in 1948 out of concrete, but they were replaced in 1994 with fiberglass plaques,” Jim Miner said.
The Miner’s still aren’t sure how Robertson was chosen out of the thousands who gave their lives at Normandy, but they feel fortunate nevertheless. “We believe they were chosen at random, but we still aren’t sure,” Vivian Miner said.
And so it is: A family legend transformed to reality through the tireless effort of one man.