The National Cemetery interment card lists Private Lindsey’s date of death as 15 August 1944 and his assignment as Company A, 509th Parachute Infantry. His highest rank held was corporal and his previous units of assignment had been the 502nd and 517th Parachute Infantry. (These re-assignments were common as parachute qualified replacements were shifted amongst units based on need). Private Lewis N. Lindsey was born 4 Jun 1925. Enlisted 25 Feb 41. He died on 15 August 1944 while a member of Company A, 509th Parachute Infantry Battalion, 1st Airborne Task Force while participating in the airborne invasion of Southern France, code named Operation RUGBY. He was buried in the US 17 Dec 1948. -Submitted by Glenn Stover

The Knoxville News-Sentinel, October 22, 1944
Pvt. Lewis N. Lindsey, son of Mrs. L.N. Lindsey, 1816 East Glenwood Avenue, has been reported killed in action, according to the War Department. Previously he had been listed as missing. He had been in service since February, 1941, and overseas a year. Before entering the Army he attended Young High School. 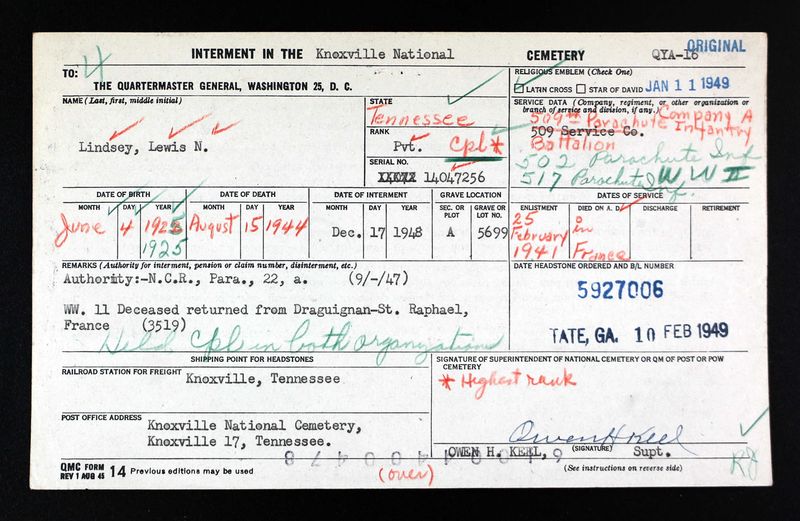 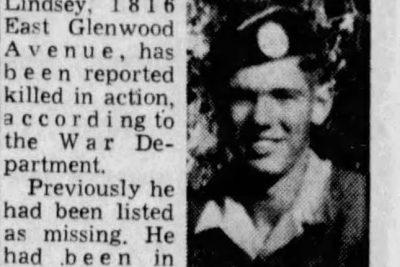