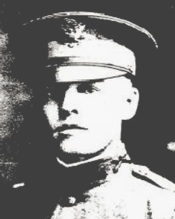 1st Lieutenant Levi Sherman Morehouse was born in 1892 in Fulton, New York. He was assigned to the 117th Infantry Regiment 30th Division AEF. He died on 7 October 1918 and is interred at B,17,14, Somme American Cemetery, Bony, France.

A lady from New York recently visited the Archives. She was passing through Monroe County and noticed a name on our World War I monument on the Courthouse lawn. “Why is my great-uncle’s name on the WWI monument for Monroe County?” she asked. “He was born and raised in New York.”
An investigation revealed that Levi Sherman Morehouse was indeed born and raised in Volney, Oswego County, New York by his parents, Alfred Fremont and Elvira Blakeman Morehouse. Levi lost his mother in 1909 while he was in his fourth year of high school, and entered St. Lawrence University’s School of Agriculture in 1910, graduating in 1912. Three years after his mother’s death Levi’s father married Lena Babcock, who embraced her husband’s children as her own. Lena was a relative of the Babcocks who owned a huge lumber business in the mountainous area of Monroe County, TN during the early 1900s. When Levi’s father died in 1914, Lena’s brother, Clarence Babcock, who lived in Knoxville, TN, and who was also very close to the Morehouse children, asked Levi to come to Tellico Plains, TN and oversee a huge farm that he owned there. Levi consented, and thus became a citizen of Monroe County, TN. He joined the Tennessee National Guard, Company M, 3rd Infantry, and spent some time in Texas. He returned to Monroe County, but at the outbreak of World War I, the 3rd Tennessee Infantry was called into Federal Service in July of 1917. A letter written to his family in New York tells the story of his departure from Tellico Plains:

“Dear Ones at Home
Friday morning, about 1130, the train pulled out of Tellico Plains, bearing her soldier boys away. Everyone in Tellico was at the Station. The mills closed, also the schools, to turn out and pay a last tribute to the youth of Monroe County. The crowd looked almost mute. Good-byes were said very quietly, with little demonstration or sign of emotion, but you could feel it in the air. There were many wet eyes, but the tears were not allowed to flow. Yet everyone was determined that the boys should leave amid cheers and shouts of encouragement. Finally, when all was ready, a great hush fell on the crowds, tense with pent-up emotion. Then as the train slowly moved out, the air was rent with cheers and shouts, hats flew in the air and handkerchiefs floated on the breeze. Thus we left those who will always be dear to the memory of Fighting M Company to wend their way slowly back home, some to break down and weep now that the boys were out of sight, and others to begin the long, long watch for the return of husband, sweetheart, or brother. For life would be barren indeed, were it not for the hope that someday the hero will return.”
St. Lawrence University in the World War, 1917-1918 A Memorial, p. 110.

On May 8th, 1918, Morehouse’s Company set sail overseas, serving in France and Belgium. On October 7th, 1918, Lt. Levi Sherman Morehouse was killed in action at Fraicourt Farm, one mile northeast of Brancourt, France, by a “whiz-bang” or a three-inch shell, which exploded ten feet in front of him.
A letter to Clarence Babcock dated October 15th, 1918, detailed the death of Lt. Morehouse:
“Corporal Hall, whose home is in Madisonville, was the last man in the Company to see Lt. Morehouse alive. He placed this Corporal in a hole for protection and went to have a consultation with some other officers of the 117th Infantry. He did not return … He must have been killed instantly and did not suffer. His body was not mutilated a small piece of shrapnel had pierced his heart.”
Your Friend, R. B. Cable, 1st Sgt. Commanding Company M.
St. Lawrence University in the World War, 1917-1918
He was survived by his sister, Cora Morehouse Wilcox, and a brother, Carl Elihu Morehouse, both of New York.
The book St. Lawrence University in the World War, 1917-1918, A Memorial is available to www.ancestry.com subscribers.
-Submitted by Joy Locke 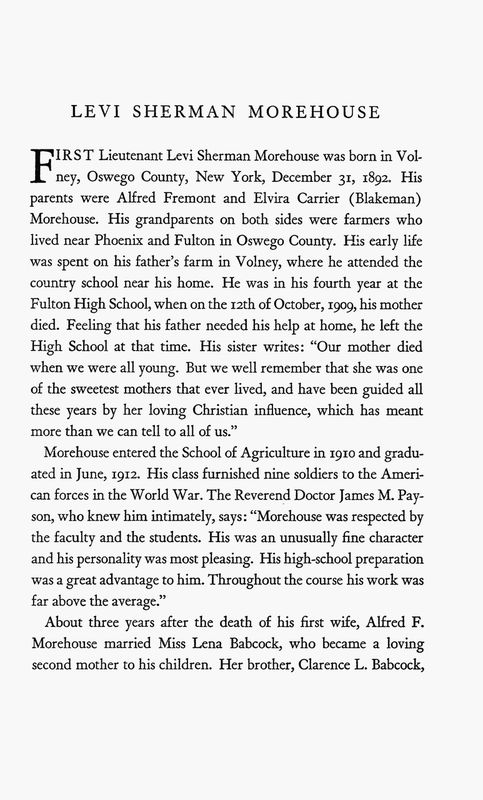 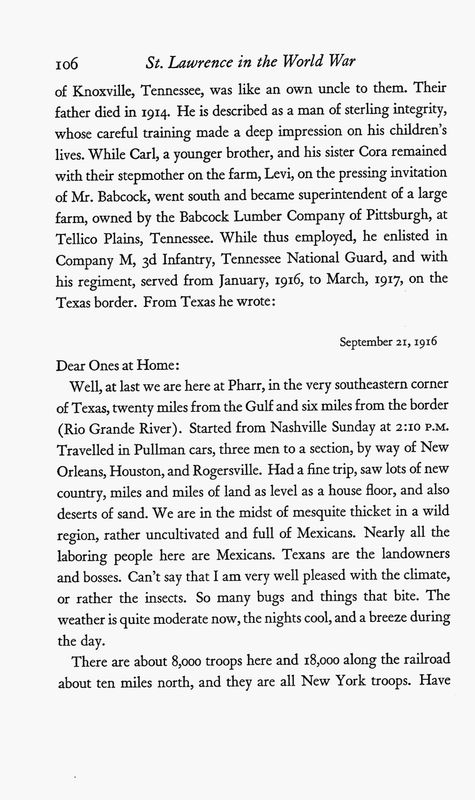 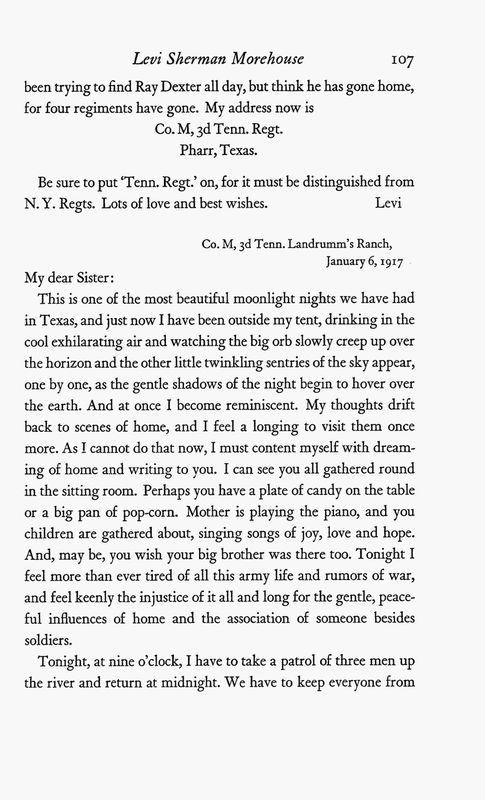 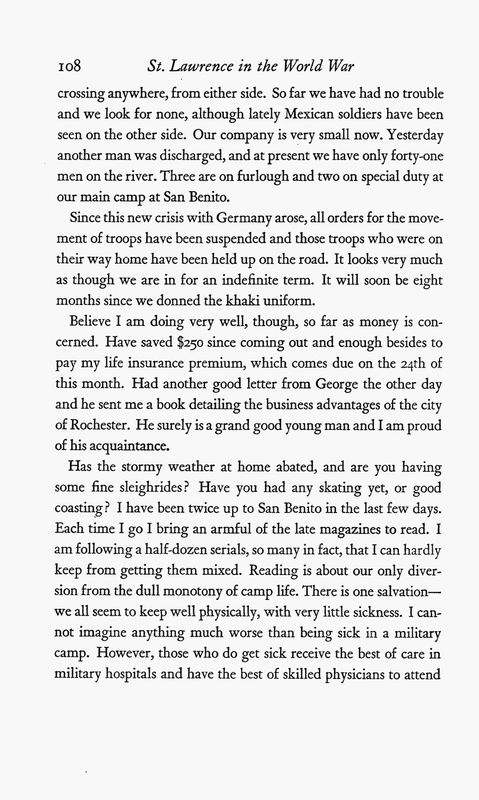 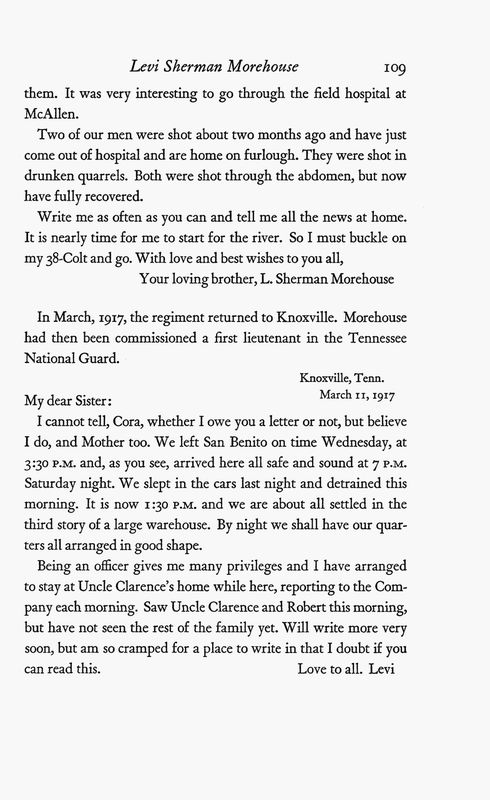 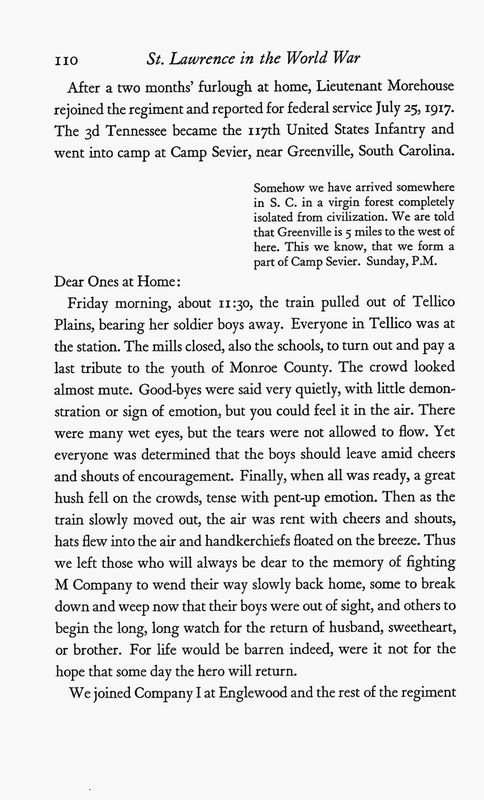 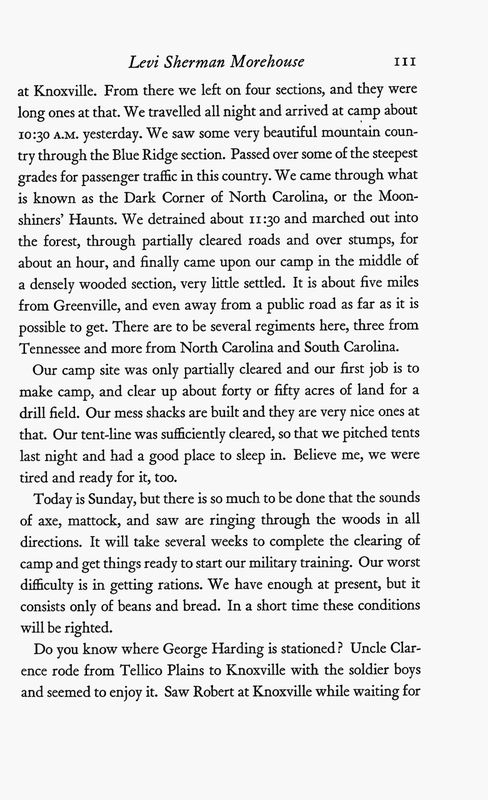 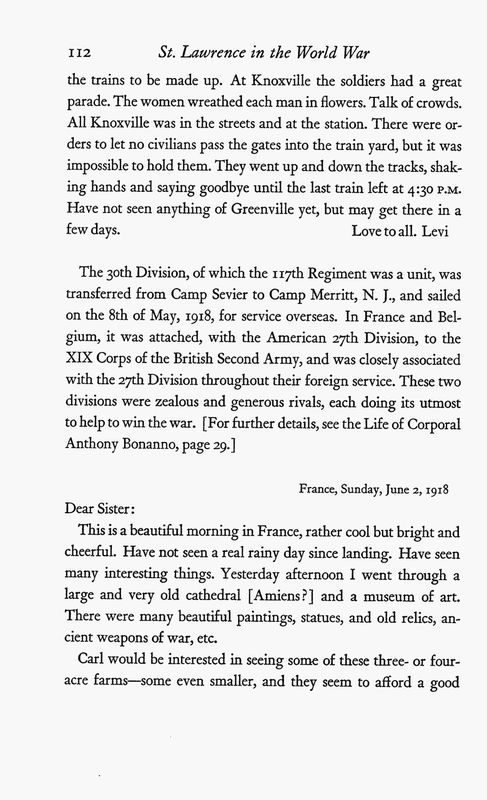 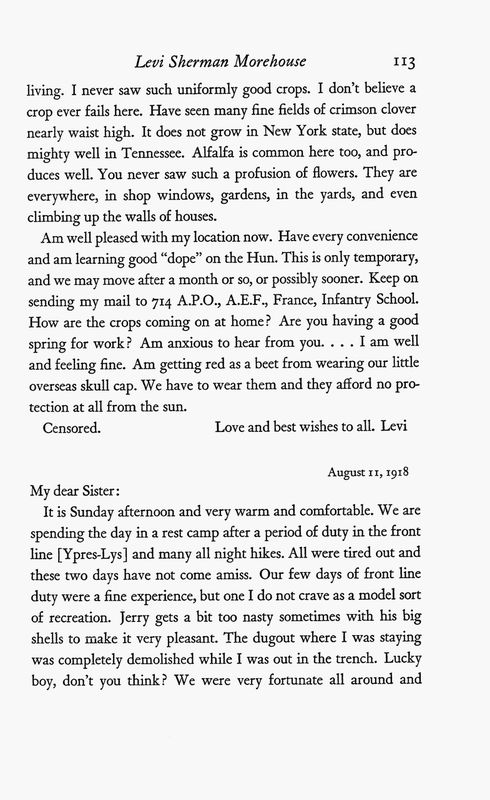 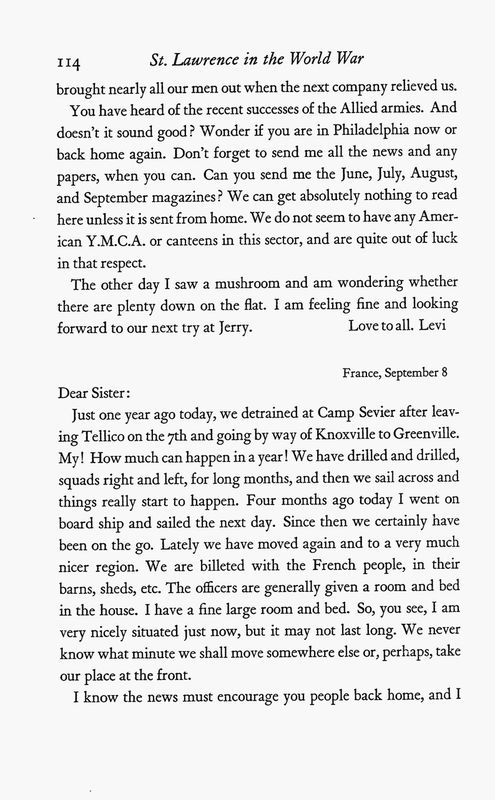 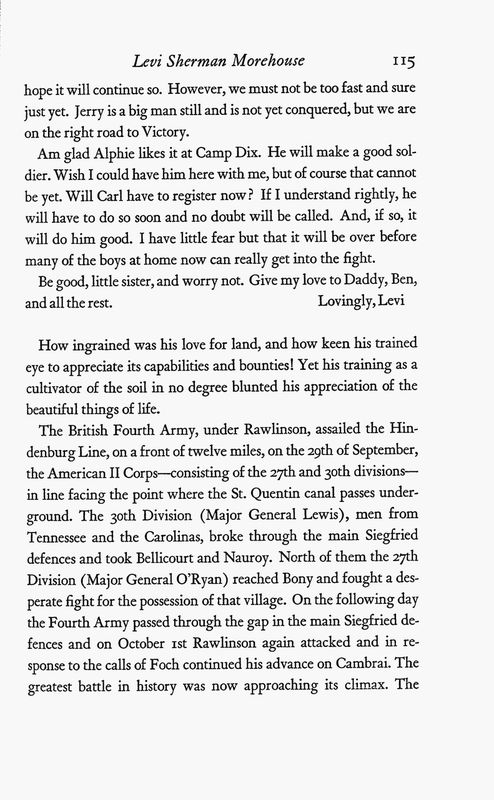 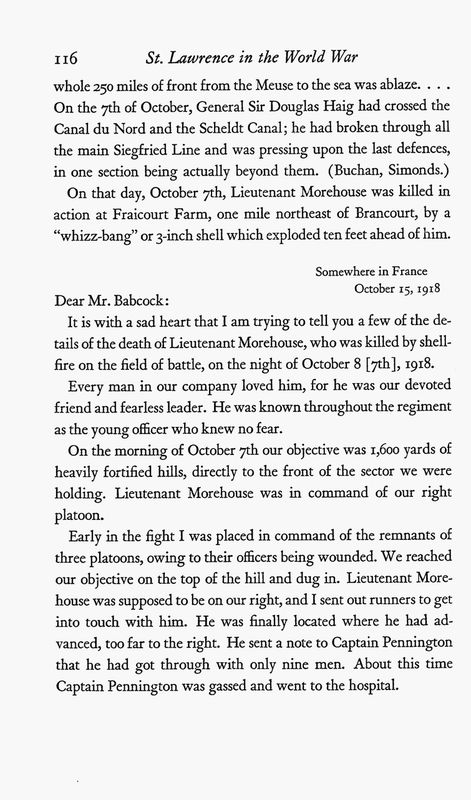 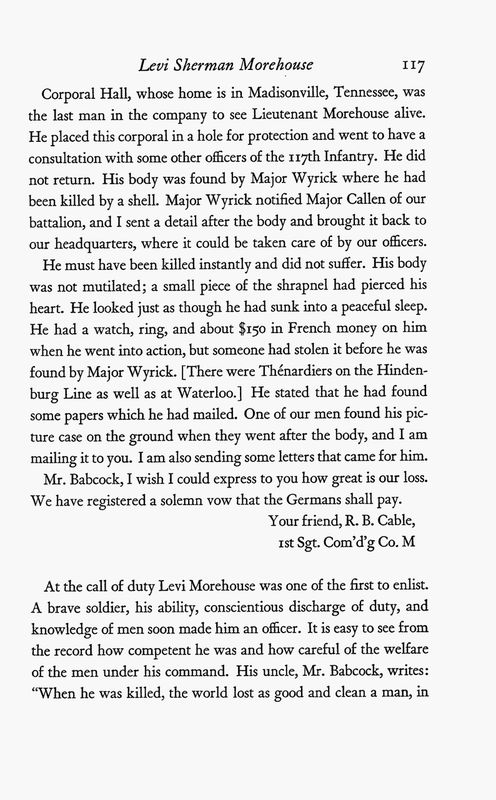 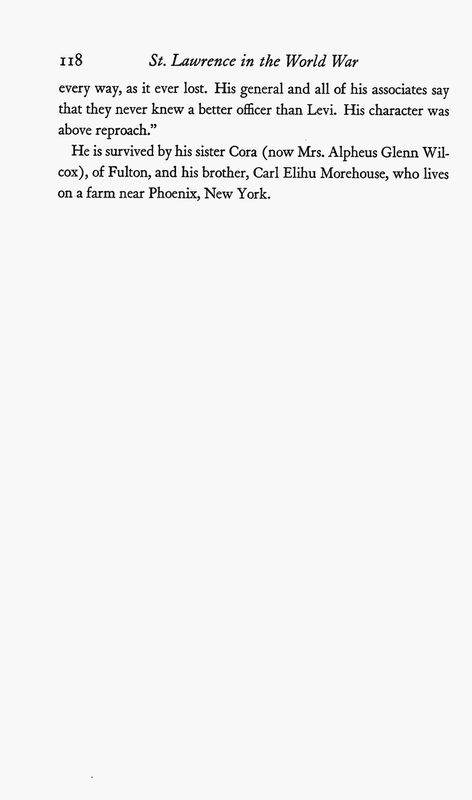 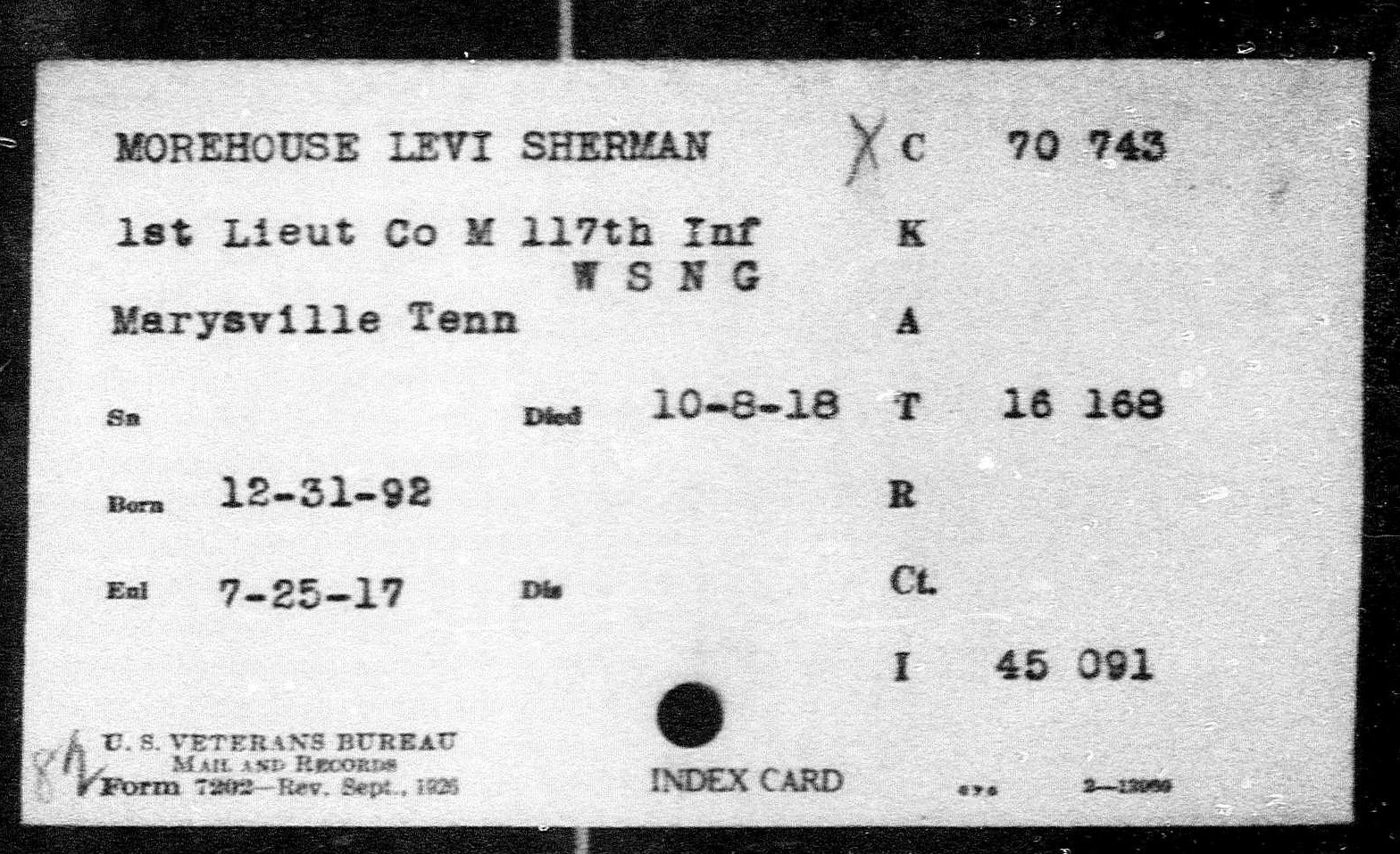 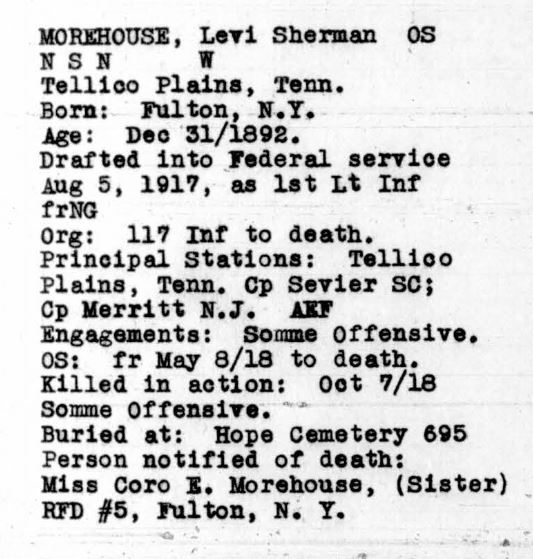 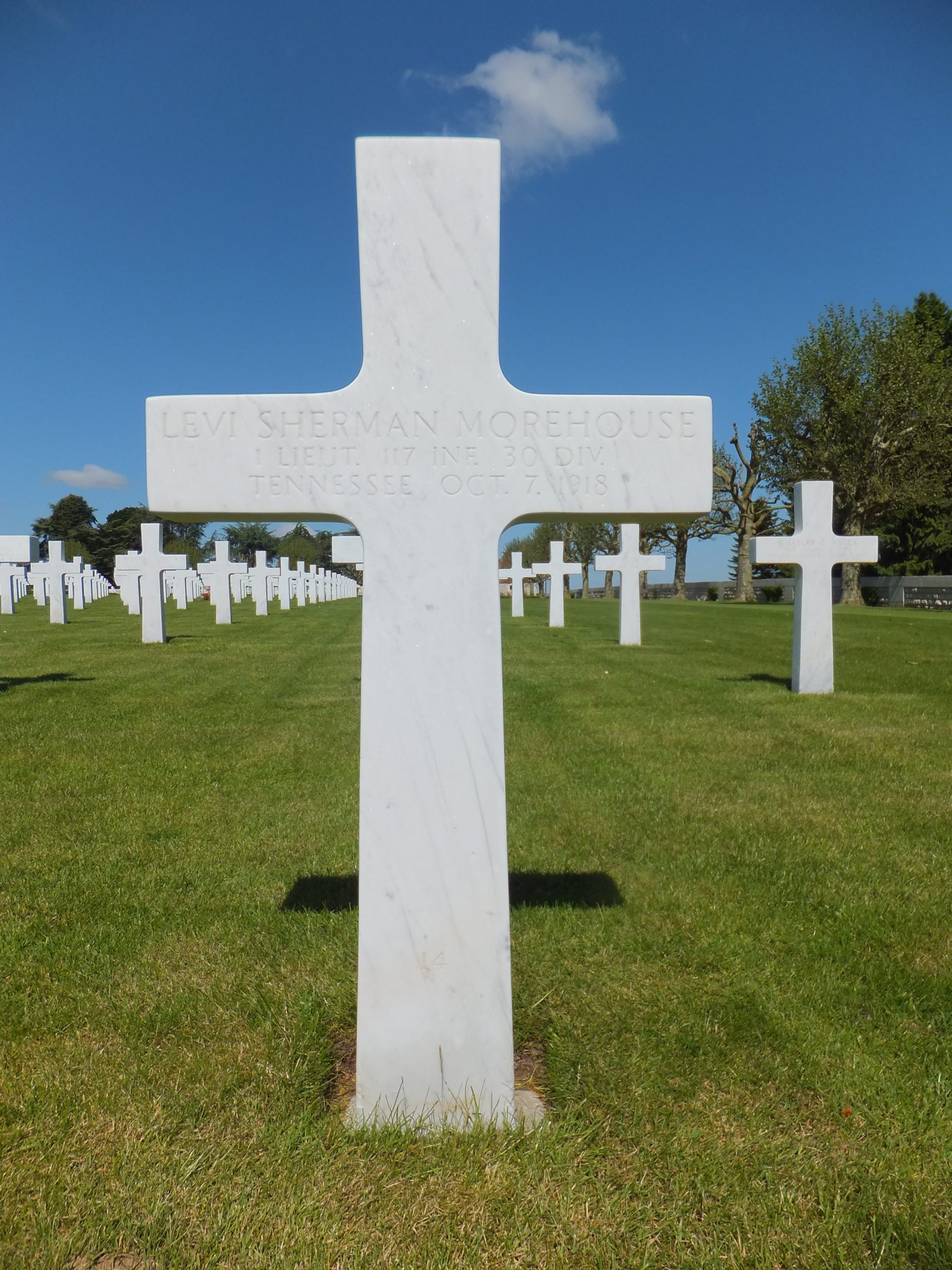