The Knoxvilel News-Sentinel, August 20, 1944
Pvt. Lester G. Gardner, who was reported missing in action in the European area since April 28, was killed on that date, his parents, Mr. and Mrs. A.F. Gardner of Wilson Road, Route 1, have been officially notified. Pvt. Gardner had been in service 28 months and overseas two years. He was a shore regiment engineer and had been stationed in several different countries since entering the service. 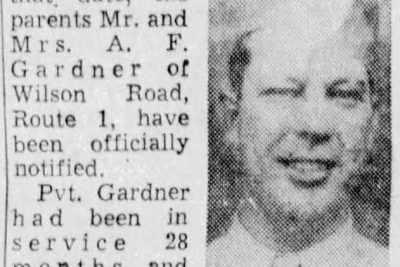