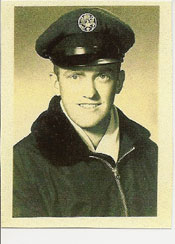 MSgt Leon Coada retired from the Air Force after twenty years of service. Serving in the States along with Korea, Germany, Vietnam, Greenland and Okinawa. He was raised in the Cable Mill house in Cades Cove, TN until the park took it over then moved to Maryville before voluntarily joining the Air Force, retiring and living in Knoxville until his death in April 2009.
Submitted by Teri Coada