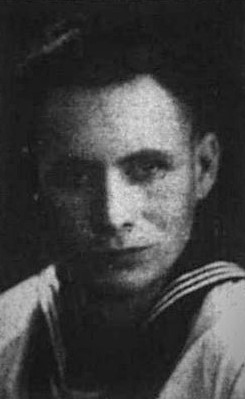 Leelon Thomas Phillips enlisted in the U.S. Navy on December 7, 1937, serving 39 months in China and the Philippines. He re-enlisted December 7, 1941. He died in Brooklyn Navy Hospital January 7, 1942, at the age of 22. He was a member of McCalla Venue Baptist Church and graduated from Knoxville High School. Son of Mr. and Mrs. L. Phillips, 208 Fern St., Knoxville.
Burial at Lynnhurst Cemetery, Knoxville

Leelan Thomas Phillips, 22, son of Mr. and Mrs. Leelan Phillips, 208 Fern Street, died at 10:45 p.m. Wednesday at the Naval Hospital in Brooklyn, N.Y. He had served four years in the Navy and reenlisted on Dec. 7. The young man was a petty officer. He visted his parents here before the Christmas holidays but was called back to New York after the United States declared war against Japan.
Surviving are his parents; four sisters, Mrs. Lucille Hayes, Mrs. Violet McGhee, Ione Waldrep and Miss Martha Evelyn Phillips, and a young brother, Chester Phillips, all of Knoxville.
Mr. Phillips was  a member of McCalla Avenue Baptist Church. The body will arrive in Knoxville today. McCarty’s will have charge. 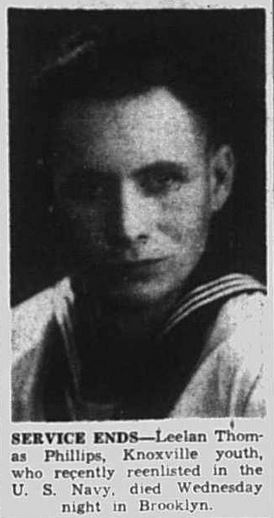 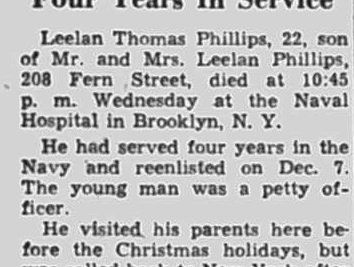