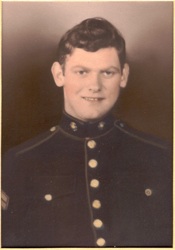 Lawrence Everette Lett was born on August 21, 1932, in the Fountain City community of Knoxville. He was the son of Grant and Hazel Wells Lett and attended Central High School.

He enlisted in the United States Marines and served with the First Marine Division. While he was serving his tour in Korea, he was killed in action by enemy gunfire on October 27, 1952. Corporal Lawrence Everette Lett was awarded The Navy Cross for his valiant service to his county in the final moments of his life. The Navy Cross citation reads:

Lawrence Everette Lett Citation. The Navy Cross is presented to Lawrence Everette Lett, Corporal, U.S. Marine Corps, for extraordinary heroism while serving as a Squad Leader of Company I, Third Battalion, First Marines, First Marine Division Reinforced, in action against enemy aggressor forces in Korea on 27 October 1952. Participating in an attack to recapture a vitally important sector of the main line of resistance which was previously overrun by the enemy, Corporal Lett fearlessly led his squad through intense enemy artillery, mortar and small-arms fire to reach his portion of the objective and single-handedly charged several enemy bunkers, hurling hand grenades and firing his rifle to rout the hostile troops. Although painfully wounded at point-blank range by hostile machine-gun fire from one emplacement, he succeeded in completely destroying the enemy position. When his men became separated from the platoon, he gallantly continued in the attack until the enemy was forced to withdraw and then reorganized his squad to assault a second objective. Throughout this action, he constantly exposed himself to withering hostile fire and, moving into an enemy trench, courageously engaged three enemy soldiers in hand-to-hand combat until he fell, mortally wounded. By his indomitable fighting spirit, valiant leadership and marked fortitude in the face of heavy odds, Corporal Lett served to inspire all who observed him and contributed in large measure to the success of his squad in accomplishing its mission. His great personal valor reflects the highest credit upon himself and sustains and enhances the finest traditions of the United States Naval Service. He gallantly gave his life for his country. Authority Board Serial 1084 December 14, 1953.

He was also awarded the Silver Star for Conspicuous Gallantry during the fight for Bunker Hill in August 1952. In addition, Corporal Lett was awarded the Purple Heart, the Combat Action Ribbon, the Korean Service Medal, the United Nations Service Medal, National Defense Service Medal, and Korean War Service Medal. He is buried at Lynnhurst Cemetery, Knoxville.

The Silver Star was presented to his family for his action on the 12th and 13th of August 1952.
SILVER STAR CITATION:
The President of the United States of America takes pride in presenting the Silver Star (Posthumously) to Corporal Lawrence Everette Lett (MCSN: 1106261), United States Marine Corps, for conspicuous gallantry and intrepidity while serving as a Fire Team Leader of Company I, Third Battalion, First Marines, FIRST Marine Division (Reinforced), in action against enemy aggressor forces in Korea, on 12 and 13 August 1952. When his fire team was cut off by an enemy attack during a patrol forward of friendly lines while the company was engaged in defending a vitally important hill position against a fanatical enemy force, Corporal Lett fearlessly led his patrol through a hostile trench and boldly engaged the enemy in hand-to-hand combat, inflicting heavy casualties on the opposition. Leading his men back to friendly lines, he reorganized his team and moved into positions on the platoon front, directing and encouraging his men throughout the remainder of the night in repelling a numerically superior enemy force. On the following morning he aggressively led his group in an assault on an enemy bunker and, although twice painfully wounded during the ensuing hand-to-hand struggle, steadfastly remained in command throughout the successful assault on the enemy fortification, effectively covering the tactical withdrawal to friendly lines. Refusing medical aid until the more seriously wounded were attended, Corporal Lett, by his skilled leadership, indomitable fighting spirit and courageous initiative in the face of heavy odds, served to inspire all who observed him and upheld the highest traditions of the United States Naval Service.
Action Date: August 12 & 13, 1952

A 20-year-old United States Marine ran through intense artillery fire, single-handedly charged into enemy bunkers, and engaged three soldiers at once in hand-to-hand combat before succumbing to gunshot wounds sustained on the battlefield in Korea. Knox County Mayor Tim Burchett on Tuesday dedicated Connor Road bridge over Bullrun Creek in honor of this Knoxville-born Marine, Cpl. Lawrence E. Lett, who was killed in action on Oct. 27, 1952.

“My family is very proud of what my uncle did,” said Mark Lett, Cpl. Lett’s nephew. “He was killed in action 63 years ago (Tuesday). This bridge dedication means a lot to us.”

The ceremony was held in the parking lot of Sunny View Baptist Church in Powell, with many members of the Marine Corps League and local political figures in attendance.

“It’s called the forgotten war, but to Tennesseans there isn’t any war that’s forgotten,” Burchett said. “I owe everything but my salvation to the people in uniform.”

Born in 1932 in the Fountain City community of Knoxville, Lett dropped out of Central High School and went on to enlist in the Marines when he was 17. According to his Navy Cross citation, Lett was a squad leader in Company I, Third Battalion, First Marines, First Marine Division Reinforced. Lett died while recapturing an important area in the main line of resistance in Korea.

“Corporal Lett fearlessly led his squad through intense enemy artillery, mortar and small-arms fire to reach his portion of the objective and single-handedly charged several enemy bunkers, hurling hand grenades and firing his rifle to rout the hostile troops,” the citation reads. “Although painfully wounded at point-blank range by hostile machine-gun fire from one emplacement, he succeeded in completely destroying the enemy position.”

Lett went on to on to advance to another objective, where he engaged the three soldiers before dying of his wounds.

Lett was highly decorated posthumously for his actions, receiving the Navy Cross, Silver Star and Purple Heart, among many others.

U.S. Sen. Bob Corker sent a letter to Lett’s family for the occasion, recognizing the Marine’s “great courage and service to our country during the Korean War.”

“The service and sacrifice of Cpl. Lett represents the absolute best our country has to offer,” Corker wrote. “We are privileged to live in the greatest nation in the world, and this is made possible by brave men and women such as Cpl. Lett.”

In picture below:
Knox County Mayor Tim Burchett, center, talks with Mark Lett of the Knox County Veterans office, left, and Eric Nash of the Marine Corp League during the dedication ceremony of the Connor Road bridge in memory of U.S. Marine Cpl. Lawrence E. Lett on Tuesday. Cpl. Lawrence Lett, who is Mark Lett’s uncle, was killed in action in Korea on Oct. 27, 1952. He is a recipient of the Navy Cross, Silver Star and Purple Heart. 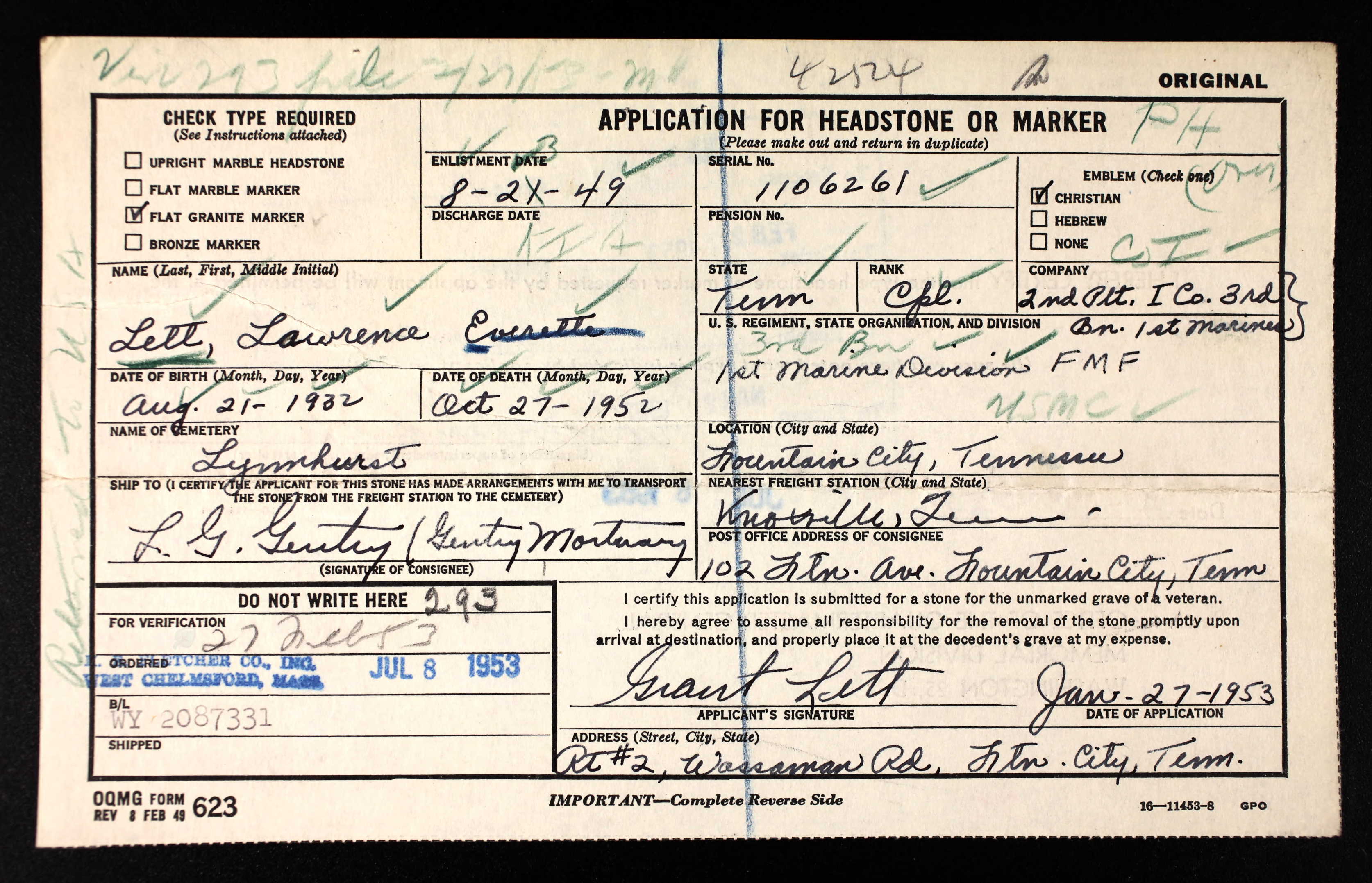 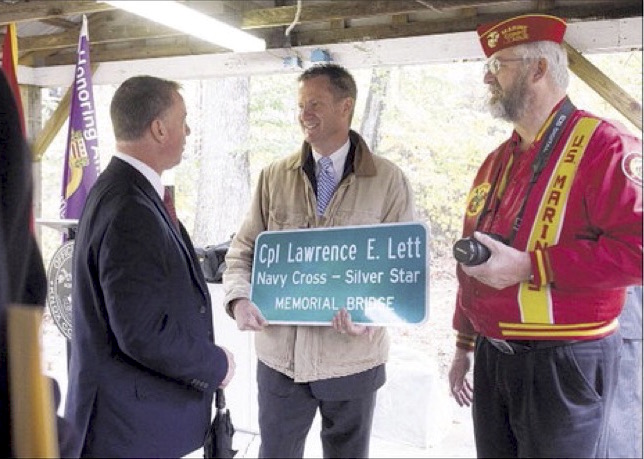 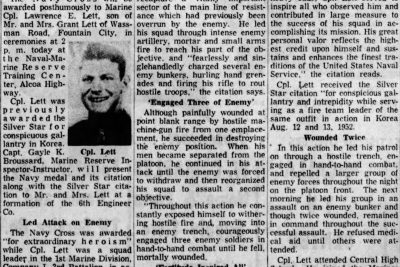 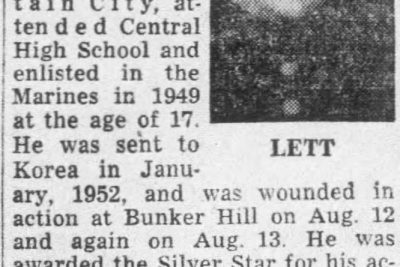