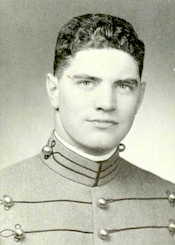 Lawrence Byron Tatum was graduated in 1953 from the U.S. Military Academy at West Point, N.Y. He served with Tactical Air Command squadrons at Foster AFB, Texas and at Itazuke AFB, Japan. He earned his Ph.dD. from Syracuse University in 1961 and taught in the political science department at the United States Air Force Academy in Colorado Springs, Colorado, from 1961 until 1965.

Colonel Tatum was a member of the 1st Air Commando Squadron, Pleiku Airbase, South Vietnam. On September 10, 1966, he was the pilot of a Douglas Skyraider Attack Aircraft (A1-E) on a strafing mission just north of the Demilitarized Zone, North Vietnam, when his aircraft was struck by hostile fire. He managed to eject and parachuted into a tree, when communication with him was lost. His remains were not recovered. His name is inscribed on the Courts of the Missing at the Honolulu Memorial. He is memorialized on the Vietnam Veterans Memorial on Panel 10E, Line 85. The following are tributes to Col. Tatum:

I had the privilege of serving with By Tatum on the faculty of the Department of Political Science at the Air Force Academy from 1960 to 1964. By was a distinguished scholar and teacher, and possessed of all the skills, character and professional qualities that his colleagues associated with the very best military officers. He was destined, we felt, for the highest leadership positions in the Air Force, before his untimely death in Viet Nam. He was deeply admired during his life, and has been sorely missed by his friends and family.
Posted by: Dr. Jack E. Freeman
Relationship: We were close friends
Monday, May 30, 2005

Colonel Lawrence Byron Tatum was a distinguished graduate of the USMA in the Class of 1953. Originally listed as MIA on 9-10-1966. He was believed for some time to be a POW but this was never substantiated and he was finally  officially declared deceased on 11-10-1976. Know as one of the fines of USAF Flyers he may well have gone on to a long and illustrious career. He was awarded the Purple Heart posthumously.
Posted by: Clay Marston
Relationship: Friend
Tuesday, January 19, 1999

Today, I was privileged to receive an MIA bracelet for Lt. Col. Tatum, whom I never knew. He graduated from West Point the year I was born, and was lost just as I was starting high school. How painfully I recall those turbulent years. As young activists, we did not understand the difference between a war we opposed and our brothers who fought, much to our shame and their suffering. Let us right that wrong with our remembrance and support.
Posted by Barbara Williams 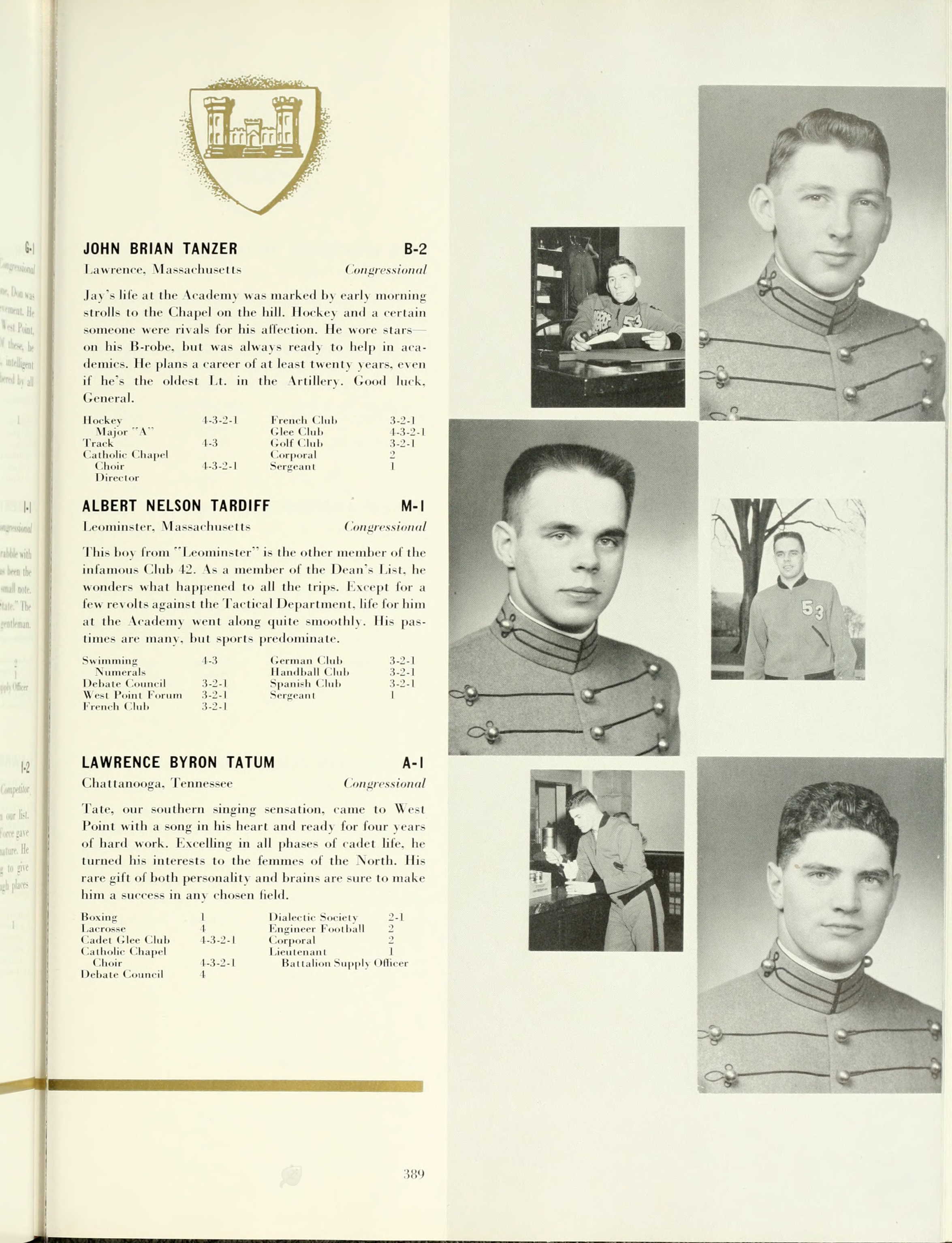 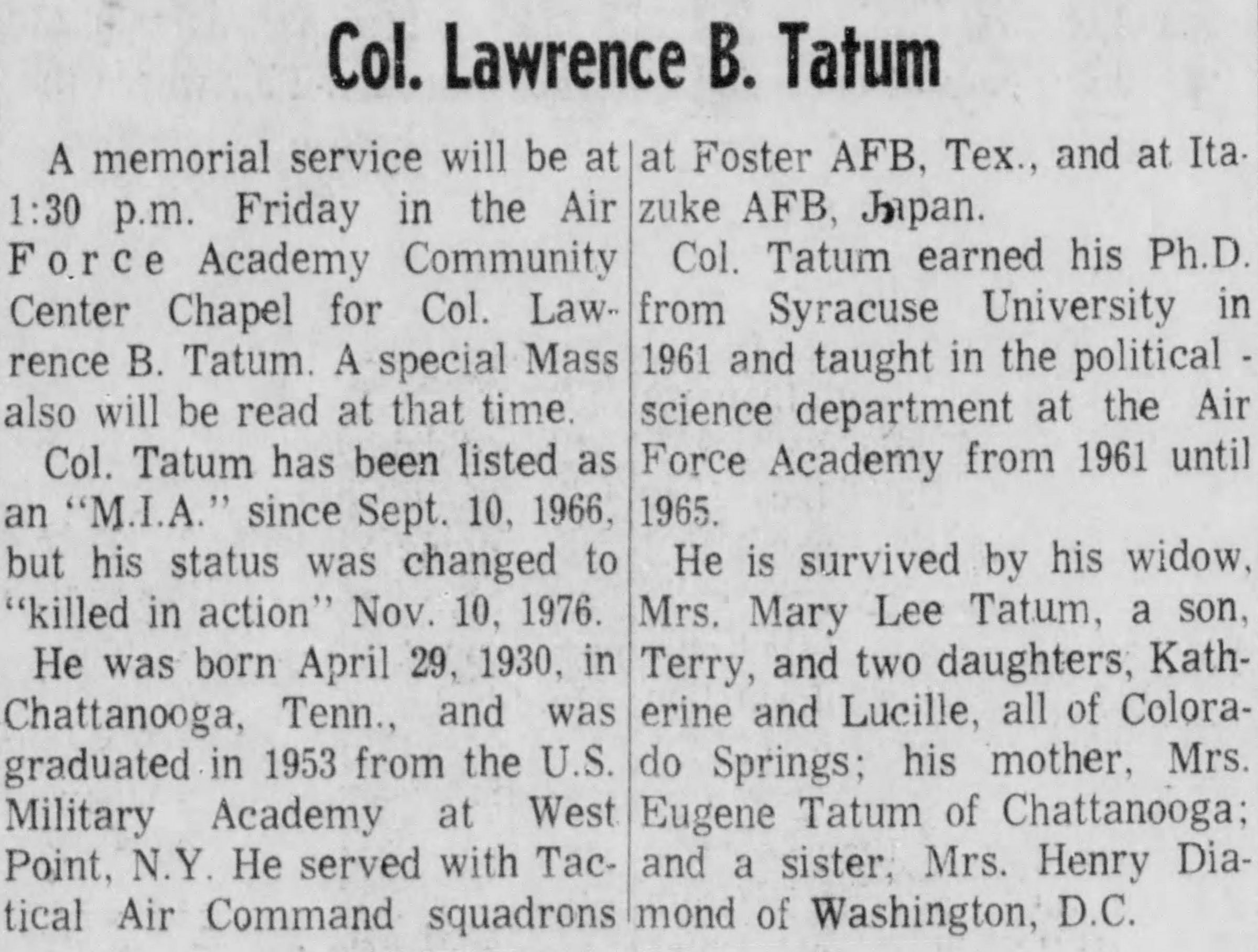 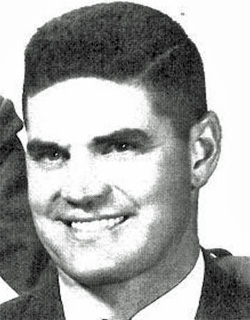 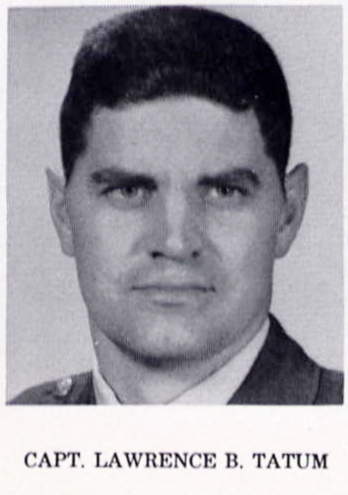