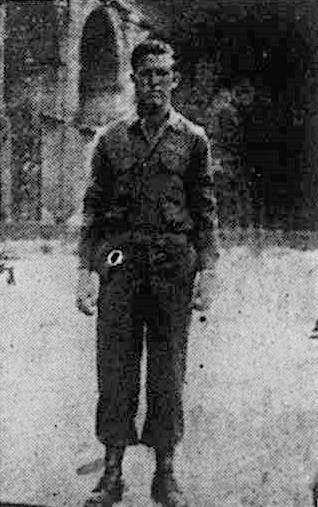 Crossville Chronicle, March 17, 1949
Last rites for Lawrence Bates Smith were held March 13th in the Camp Ground Cemetery. The complete military ceremony was used along with a sermon from Rev. Dome Todd. Lawrence B. Smith, was born on March 3, 1925 and was killed in France August 17, 1944. He had been a member of the Homestead Baptist Church since he was 15 years of age. He attended the Homestead Elementary and High Schools. His smile will be missed by his family and many friends.
He is survived by his father and mother, Mr. and Mrs. Harlan Smith; one sister, Mrs. Ray C. Allred; three brothers, Hollis, Kenneth and Ray; his maternal grandfather, Hillery Miller and his paternal grandmother, Bell Smith. Also a host of friends who mourn his loss.