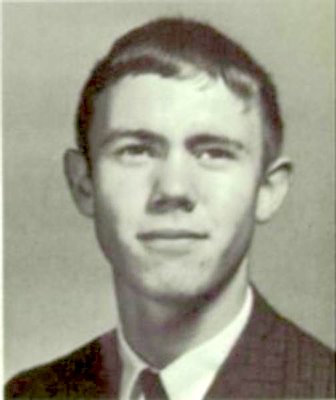 Airman First Class Larry Dale Love was born on May 16, 1950, and was originally from Tazewell, Tennessee. He served his country in the Vietnam War in the United States Air Force, in 366th AMS Squadron, 366th CBT SPT Group, 366th Tactical Fighter Squadron, 13th Air Force. His tour in Vietnam began on November 29, 1970. On January 15, 1971, AFC Love was killed in a vehicle crash in Quang Nam province, South Vietnam, at the age of 20. He is memorialized on the Vietnam Veterans Memorial on Panel 5W, Line 45.

Larry and I went through tech school together at Lowry AFB in Denver, Colorado. I went to Da Nang, Vietnam in April 1970. Larry arrived in November, just before I went on a TDY to the Philippines. Just before I got back to Da Nang, Larry was killed in a rocket attack. Our friends told me that after a first round of incoming rockets, Larry went to the site of a rocket impact, to see if he could help anyone. Then, as was typical of the Viet Cong, they launched a second round, hoping to kill anyone who was trying to help the wounded from the first round. Larry was killed in that second round of rockets. Larry was a terrific guy, who got along with everyone. He was killed at Da Nang AB, in Da Nang Province, Vietnam. Also, the organization was 366 TFW (Tactical Fighter Wing), rather than Tactical Fighter Squadron. I hope this information is meaningful to anyone who knew Larry.
–Submitted by Patrick Reall