New Castle, Pennsylvania, 2 November 1942
Murder-Suicide Near Boston
Army officials were conducting an investigation of two Tennessee soldiers at an army camp near Boston. Privates William H. Jones of Silver Point, and Kermit E. Petit of Vonore, both of Tenn. Were discussing a double date from which they both had just returned. Private Jesse P. Frazer of Woodsville, Ala., heard Jones say, ´It doesn´t make any difference. You´ve gone on your last guard duty´.  Three shots followed and Petit fell to the floor.
Jones ran from the building, according to army authorities. Frazer ran to get aid for the victim. He heard a fourth shot and found Jones´ body lying in the road with his rifle under him. 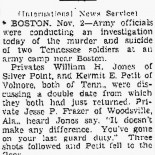 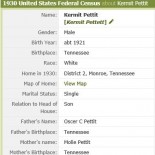