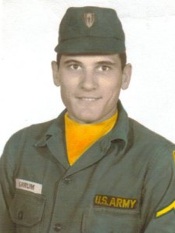 Specialist 4 Kenneth E. Shrum was born on May 12, 1943, and was originally from Chattanooga, Tennessee. He served his country in the Vietnam War in the United States Army, as an armor reconnaissance specialist in 3rd Platoon, A Troop, 3rd Squadron, 4th Cavalry, 25th Infantry Division. His tour began on January 4, 1966. On October 15, 1966, SP4 Shrum was killed under hostile conditions in South Vietnam; he was 23 at the time of his death. SP4 Shrum is buried at Oak Grove Cemetery in Marion County, Tennessee, and is memorialized on the Vietnam Veterans Memorial on Panel 11E, Line 78. He was the recipient of the Bronze Star and Purple Heart medals for his service.