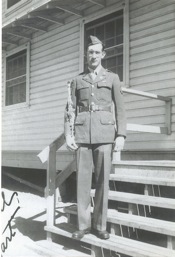 From Bunker Hill to Baghdad, the citizen soldier has played a vital role in our military history. These patriots laid down their plow shares and took up the sword when our nation called. Many gave their lives on foreign soil to preserve our freedom here at home.

One such citizen soldier was Kenneth Brown Hart of Knoxville. Quiet and of slender build, he was an unlikely warrior. He wore wire-rimmed glasses, loved to play his clarinet, and had an aptitude for math. Kenneth was a ’38 graduate of Knoxville High where he was a member of the band. He completed 2 years at the University of Tennessee as an engineering major. As a member of the UT marching band, he participated in the Orange Bowl and Rose Bowl parades. In 1940 he joined the Tennessee National Guard. One year later he married his high school sweetheart, Hazel.

Assigned to the 191st Field Artillery Band, he continued to play his clarinet. Kenneth and Hazel spent 2 years together at an Army Post in California where he trained for combat. Their final good-bye was in the spring of ’44 in New York as Kenneth shipped out for Germany. By June he had entered the European Theater and had been reassigned to the 1st Infantry Division 18th Regiment 1st Battalion Company C. The “Big Red One” helped to chase the retreating Germans across France to the Siegfried line.

Control of the dams of the Ruhr River Valley was a major objective of the allies. All that stood between them and the dams were 70 square miles of dense fir trees and rough terrain known as the Hürtgen Forest. It was infested with determined German troops that were intent on repelling the Americans. The Germans had reinforced this natural barrier with concrete bunkers, pillboxes, and heavy artillery. Often overshadowed in history by Operation Market Garden and the Battle of the Bulge, the Huertgen Forest has been referred to as a “meat grinder.” The records show that for every yard gained, it took more lives than any other American objective in Europe.

Against this backdrop, Kenneth’s unit fought through the Hürtgen Forest. November 22,1944 was cold and rainy, mixed with intervals of snow. Company C was trying to take Hill #203 according to battle reports. The Germans had the high ground and launched a deadly barrage of mortar and artillery and almost decimated Company C. Kenneth Hart died instantly that day from artillery shrapnel while taking shelter in a foxhole. Company C fought on despite the losses. On November 27, a platoon from that company charged the hill. After 10 minutes of savage hand-to-hand fighting, the hill was in American hands. Only 2 American officers and 6 enlisted men were left of that platoon. Hill 203 has been described by members of the 1st Battalion as the fiercest fight they encountered in the war. The Americans finally took the Hürtgen Forest and the Roer Valley. The final butcher’s toll was over 24,000 American dead, killed, or missing. Another 9,000 were victims of frostbite, trench foot, and battle fatigue. It took 5 months, 9 divisions, a parachute regiment, and a Ranger battalion to take the Huertgen Forest.

I never had the opportunity to meet my Uncle Kenneth as I was born almost a decade later. My Aunt Hazel never remarried and spent her life helping others as a registered nurse. She passed away at the age of 83 in the fall of 2001. She was laid to rest next to the husband of her youth. Separated in life, they are reunited now forever. Aunt Hazel left me Kenneth’s Purple Heart, Army clarinet, and other memorabilia from that time. Although Kenneth has been gone for 60 years, his legacy will live on. I think my Aunt Hazel would be pleased. May God bless our citizen soldiers of yesterday and today.
–Submitted by David Hart 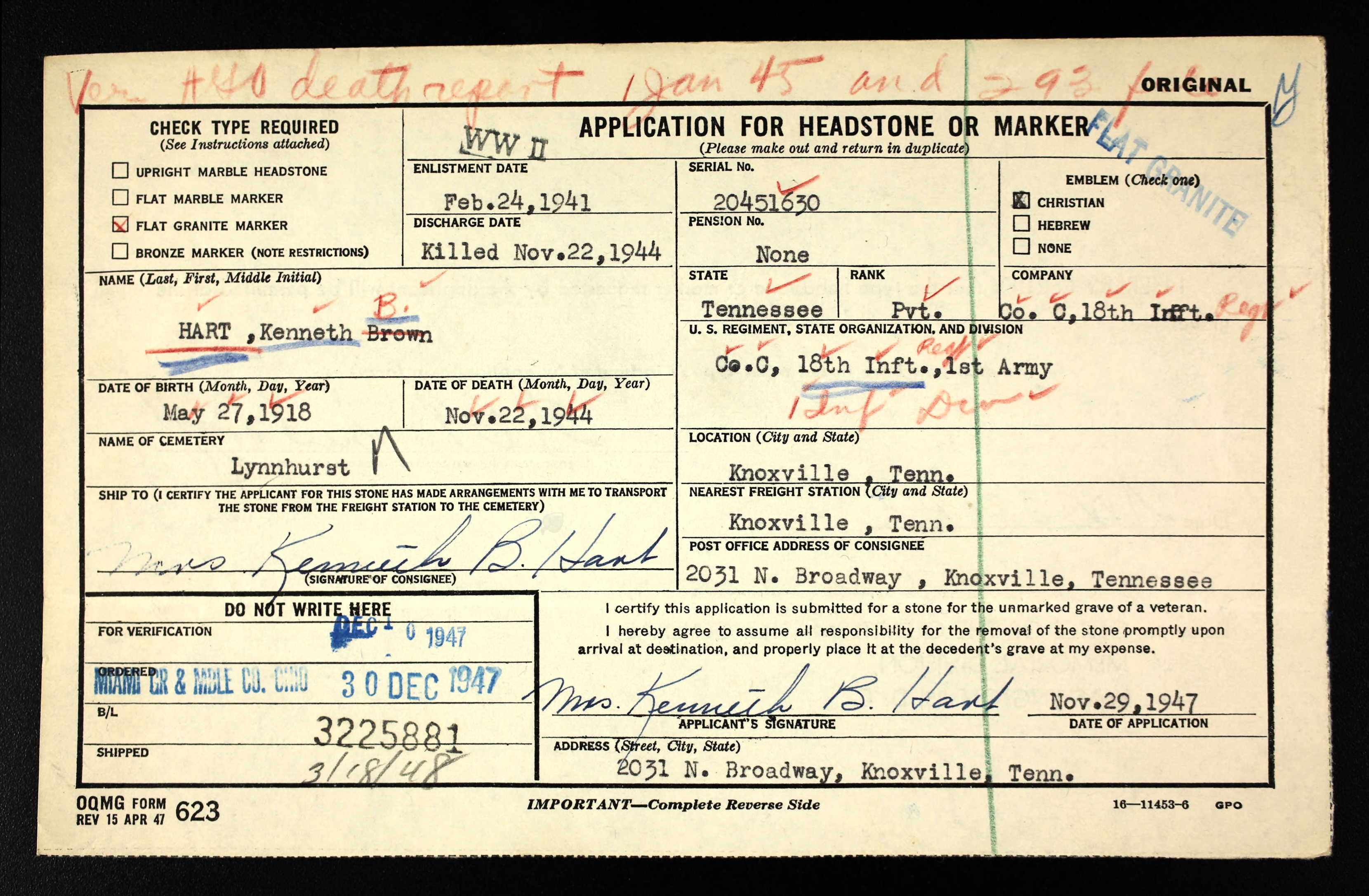 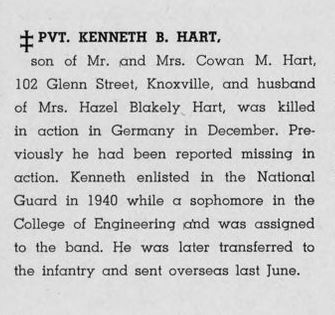