Ivan McWhorter was my mother’s brother. An uncle I never got to know. A young life
taken by the scourge of war. A life given for his family and country’s freedom. He joined the Marine Corp. reserves in Chattanooga, Tennessee, and was deployed to the south pacific where he was gravely wounded on the island of Okinawa. He died of his wounds back in the States. He received 2 purple hearts and other combat
decorations for his courage and sacrifice. He has long been gone but he and his sacrifice will not be forgotten by our family. His medals and story are passed along to succeeding generations in honor of his life.
–Submitted by David McMahan
Spec. 4th Class
United States Army Reserves 1967-1973 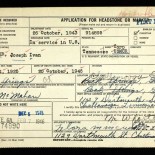